Every insurgency is sui generis, yet there are interesting parallels between southern Thailand and the southern Philippines, raising the question: Could the Thai government replicate the Mindanao peace process? Possibly, but not without a fundamental change in its thinking. 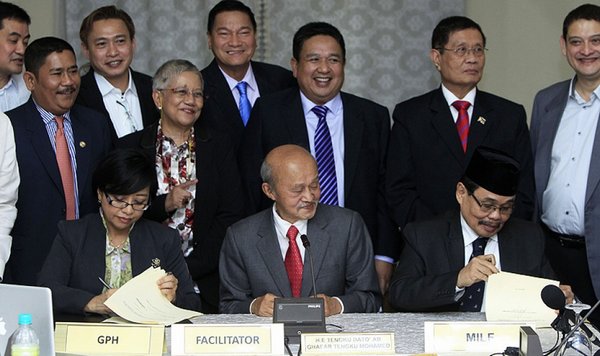 - Both sides reached the conclusion that there was nothing more to be gained from fighting; indeed, war had become counter-productive.

- There was third-party involvement at every stage of the process, and neither side saw their inclusion as a violation of their sovereignty.

- The peace agreement creates a true devolution of powers and established an entirely new parliamentary system of government for the Bangsamoro. This will not be easy to implement, but it was a creative solution to a complex problem.

- The government agreed to establish a parallel sharia court system.

- There has been broad public buy in through the involvement of civil society, directly, through workshops, public forums, congressional hearings (often in Mindanao) and social media.

- Finally, inclusion into the Bangsamoro will be done through a plebiscite, or referendum.

None of these would have been possible without the statesmanship demonstrated by both President Benigno Aquino and Chairman Murad Ebrahim, who made enormous concessions, successfully sold them to their constituencies and neutralised spoilers. They were willing to think outside the box and not be trapped by old paradigms.

Neither the conditions that made the peace process in Mindanao successful, nor the concessions the two sides made, are present or likely in Thailand today.

Thai security forces and the insurgents both currently seem to believe that there is more to be gained by fighting than talking. Both are achieving their short-term goals. In recent interviews with Malay activists, all believe that violence has to go up for the government to come back to the table. The military believes that the insurgents can be effectively degraded and divided to the point that few concessions will be necessary.

There is no financial pressure to settle. For the militants, the insurgency is low cost: Improvised explosive devices are largely made from stolen materials. Small arms and ammunition are taken from victims. The military has dedicated only a fraction of its budget to the insurgency. Moreover, the National Council for Peace and Order (NCPO) raised the 2015 defence budget by 5% to 193 billion baht with no external threats. Between 2004 and 2013, the government claims to have spent 200 billion baht in the South.

As long as the majority of violence is directed at security forces or against perceived legitimate targets such as informants and is largely away from urban population centres, there will not be a critical mass to compel either side to negotiate. The residents of the South have learned to live with the violence.

There is also no consensus about the peace process amongst the insurgents. There are at least five different groups, the BRN, BIPP, Pulo, New-Pulo and the GMIP. They are horizontal, autonomous and fierce rivals over the leadership of the movement. This explains their disorganised negotiating stance, such as their five conditions issued in April 2013. There is little external pressure on either to negotiate. Thailand has effectively prevented the international community from getting involved. While the Philippines is still labelled as a terror hotspot with travel warnings, Thailand barely registers because there has been only one Westerner killed since 2004, and the insurgency has stayed contained in the South.

Although the insurgents planted a large bomb in Phuket in December 2013, it was meant as a message; it did not have to be detonated. The rare attacks in Hat Yai are enough to get Bangkok's attention without garnering negative attention from the international community. In the litany of grievances the international community has against Thailand, the insurgency is a low priority.

The military-controlled government will countenance no third-party involvement. They cannot accept anything that infringes upon their sovereignty, though no peace process has been successful without some degree of third-party involvement. Malaysia's role will be limited to setting up meetings because Thailand does not believe they are neutral. Malaysian authorities have arrested Thai insurgents, but are clearly fearful of cracking down on their operations. Foreign NGOs are largely mistrusted by the junta.

At a time when the military-backed government is consolidating power in Bangkok, any devolution of power seems far-fetched. Both the interim charter and future constitution will emphasise that the Kingdom is one and indivisible. The Thai state will be unitary and inviolable, which precludes any type of political autonomy or devolution of powers, however limited.

Beyond that, the junta's track record since the May 22 coup has been completely uncompromising. The NCPO is unlikely to make concessions on issues that the army has thwarted civilian leaders from making over the past 10 years. While the stalled peace process was attributed to the political gridlock in Bangkok last year, talks had largely come to a standstill because of the army's opposition.

The army has refused to implement a general amnesty. Proposed amnesties have been so highly conditioned that few insurgents trust them. The military rejected the BRN's April 2013 demand for the release of everyone detained on security-related charges. Increasing accountability and ending the security forces' culture of impunity will not happen in the current political situation. If anything, the military really seems to be here for the long haul. There are more troops and rangers deployed across the South, and they are operating more aggressively.

Thais remain largely prejudiced towards the Malays of the South and still believe that they are the only minority group that has really failed to assimilate into Thai society. They will not accept any responsibility for what the Malays believe to be historical wrongs or the concept of a Pattani "ancestral domain".

The BRN included the recognition of the "rights of the Melayu Pattani peoples to Pattani land" in their April 2013 demands; this was rejected outright by the army. The government is likewise unwilling to meet the BRN's demand that it be deemed a "liberation movement" rather than a "secessionist group" as the former suggests that they have legitimate grievances and that they are under occupation.

Likewise, it seems unreasonable to countenance the establishment of a transitional justice mechanism to investigate human rights abuses committed by the military. The government has rarely waived immunity for its troops except in the most egregious cases, and done little to investigate allegations of abuse, including the National Human Rights Commission's findings that 75% of torture complaints were filed in the South between 2007-2013. The role of civil society and journalists has been hampered, with extra-judicial killings of activists.

Malay Muslim civil society activists whom I have interviewed have all experienced routine harassment, threats, raids and arrests.

There is nothing harder than a peace process following a protracted conflict. It requires statesmanship, bold decisions, major concessions, an acceptance of external actors, new ways of thinking about problems, and a lot of political capital. It took decades for these to come together in the Philippines. It is not to say that they can't in Thailand, but a lot has to change beforehand.

More than anything, there has to be a change in the government's position that peace is simply the absence of violence. It is about a durable political solution, addressing historical grievances and social justice. The Philippines shows that it can be done, though it takes a lot of political courage and creativity.

Zachary Abuza is a professor and analyst of Southeast Asian politics and security issues. This is an adaptation of his article 'Learning from Mindanao: Lessons For Thailand' in the Indo-Pacific Review. Soldiers patrol at the Krue Se mosque in Pattani province where a massacre took place in 2004. Peace in the restive South seem unlikely when both security forces and the insurgents believe there is more to be gained by fighting than talking. EPA