The big issue: Almost six months and what?
Opinion

The big issue: Almost six months and what?

Martial law and rule by the generals hits a milestone in two weeks — six months under the men in green and still many more questions than answers about where Thailand may be in a year, two years and 10 years down the road.

The accomplishments of the National Council for Peace and Order (NCPO) are clear. They seem clear because they were pretty simple for an autocratic regime that seized power on May 22 and held it very tightly up until today.

There is peace on the streets because red shirts and yellow have been talked down when possible, stomped down when they seemed recalcitrant. Preventing political violence without actually killing people to do it is definitely an achievement. For decades, the Royal Thai Army has so rarely been able to deliver such goods.

“Returning happiness” remains a goal and not an actual masterpiece. But some footpaths are clearer. Some beaches have no more deckchair mafia. If reconciliation is still just a glimmer in The Leader’s eye, a little bit of the nastiest political rhetoric from both sides has been cooled.

On the other hand, the military leadership has not shown the ability to continue enforcement of even its simplest edicts. The attempt to control the price of lottery tickets not only failed, but the ticket mafia never lost a moment’s sleep. The van mafia is running the parking protection racket at Victory Monument again after being banished by troops. The motorcycle taxi mafia is back in control of the street-corner waiting shelters. 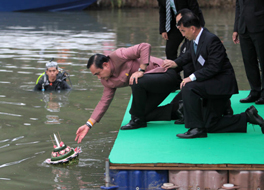 Prime Minister Prayut Chan-ocha releases a floating basket, or krathong, on the Loy Krathong Day, which falls on Nov 6 this year. (Photo by Chanat Katanyu)

Last week, the premier warned food vendors to stop using cooking-gas prices as an excuse to raise prices. But they did, and they will.

Far worse are the recent questions about the fortunes of lifetime public servants, including The Leader and his brother. Gen Prayut Chan-o-cha has talked of deals and land and assets worth tens of millions of baht, and the public gained little confidence from the assets lists produced by cabinet ministers and members of parliament. Men who have spent their lives earning salaries from taxpayers in five digits have eight- and nine-digit fortunes.

The economy has become a particular problem — as it did for the undoubtedly incompetent coup government of 2006-07. Last week the economy tsar and Deputy Prime Minister Pridiyathorn Devakula said Thailand might achieve growth of 1.5% this year. He drew criticism for being too optimistic.

Credit “Mom Oui” for not only refusing the political gambit — “The last government did it” — but for even taking some blame himself. The bureaucracy has been slower than a three-legged turtle releasing billions of baht in stimulus money. So far, the stimulus announced by the junta has had no effect on the economy. That’s MR Pridiyathorn’s assessment, not ours.

And the junta managed to get far up the nose of the foreign business community and investors. As reported in Bangkok Post Sunday a week ago, new rules will put heavy restrictions on joint investors. They will both change the rules without notice or fairness and bring resentment from current and future investors.

That is not a good thing when Myanmar is the new darling of early adopters and Vietnam is making all-out efforts to attract business.

The Joint Foreign Chambers of Commerce in Thailand are wondering aloud why a regime in power for a self-stated short term is making policies that will affect the economy for decades to come.

Last week, the country got a Constitution Drafting Committee and a promise of a new charter within 10 months. Reconciliation is going to be a very tough sell. One (red or yellow) side is going to be outraged at the section on punishment for corrupt politicians. The prime minister, with no ideas offered, ordered his cabinet to come up with ideas on how the public can contribute to drafting the charter.

Politically speaking, Gen Prayut is still on his honeymoon, a remarkable achievement in itself after six months of undemocratic rule in this fractious nation.

But he hasn’t yet tackled the hardest goals he set for himself last May. And he won’t be doing it this week either. Time is almost entirely given over to diplomacy at a set of summits in Beijing and Nay Pyi Taw.

Gen Prayut has made it clear he will have the final say on every important new law and regulation — and constitution. Reform of the entire political system and bureaucracy is not likely to be as smooth or as generally popular as the attempt to make the footpaths clean.