Recently scientists concluded that 2014 is on target to be the hottest year recorded. Also, this past weekend delegates from around the world wrapped up the twentieth world conference on climate change in Peru. They agreed upon a watered-down deal. The deal for the first time demands that every country curb its greenhouse gas emissions, but has left unresolved the issue of exactly how much each country must cut. Each country is next year invited, but not required, to reveal how much emissions they plan to cut. 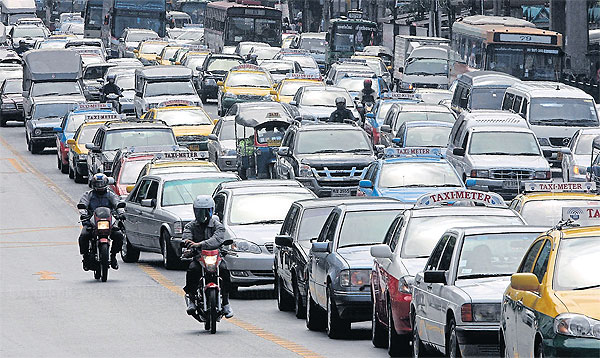 Bangkok’s traffic congestion contributes to much of the city’s greenhouse gas emissions. Bangkok ranks as one of the highest-emitting cities in the world per capita.

Given the current focus on climate change, it is worth examining Thailand’s response to the issue and suggesting ways the country can move forward next year.

While the country’s emissions per capita remain slightly below the global average, the levels have been rising rapidly in the past few years. And, while Thailand as a nation is still classified as a middle-income country and might not be expected to make the same cuts as high-income industrialised countries, Bangkok looks very different.

As an affluent city with a high level of consumption, Bangkok’s commitments should be in line with the industrialised world. Bangkok ranks as one of the highest-emitting cities in the world per capita. A World Bank study revealed that in 2005 Bangkok emitted 43 million tonnes of CO2 (and 7.1 tonnes per capita), only one million tonnes less than London’s total (which emits 5.9 tonnes per capita).

Although Thai policy-makers have declared the positive benefits of mitigating global warming and blamed the devastating 2011 floods on climate change, Thailand (and Bangkok) still has not committed to quantitative targets for emissions reductions.

Unlike many other middle-income countries in the region, the Thai government did not make a voluntary emissions pledge under the Copenhagen Accord in 2009-2010 and has not submitted a Nationally Appropriate Mitigation Action plan to the United Nations Framework Convention on Climate Change (UNFCCC).

The previous government led by prime minister Yingluck Shinawatra drafted a National Climate Change Master Plan 2013–2050, committing Thailand to reduce greenhouse gas emissions by 7% to 20% compared to business-as-usual. The 7% would result from domestic initiatives and the additional 13% would be the result of international support.

However, the master plan provides no clue as to why this range was chosen and does not refer to the need to limit global warming to 2C. And although it was finalised in July 2013, the draft was never approved and the new military government has shown no interest in climate change mitigation thus far.

Indeed, Thailand has worked against international treaties that would require developing countries to make emissions pledges. At the most recent UNFCCC Conference of the Parties in Warsaw in 2013, Thailand became a member of the Like-Minded Developing Countries group of 13 countries, which proposed that under any international treaty only developed countries should be required to cut emissions.

This year the group has stuck to a similar position and also argued that developing countries, unlike rich countries, should be free to volunteer information about their past and planned emission levels as they deem fit. In contrast, to Thailand’s intransigence, at the conference in Peru last week, the country’s regional neighbour, the Philippines, left the Like-Minded Developing Countries group, pledged new emission cuts of its own, and urged other developing nations to follow suit.

Thailand can set a more positive example. Klang municipality in Rayong province is renowned for its environmentally-friendly practices. The municipal government in this small provincial town (population 18,000) has set a goal of becoming a carbon-neutral city. It has worked in partnership with the Thailand Greenhouse Gas Management Organisation to develop a greenhouse gas emissions inventory as well as to create a handbook on low-carbon city development that will be disseminated to other municipalities nationwide.

In contrast, the Bangkok Metropolitan Authority (BMA), with a carbon footprint about equal to London’s, has neither committed to reduce overall emissions nor acknowledges any responsibility for climate change. Instead, it has engaged in largely symbolic efforts including the 2007 “Use Compact Fluorescent Lamps” and “Stopping Engines While Parked” campaigns. None of these campaigns have significantly lowered the city’s overall emissions, nor has the BMA provided a clear rationale for people to reduce their emissions.

Although no effort to reduce greenhouse gas emissions globally can succeed without the cooperation of the largest producers — China, the US, the EU and India — it is hoped that Thailand will recognise its own responsibilities.

The country occupies a “boundary region” in global climate negotiations as both a growing producer of greenhouse gas emissions and as a nation highly vulnerable to the impact of global change. Prime Minster Prayut Chan-o-cha has stated his intent of “turning Thailand into a developed country by the year 2025”.

Thailand can therefore choose, along with the countries it seeks to emulate, to commit to the UNFCCC next year to curbing its emissions at levels consistent with preventing 2C of global warming. In particular, the government could exhort Bangkok (and other big cities) to follow the model of Klang, which would both improve the sustainability of Thailand’s development and demonstrate that it is an ethical global citizen. It would also provide a model for other rapidly developing economies in the region.

This would allow Thailand to follow the Philippines' lead and change its stance in upcoming UNFCCC negotiations. By demonstrating its own responsibility, it can, working with other countries, more effectively argue that major emitters must make more substantial commitments.

The NGO Germanwatch has calculated that Thailand is among the 10 countries most affected by climate change thus far. The sooner the Thai government adopts the vision of Klang’s Mayor Somchai, the lower the costs will be and the less vulnerable we all will be to the effects of climate change.

Danny Marks is a PhD candidate in Human Geography at the University of Sydney.