Standing by community, not with Charlie
Opinion

Standing by community, not with Charlie

The Paris march for unity on Sunday attracted more than a million people and world leaders including Germany’s Merkel, Britain’s Cameron, Turkey’s Davutoglu, Israel’s Netanyahu, and Palestine’s Abbas, among others. This extraordinary action by leaders and citizens is in response to perhaps the bloodiest week in the last half of a century in France with 17 dead. It began with the killing of 12 people at a previously little known satirical magazine Charlie Hebdo. French President Francois Hollande warned that the threats facing France are still serious even though the three perpetrators are dead. 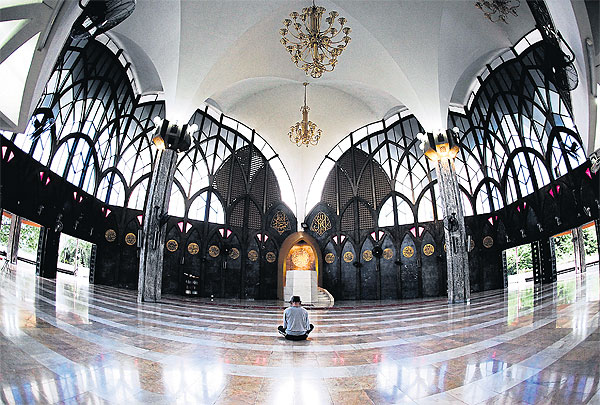 A Muslim man prays at the central mosque of Bangkok in Klong Ton. The freedom of speech debates following the Paris attacks reflect clashes between a belief in autonomy, versus a belief in divinity and community of faith. Pattarapong Chatpattarasill

The threat is real, however, not only because of information gathered by various intelligence agencies, but also because the violence and what has followed indicates a rift in the way Europe, and in fact the world, is moving in the context of fierce contests between different ethics/values people are willing to die for, and for some — to kill for.

This article is an attempt to argue that the motto "Je suis Charlie", while commendable in terms of solidarity with victims of senseless violence, transforms the killing into a politics of identity with potential for further deadly conflict in the present context if certain existing signs are properly understood.

Arguably in response to the killings in Paris, there are reports of Muslims becoming targets of more frequent attacks: women’s veils being pulled off, pork thrown at mosques in Le Blanc-Mesnil, four non-lethal hand grenades thrown at local mosques in Le Man, a shot fired at a mosque in southern France, graffiti saying "Death to the Arabs" sprayed on the wall of another mosque in Poitiers. I am not comparing these minor attacks with the killings in Paris but together they could be seen as a possible indicator of further deadly conflict.

Research on violence against sacred spaces (for example, temples, churches, mosques, synagogues, and so on) elsewhere in the world from Pakistan to Nigeria, including Thailand, suggests that when they are attacked people who revere them react with moral outrage, and at times with violence, because the sanctity of the space generates cultural power producing a collective identity.

One of the reasons why attacking these targets endowed with symbolic religious meaning can be extremely dangerous is because the place that is damaged by violence is not a physical body, but a communal self. This "self" reflects a sense of community with legitimacy for its existence lying in a specific boundary not unlike a country's territory. As a result, when sacred spaces are attacked or threatened, anger among members of faith communities — and at times extreme responses — can be expected.

Recently I did an internet search for a picture of the Prophet Mohammad and the Kaaba’a building inside the Al-Masjid al-Haram mosque in Mecca. I wanted to know how Mohammad solved the conflict among the Meccans in the 7th century using creative non-violent actions and I planned on using the research for my lecture at Thammasat University last Wednesday. But then I came across a horrible image of a pornographic photo pasted on the black curtain covering the cubic Kaaba’a.

At first I was shocked at such an abomination because for me as a Muslim, the Kaaba’a is the centre of the Hajj where pilgrims walk around the structure as a part of the holy Islamic ritual, one of the five pillars of Islam.

Once the shock and anger subsided, I began to think of others in my family and community, and of what would they think if they saw such a picture? They might become angry and curse those who did such a thing to their revered religious object at their holy site. I could not think of anyone who would contemplate using any violence against "those people" and will leave their destinies in God’s hands.

My dear departed mother, however, would have gone further and perhaps raised a question: what has happened to the world where some people would print something so offensive to others, and those offended took guns and killed them as well as those who have worked with them?

The question is important because it is not about who would do such a thing. Instead it is about what conditions lead some people to do such things?

It is not only about the issue of freedom of expression versus its denial. I would say that the world has turned into a space of contestation between two differing sets of ethics: the ethics of autonomy — people are primarily autonomous individuals with wants, and needs — versus the ethics of divinity/community, where people are temporary vessels with souls who attain meaning as members of larger entities such as families or communities of faith.

Let me illustrate the differences. In 1475, Hans Memling painted The Allegory of Chastity which depicted the Virgin Mary on top of an amethyst rock formation above a stream reflecting her purity and guarded by two lions. Five hundred years later in New York City at an art exhibition, the painting The Holy Virgin Mary by Chris Ofili depicted Mary as a black woman surrounded by images of vulvas cut from pornographic magazines and smeared with elephant dung.

While Memling’s painting indicates that chastity is a virtue that one should treasure and protect, Ofili’s world is one where desecrating the sacred is possible, and even commendable for some. Following the ethics of autonomy, the painting flows with a new understanding of the human body best captured by the widely available sticker: "Your body may be a temple, but mine’s an amusement park."

As modern societies move faster towards widespread loneliness with virtual connectivity replacing genuine human contact, the need for belonging increases, especially among those who are disenfranchised, such as immigrants. Some search and find their meanings in acting against people offending the sacred identities they have come to revere.

If I am right, this contestation between different ethics will continue and might engender further violence. In the present context, the English writer Evelyn Beatrice Hall’s statement: "I disapprove of what you say, but I will defend to the death your right to say it", often attributed to Voltaire, appears everywhere in defence of freedom. Though truly inspiring, I don’t think I could accept Hall/Voltaire’s statement without reservation.

That is not because Voltaire wrote the tragedy Le Fanatisme ou Mahomet describing the Prophet Mohammad as an imposter, but because I can think of a number of cases where I will definitely not defend anyone’s right to say it. What people say in support of slavery, paedophilia, genocide and racism are not mere words of conviction. In fact, their words often serve to legitimise such practices and therefore should not be defended.

In addition, from the perspective of the ethics of divinity/community, I do not want to live in a world where there is no sacredness left. Among things I find sacred are human lives and the things we hold dear: holy books, prophets, objects, among others. As a result, I cannot identify myself with Charlie Hebdo because I believe that one can still be critical, satirical and especially funny with civility.

For those opposing cultural objects they find offensive, protesters coming from the ethics of divinity/community need to understand that by killing, they have turned their opponents — producers, directors, writers and editors — into heroes and the objects they found offensive turn into powerful cultural symbols. A meaningful act of protest in a context endowed with the ethics of autonomy requires an understanding of cultural economy that will lead to various efficient non-lethal methods such as economic boycotts.

This is in fact in line with Islamic teachings. Although Muslims are taught to fight for the cause of Allah against those who offend them, they are also told that "if anyone kills a person not in retaliation of murder, or to spread mischief in the land — it would be as if he killed all of mankind". (Koran 5: 32)

Some might argue that Charlie Hebdo is spreading mischief in the land and therefore people working there deserve to be killed. But the Koran teaches otherwise. For God also says that "And if anyone saved a life, it would be as if he saved the life of the whole people." (Koran 5: 32)

That one life is equal to the whole of humanity is possible because sanctity in life still exists and needs to be respected.