The Asean+1 region (Asean plus Greater China) boasts a population of around 2 billion and accounts for around one-quarter of the global economy. Analysis by AEC Advisory based on the recent "Doing Business 2015" report by the World Bank also underlines the region's attractiveness. However, we also must be aware of the two-dimensional reality of the region and its "forerunner" and "frontier" markets. 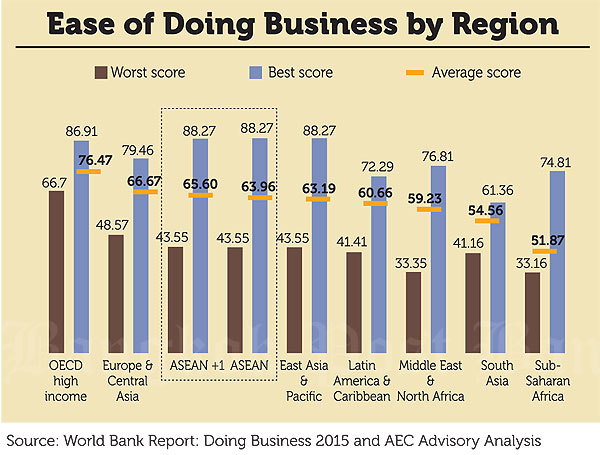 The 10-member Asean region boasts a population of more than 600 million and is strategically positioned to access and integrate with the Greater China market (China, Hong Kong, Macau and Taiwan) of 1.37 billion citizens, through regional economic corridors and preferential trade agreements.

Greater China today is playing a rising role in Asean commerce and investment, through the China-Asean Free Trade-Agreement, helped by improving transport infrastructure. Many Asean countries enjoy the added advantage of low tariffs under the Generalised System of Preferences (GSP) from the United States and the European Union. This can benefit investors — including those from China — that set up manufacturing and/or export operations in the region.

In "Doing Business 2015: Going Beyond Efficiency", World Bank researchers evaluate 189 economies across 10 areas of business regulations from starting a business to cleaning up insolvency. The report shows Singapore topping the global list for the ninth year, with Hong Kong third, Malaysia climbing to 18th and Thailand improving to 26th.

It is at this point that deeper analysis confirms the existence of two distinct groups: Forerunners and Frontiers. In the Forerunner group we place Singapore, Hong Kong, Malaysia and Thailand, which are relatively more developed and mature as investment destinations. This leaves the Frontier markets of Vietnam, China, the Philippines, Brunei, Indonesia, Cambodia, Laos and Myanmar, which collectively remain somewhat more complex for foreign investors to navigate.

This fact by no means detracts from the long-term attractiveness of the latter group, nor does it mean its members are not improving in leaps and bounds.

China improved from 93rd to 90th, driven by enhancements in its electronic filing and payment systems, and in also making business incorporation less expensive. Laos climbed from 155th to 148th with a remarkable improvement in two areas: getting credit (through a modern, unified and notice-based collateral registry), and minority investor protection. The latter was strengthened by requirements for directors to disclose conflicts of interest and for companies to disclose related-party transactions to the Securities Commission and in annual reports.

Indonesia has risen three spots by streamlining the approval process for business incorporation, reducing labour taxes, and making it easier to obtain electricity by eliminating the need for multiple certificates. This is particularly relevant for manufacturers and renewable energy small power producers who recently have shown increasing interest in the most populous country in Asean.

On the flip side, Myanmar and Vietnam dropped in the rankings, though we still see some underlying improvements. In Myanmar for example, the report acknowledges that it made the biggest improvement in the ease of trading across borders. For Vietnam, despite a six-place drop to 78th, the country improved access to credit by establishing a new credit bureau, reduced the corporate income tax rate and improved ease of tax payments.

Comparing regions around the world, Asean and Asean+1 as a whole score very competitively for business-friendly regulations. As the graphic shows, while OECD high-income countries score the highest on average, both Asean and Asean+1 actually share the highest scores and overall rank third after Europe, clearly leading other developing regions such as Latin America, the Middle East and South Asia.

Underscoring the attractiveness of Asean+1 will be the realisation of the Asean Economic Community (AEC) in 2015. In fact, an analysis of foreign direct investment (FDI) over the past five years already shows a structural shift resulting from a flood of early investors into the region.

Looking at the five-year trend, Asean+1 consistently receives more FDI relative to GDP than any other developing region (with Asean itself on par with Latin America) and is on an ever-increasing trend versus other notable markets such as South Asia and the Middle East. The relaxation of foreign ownership restrictions in ICT, tourism, healthcare, air transport, logistics and others under the AEC will further strengthen the region's attractiveness.

Importantly, in recent years FDI figures in Asean and Asean+1 have tracked each other in harmony, which in our view provides further rationale for an Asean+1 investment strategy, and validates it as a risk management tool both for China-focused and Asean-focused investors alike.

In summary, recent indicators continue to support the virtues of Asean and the importance of developing an Asean+1 strategy for investors seeking value creation and risk management opportunities in emerging markets. The Asean+1 region is, on balance, the most attractive today for investors in our view, and there is little doubt that there has never been a better time for investors to do business in Asean+1.

Dominic Arena is the managing director of AEC Advisory Pte Ltd (www.aec-advisory.com), a regional corporate advisory firm with offices in Bangkok, Singapore and Hong Kong serving private and public sector clients and institutional investors in strategy, market entry, M&A, turnaround and regulatory policy. He can be contacted at dominic@aec-advisory.com