A 'third-way' compromise is imperative
Opinion

A 'third-way' compromise is imperative

As Thailand is gripped yet again by a political climax surrounding former prime minister Yingluck Shinwatra's impeachment trial for dereliction of duty over her ousted government's rice-pledging scheme, it is instructive to take a long view beyond the drama of the day. 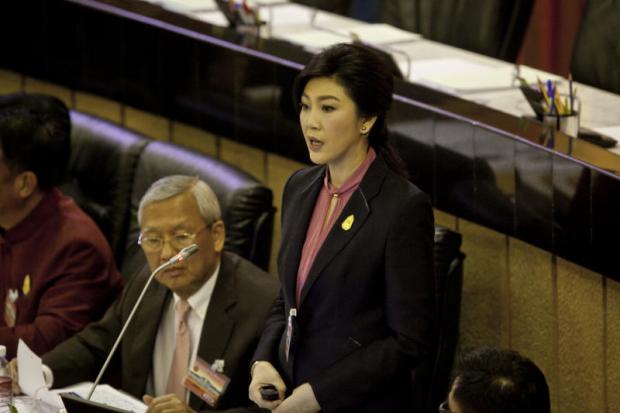 Former premier Yingluck Shinawatra defends her role in the loss-ridden rice pledging scheme to the National Legislative Assembly which will decide her fate today. If she is impeached, the backlash from the Thaksin side will be as unpleasant and undesirable as has been seen in the recent past. Krit Promsaka na Sakolnakorn

The Yingluck case is reminiscent of the trial of her brother, Thaksin Shinawatra, in 2001 that went in the opposite direction, paving the way for Thailand's protracted crisis.

In view of the grinding back-and-forth battle between Thaksin's forces and his opponents, Thailand is going around in circles in a holding pattern with marginal forward movements during its transition of a lifetime, the shape and outcome of which is being fiercely contested.

In the momentous hours leading up to Thaksin's assets concealment verdict, the 15-member Constitutional Court on 3 Aug 2001 — Thailand's prominent forces and powers-that-be — were lined up in a different direction. Thaksin had concealed his assets by placing billions of baht under the names of his driver and maids. He feigned ignorance, arguing that his wife was in charge of the family's fortune. Of course, just about everyone knew that he had to know the extent of his wealth.

The pressure on the judges was immense. By midday, one could almost hear a pin drop in Thailand's political space. Thousands of pro-Thaksin demonstrators took position in front of the court, far outnumbering the pro-rule of law minority. It felt like a massive pro-Thaksin upheaval was in store should the court decide against him. For his part, Thaksin famously questioned how 15 judges can decide against him when 19 million Thais voted for him and his party in the January 2001 poll.

In an 8-to-7 verdict that went in Thaksin's favour, four majority opinions insisted they had no jurisdiction over the case while the other four said Thaksin honestly did not know how his assets were handled. The minority judges later faced harassment and opprobrium from the Thaksin side.

He went on to rule with an authoritarian streak accompanied by an electoral mandate. His popularity peaked with his landslide re-election victory in February 2005, completing a full term and ruling an unprecedented one-party government. It was a key turning point because the re-election mandate swelled his ego and hubris took over.

The ongoing tussle between Thaksin and his powerful opponents began in the first half of 2005 and has lasted to this day. He stopped being deferential, and they stopped giving him a chance. Thaksin was seen as a threat by the powers-that-be, and he did not care. In its essence, Thailand's conflict is largely rooted in the conflicting egos of the elitist few. From the earlier days when he could do no wrong, all things Thaksin did soon turned out wrongful.

The logic of this battle is now manifested in the Yingluck impeachment case being decided by the coup-appointed National Legislative Assembly (NLA). The machinations are all there. To be sure, the rice-pledging losses represent Thaksin's colossal miscalculation that transpired under Ms Yingluck's watch. So the charges against her have validity. But if the same yardstick is applied to previous and future administrations and prime ministers, it is likely that most of them would not pass the test.

Calling a spade a spade means having to call this case a power play, not a rule-of-law manoeuvre, just like when Thaksin was acquitted, even though he lied in his assets statement or when his elected proxy prime minister Samak Sundaravej was disqualified in 2008 for hosting a cooking show.

The fundamental considerations in this case stem from Ms Yingluck's electoral viability and the coup-makers' reason for being. If Ms Yingluck is left untouched, she could stand in the next election, enabling her brother to win again. If she has done no wrong, the coup-making rationale for seizing power would ring hollow. Given that the military junta appointed each and every member of the NLA, it is difficult to argue for the complete autonomy and independence of this adjudicating body.

In the event of her five-year ban from politics if she is impeached, the pro-Yingluck electorate that has voted for Thaksin's parties time and again would see it as gross injustice. But the short-term effects are unlikely to be cataclysmic because the military is firmly consolidated under the current high command, with martial law as an instrument to deal with public demonstrations.

But the medium- and longer-term impact of going after Ms Yingluck will accumulate grievances likely to be more virulent when they eventually come to the fore.

The Yingluck impeachment hearings are part of a larger and ongoing build-up that is part and parcel of Thailand's grand transition and contested political order that is best resolved through compromise and mutual accommodation.

Impeaching Ms Yingluck would push compromise further away, not bring it closer. But if she is somehow let off the hook, her political standing and proven electoral appeal would complicate the post-coup election outcome. There is no easy way out once a structural conflict of this magnitude is allowed to entrench.

The parallel criminal prosecution against Ms Yingluck is the main indicator of how the coup-makers want to call the shots. If they not only see to it that her impeachment is allowed to go ahead but also press on with criminal proceedings, then the gloves are off and the backlash from the Thaksin side will be as unpleasant and undesirable as has been seen in the recent past.

Part of the difficulty in defending Thailand's democratic process and principles, or simply calling for fair play in a fair setup of who gets to rule the country based on the people's aspirations, is that it favours the Thaksin side with the attendant risks of being smeared and attacked by his opponents. This is largely because his electoral rivals have been inept and his unelected opponents have been accustomed to taking matters into their own hands.

As Ms Yingluck's fate is decided, it behoves everyone in Thailand to realise that the future must be a third way based on the collective will of Thais and a balanced political system of electoral representation and systemic restraint. It should not be of insufficient representation and excessive restraint.