Putting humanity back into Thai education

One of the most excruciating experiences of being a parent in Thailand is looking for the right school for your children, starting as early as pre-school age. 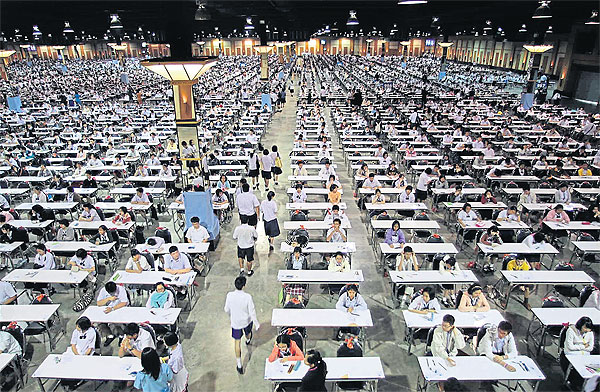 Students must pass rigorous admission exams based on rote learning to get a place in the secondary schools they desire, putting them under immense stress. CHANAT KATANYU

Internet forums like the popular Pantip.com are crammed full of posts from anxious parents relating the trials and tribulations of making such choices. For many parents, the experience is most grueling when their children are ready for kindergarten because they believe it will lay down the foundations for their entire lives.

And who's to say their anxiety is unreasonable when the Thai education system can be described as, for lack of a better term, one huge mess?

But it's a necessary mess that parents must deal with. And to be on the safe side, they try to get their children into the best school they can find, whatever it takes, to ensure their children the bright futures they deserve.

Once in kindergarten, many of the youngsters will find that their carefree days, for all practical purposes, are over. It's now study, study and study some more.

Many parents — quite possibly the majority of them — put their children in tuition schools just so they don't fall behind their classmates and also to improve their chances of successful entrance into the first grade. Imagine that — children must face the horror of preparing for an entrance exam at the tender age of six!

By this time, the parents themselves are nervous wrecks, and usually it's the mothers who suffer the most.

One of the horror stories circulating on the internet last year was the heart-wrenching tale of a kindergarten child whose upper-middle class parents put him through an educational hell.

After the boy's regular school day was done, he was sent off to a tuition school. Following dinner he had to study. The next day, he would have to get up at 5.30am for regular school.

On Saturdays and Sundays he had more classes at tuition school, with a swimming lesson thrown in. There was practically no play time for the child. The only TV programmes he was allowed to watch were educational and infotainment shows, no cartoons or other "nonsense".

One evening the child went out riding his bicycle alone, as he had made no friends in his housing estate due to his tightly controlled schedule. When his parents called for him to come back in for dinner and study, he ignored them. Finally, the father forcibly took him in and threatened to destroy his bike for being "so naughty".

Eventually, the boy passed the entrance exam for first grade. But life remained as study-intensive as before. Many tearful pleas from the boy for play time fell on deaf ears. To cut a long story short, one day the boy suffered a severe nervous breakdown and withdrew into himself so completely no one was able to draw him out.

I chanced upon this story after reading a recent report that the National Reform Council and the Education Ministry have agreed that kindergarten should be included in compulsory education, thus extending it from nine to 11 years.

I honestly don't know what to make of the announcement but it seems to me the initiative, if it comes to pass, does not address the problem where it matters.

The problem, as many experts and commentators have pointed out, is too much emphasis on rote learning and obedience to authorities, which causes a lack of creative thinking among students. Many schools also fail to provide quality education and lack qualified teaching staff.

But the most serious flaw of our education system, as far as I'm concerned, is the philosophy behind its policy — a policy that aims to produce human resources to fulfill the needs of the economic sector rather than nurturing ethically and socially responsible citizens for future society.

So what we have are educational institutions that operate like factories, turning out products to satisfy the market; or military academies producing obedient troops, instead of being places of learning and enlightenment.

Education Minister Adm Narong Pipatanasai was quoted as saying: "Basic education is essential to equip students with knowledge to further their studies at higher levels. The sooner they are taught, the faster they can remember and learn."

But why should they have to "remember and learn" at such a young age? Shouldn't they be allowed to play, get dirty and even get hurt sometimes as children should and in the process learn the art of living with other human beings in society at large?

Why should they be pressured into turning out economic warriors rather than common, decent citizens?

This is not to say that the goal of running an economy effectively is not important. Everybody knows it is. It is a matter of survival, after all. But that should not be the primary objective of an education system.

I believe that if an education system provides nurturing and intellectually stimulating learning experiences, the economy will be taken care of in due course.

I believe the ethically and socially responsible citizens who will emerge from such a system will know what has to be done to keep the economy strong. There will be competent − and likely honest − people who will be able to run businesses and government.

So let's fix the system where it is broken. The problem, I fear, is that we are too stuck in our current malaise and inertia to move in a different direction.