Thai Buddhism is in crisis. Public faith is constantly eroded by wayward monks, their blatant abuse of the saffron robes, widespread laxity in monks' discipline, fierce competition for monastic ranks, and distortions of Buddhist teachings. 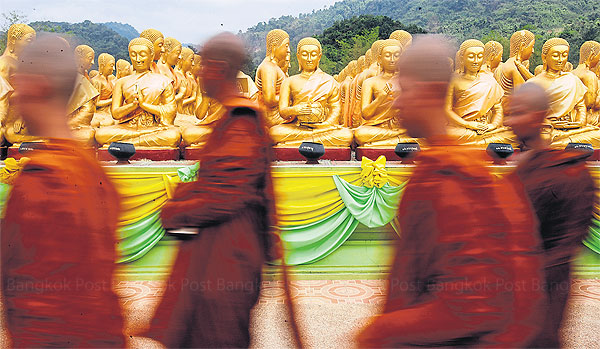 Novice monks walk in a procession around Buddha statues representing the enlightened disciples of the Buddha in Nakhon Nayok. Widespread laxity in monks' monastic discipline has prompted public calls for Sangha reform. (Photo by  Pattarapong Chatpattarasill)

Phra Paisal Visalo, abbot of Sukhato Forest Monastery in Chaiyaphum's Kaeng Kroh district, is author of Thai Buddhism in the Future: Trends and Ways Out of the Crisis. To overcome the crisis, he believes we need to understand the complexity surrounding Thai Buddhism. Short of urgent reform, he fears we might see the collapse of Thai Buddhism within the current generations.

What are the most worrying problems in Thai Buddhism?

Firstly, the poor quality of monks which is worsening. Monks have little knowledge about dhamma and stray widely from the monastic codes of conduct. Apart from eroding public faith, they create cult-like groups and engage in supernaturalism and commercialisation of Buddhism. They make people misunderstand the Buddhist teachings which damages Buddhism as a whole. People come to see Buddhism as a system full of rites, nonsensical beliefs and wayward monks.

Secondly, Buddhists' poor conduct. Corruption, drugs and other immoral matters will occur less if Buddhists practise Buddhism. A weak Buddhist system then cannot counter consumerism and materialism, which are the root causes of so many social malaises today.

Thirdly, indifference between monks and lay society. People have lost respect for monks, and their interests. They no longer care if monks misbehave, which deepens the crisis in the clergy. Monks have also drifted away from ordinary people. They allow themselves to be governed by the state and money barons, thus becoming irrelevant to society.

In your book, you specify four problems of the clergy's organisation. Please elaborate.

First, the inefficient centralised system. The Sangha administration is centralised among only a group of 20 elders. The Supreme Sangha Council members only convene for meetings. Then they return to their temples, not taking back any responsibilities with them. 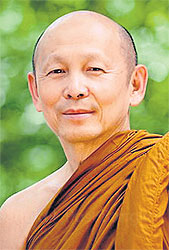 Think about a cabinet. After a cabinet meeting, each cabinet minister still has duties at their respective ministries. The Supreme Sangha Council only issues orders and resolutions. They don't have any duty or authority to implement their orders.

In addition, there are no mechanisms to monitor the clergy. No matter how the elders err, they remain in the Supreme Sangha Council for life. Their terms end only when they die, quit the monkhood, or are removed by royal order.

Different levels of the clergy are under similar centralisation. At the provincial level, monks are under one provincial monk chief's sole authority. The same with district and sub-district levels. That's why the system is inefficient, open to nepotism, bribery and corruption.

Sangha reform is only real when there is more decentralisation. Instead of the old top-down, centralised system, there should be separation between the executive, legislative and judicial branches.

It is also important to have open channels for monks at lower levels to provide input on Sangha policies. The administration should also be decentralised down to the provincial, district and tambon levels to allow local monks more flexibility to respond to local needs.

Secondly, the clergy is too close to the state and follows every state policy obediently. The clergy drifts away from society and becomes indifferent to social problems and people's suffering.

Before, monks' ranks were mostly given by local communities. That changed during the reign of King Chulalongkorn when monastic ranks came only from royal appointment.

The third problem stems from the clergy's distant relationship with society. In the past, monks and lay people were very close. They donated land to the temples and temples rented out land cheaply to the poor. Nowadays, people have lost much faith and interest in monks' affairs. They feel temples belong to the rich.

The fourth problem is monks' recruitment and training system. Before, it was a semi-screening system because everyone knew everyone else in the villages. The preceptors had the duty of training monks under their supervision.

Nowadays, there is only one preceptor in each tambon. Each preceptor has hundreds of monks under their supervision. They don't have time to train. Also, abbots often lack knowledge and have no interest in training new monks. Without training, monks live a comfortable life without much to do apart from making money. It's why the quality of monks is in constant decline.

Lastly, monks' education. Their formal education focuses on memorisation, lacking both motivation and purpose. Monks do not want to study because it has no use in real life. During exams, they cheat even more than lay people, which reflects the clergy's total failure in monks' education. Without intellectual and spiritual training, monks are weak and routinely violate monastic disciplines.

Modern society has great diversity in all aspects. Buddhism needs to adjust to diverse needs, resulting in new sects. Is lack of unity a problem?

We must accept that the clergy can no longer be unified. It must respect  diversity. But amid diversity, there should share common principles − the Dhamma Vinaya, the monastic disciplines.

The problem now is diversity amid anarchy; there are no shared principles. It's not a problem if they operate as different sects. They have religious freedom to do so according to the constitution. But if they insist they belong to Theravada Buddhism, they must respect the discipline. Now they do not, which creates problems.

What about the Dhammakaya Temple?

Another unacceptable practice is the methods of soliciting donations which are close to fraud. The teaching that the more money you donate, the more merit you receive, or you need to close your worldly bank account to open your account in heaven, the selling of amulets called the "money sucking" model, etc — all this is not Buddhist teaching. Wealth is not the goal of Buddhism.

The Dhammakaya problem has persisted for decades. What should be done?

Make things right. If past misconducts required defrockment, no matter how long a period has passed, what is wrong is wrong. If you are no longer a monk, whatever you do under claimed monkhood should be revoked. Many people say why revive the Dhammakaya issue to stir divisions. My view is that if we do not tackle the problem correctly and justly, the problem may calm down only temporarily. New problems will flare up again.

For example, the Dhammachayo court case ended suspiciously in 1999. Sixteen years later, it became a big issue again. On the dhamma front, the Supreme Sangha Council's resolution countered the late Supreme Patriarch's ruling and the monastic codes of conduct. On the legal front, the attorney-general abruptly withdrew the lawsuit although the court case was near its ending. It is only normal that there have been calls to revive the case. If we want to close this case, it must end with what is right and transparent.

Does Sangha reform have a chance under a military regime?

For example, if the government sponsors a new Sangha bill to abolish the Sangha Council, reduces its role to being only an advisory board, and replaces it with a more vigorous executive body, I still don't think those measures will succeed.

We can expect to see mass protests by monks against such a bill. Back in 2002, the Dhammakaya scandal also prompted a draft bill to reform the clergy. Under that draft bill, the Sangha Council became an advisory board with a new executive body called Maha Kanissorn. It got cabinet approval but it did not make it to parliament because of mass protests by monks. It was finally shelved.

Likewise, any attempts from the government or even the National Council for Peace and Order will face difficulties becoming law. Even if it does, such a law will be impotent.

I don't believe in reform from power at the top. The only legitimate authority to deal with the problem is the law. Using the law to punish rogue monks across the country can be done immediately. Improving monks' education and training is also urgent and doesn't face much opposition. But people in charge of reforming monks' education must be well versed in the history of the clergy and monks' education system. Sangha reform must also involve public participation and must be based on knowledge, insight and consensus. A new body should be formed to collect input from all sectors to reach a shared conclusion.

It is a mission which must be accomplished. If not, we will soon witness the collapse of Buddhism in our country. Religion will end up working as mere rites and rituals without essence. If you cannot reform the clergy, don't ever think of reforming the country. There are only some 200,000 monks. But there are nearly 70 million people in Thailand.

If you believe it is mission impossible, there's no need to think of reforming the country because the challenge is simply much greater.

Intarachai Panichakul is a reporter with Post Today. The interview in Thai was first published in Post Today on Feb 26, 2015.

The Public Health Ministry has set up an emergency operations centre to monitor the spread of the monkeypox virus, which has caused over 100 confirmed cases in at least 12 countries to date.