Exploding a bomb in a prime tourist location is a matter of serious concern. Late on Friday night, a home-made device hidden in a stolen pickup truck was placed in the parking garage of Central Festival on Koh Samui, a major shopping mall. The blast wounded six Thai bystanders and an Italian girl, just 12 years old. Within 12 hours, security forces claimed they knew who was responsible. So the obvious question is, what are they doing about it?

The inability of the combined weight of the military, the paramilitary, the police and the power of Section 44 to stop violence is disheartening. Prime Minister Prayut Chan-o-cha abandoned martial law two weeks ago in order to invoke the much more focused powers of Section 44. One does not expect miracles. But the last explosion under martial law was a hand grenade in an empty, private parking lot. The first serious incident under Section 44 rule is a car bomb in a public shopping area. That is a serious escalation of the threat to public safety.

Speculation is running wild in the media and among the public. Because the pickup truck involved was stolen in Yala province, questions surround the involvement by separatist gangs from the deep South, who have never taken their violence outside the region. And as the blast occurred on the eve of April 11, it's possible the explosion was tied to the fifth anniversary of the battles at Khok Wua intersection.

The blast was in Surat Thani, sparking rumours that it involved ex-Democrat and Bangkok Shutdown leader Suthep Thaugsuban, who owns a piece of the shopping centre. That fired up questions about elements who do not like Mr Suthep, now known as Phra Suthep.

Scarcely half a day after the blast, security authorities in Bangkok speculated — forthrightly — that the blast was the work of "the same group behind recent blasts in Bangkok". That was quite an admission, even though it appears to be only an educated guess. After the two Bangkok blasts, authorities rounded up at least two groups and several individuals. They announced they had arrested all of the suspects who are still in Thailand. They said they had put out notices to border authorities and foreign colleagues of the alleged involvement of Thai suspects living abroad. 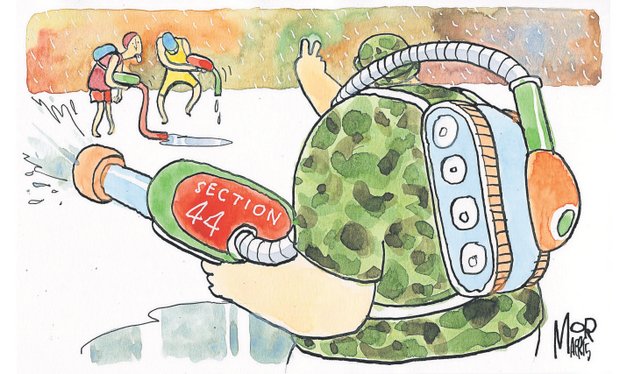 But just 33 days after the second Bangkok explosion, and three weeks after handing over arrested suspects to military courts and police, another bomb has exploded. It was bigger and far more dangerous than the previous two incidents in Bangkok, at the parking lot and at a BTS entrance near Siam Paragon shopping mall.

By claiming that Friday's bomb was the work of the "same group", authorities are admitting that all of their arrests failed to get at the core of the opposition they claim to face. But the problem is deeper than that. All three incidents took place at times and places that might indicate the bombers are after publicity rather than blood. But at least nine people have in fact been wounded. These attacks cannot be taken lightly. They also cannot be whitewashed by high-profile mass arrests.

The Samui explosion again exposes the fatal flaw of suppressive rule. Martial law was supposedly needed to crack down on and prevent violence, yet two explosions still took place in Bangkok. Now martial law has been replaced with the even more draconian one-man rule of Section 44. The government justifies it by pointing to "elements" still intent on creating trouble. Section 44 has failed its first and main purpose — to prevent violence and protect the people.