My cousin died at sea, trying to flee Syria's horrors

Last winter my cousin died on a migrant ship in the Mediterranean Sea. Amjad was a 26-year-old engineering graduate. My family was ethnically cleansed from Palestine in 1948, after which they settled in Damascus. Since 2011 they have been embroiled in a war not of their making. Food, water, heating, security and hope are becoming luxuries, scarcer by the day. 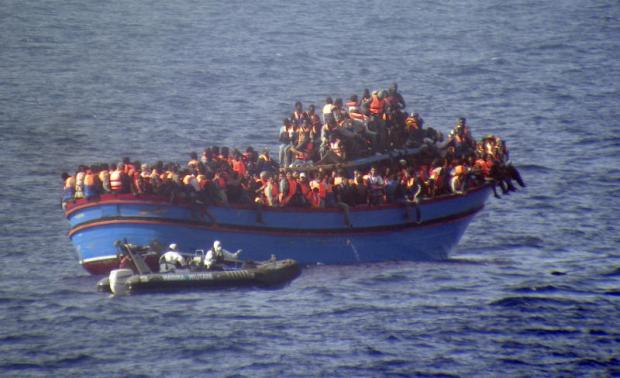 A motor boat from the Italian frigate 'Grecale' approaches a boat overcrowded with migrants in the Mediterranean Sea last year. AP/Italian Navy

In October, Amjad went from Syria to Turkey, then paid over $1,000 (32,000 baht) to embark on a small boat to Greece, all with the hope of settling in Europe. While the details remain hazy, it's believed that the boat was turned back from the Greek coast. It capsized on the return journey and everyone drowned.

Meanwhile, I can buy mangoes and coconuts in December, I attend a top university, and my idea of a problem is when Orange is the New Black won't load on Netflix. My cousin and I are no different — we have the same genetic make-up, speak the same language and follow the same religion. And yet my British passport gives me both immunity and freedom, whereas he perished fleeing a bloodthirsty civil war.

Borders do not and should not mean anything: it is simply by chance that I am here and they are there. Where is the justice in that?

These migrants, dying in their hundreds aboard death-trap boats, are some of the most vulnerable people in the world. Yet our media and politicians talk about them like they are dirty, unwanted, or — worse yet — invisible. Newspapers give columns to people like Katie Hopkins, and publish their Neo-Nazi bile. We devote so much less of our time to questioning who these people are, why they would embark on such deadly journeys, and what can be done to alleviate their suffering. And we continuously fail to ask the most important question: why is nothing being done to help them?

Instead, our politicians — even those on the supposed "Left" — talk about migration in terms of economic gain. Our media has turned "asylum seeker" into a euphemism for "benefit thief". Far-right groups are on the rise across Europe, and anti-Semitism, Islamophobia and other racially motivated hate crimes are on the rise.

Our apathy towards those dying in the Mediterranean epitomises this growing intolerance. We are moving inextricably towards a point where we worship borders and security over human life, and where black and brown bodies will perpetually be dismissed as the "Other".

We have the audacity to use phrases like "human rights" while vulnerable people are being left to die on our doorsteps, and those seeking asylum are being indefinitely held in uninhabitable detention centres.

The fact that the UK government will not contribute to or partake in the rescue missions of these boats is despicable. We have a duty to help, not only because of our historical and ongoing role in these war-torn and poverty-stricken countries. But in the 21st century, people should not be dying in ramshackle boats, or crossing continents in search of a better life.

Over 1,500 migrants have died at sea in the last four months. Their crime? Aspiring for stability in Fortress Europe. We have no right to belittle or ignore their plight, let alone play God and decide whether they live or die. How many more nameless, faceless migrants must drown in our waters before Europe takes responsibility?

Today the UN has said that at least 800 migrants died as a result of the latest tragedy. For my family, Amjad's death caused so much pain. And when I think of what has just happened, and how that same grief has been needlessly repeated, and multiplied by at least 800, it's just too much to bear.