A well-intentioned but problematic charter
Opinion

A well-intentioned but problematic charter

Thailand's draft constitution of 2015 appears to be full of good intentions that may end up in futility. 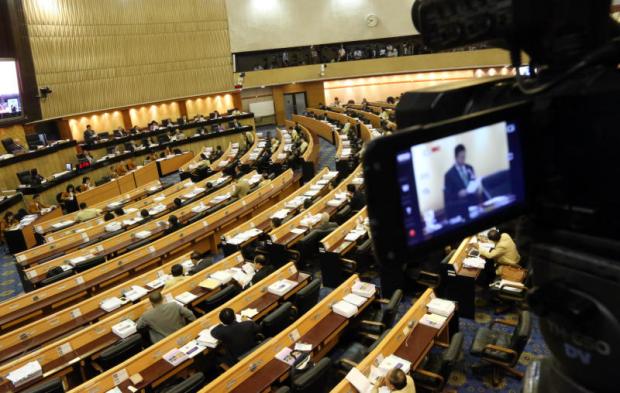 The National Reform Council is now meeting to discuss the draft charter until Sunday. (Photo by Kitja Apichonrojarek)

Its overarching design is to codify a "good society" and "clean politics" in Thailand by stipulating minute provisions for good governance and enforce morality and ethics into politics in a nitpicking fashion. These lofty and noble objectives are certainly beneficial to Thailand but the constitution is perhaps not the best place to operationalise and make them happen through articulation in such fine detail.

The most effective and lasting charter should be for and about the Thai people as they are, not as the chosen 36-member Constitution Drafting Committee (CDC) would like them to be. It should be broad and rooted in a collective spirit based on popular rule under its particular time and circumstance. It needs to espouse the main principles of government, institutions and mechanisms of governance, relations between and roles of governing institutions and the residual and inviolable liberties and rights of the governed in the face of government.

The current draft reads less like basic constitutional principles and more like a code of moral conduct, backed by ethical procedures, for Thai citizens and their representatives. Unlike the consensus-based and undisputed "people's charter" of 1997, the current draft comes across as the drafters' charter which reflects their prerogatives and those of the overlapping power networks that have been ascendant since the coup in May last year. It is well-intentioned but problematic.

At 50,000 words, 194 pages and 315 articles, it is also the longest in Thailand's 83 years of constitutionalism thus far. Its top-down stipulations provide all sorts of checks on elected representation in favour of non-elected sources of power, resulting in little balance.

Until the past decade, Thailand's constitutional trials and tribulations followed a linear trajectory with periodic ups and downs. During the military dominated era from the late 1940s to the 1980s, charters featured an appointed senate as a counterweight to the elected lower house, while military strongmen took turns at the helm. As economic development and political modernisation made sustained headway in the same period — and Cold War exigencies that reinforced military prerogatives faded — Thailand's constitution-crafting pattern shifted after 1991-92, when a disguised military dictatorship that took power after a bogus poll was overthrown by a vibrant civil society, led by Bangkok's middle class.

The newly awakened electorate at the time demanded a "full" democracy, led by an elected civilian and a way out of the "money politics" that trapped Thailand in the vicious cycle of recurrent coups and constitutions with corrupt elected governments in between. The result was the reform-driven, inclusive and popular 1997 charter. It mandated a fully elected senate, a prime minister who had to be an elected member of parliament and a clutch of accountability-promoting independent bodies, such as the election and anti-graft agencies. These checks for transparency and accountability were balanced out by a stable and effective administration, spearheaded by a stronger executive branch.

The 1997 charter worked as intended until its collision with the political party machine, vast wealth and personal networks of Thaksin Shinawatra, who won all of Thailand's polls in the 21st century either directly or by proxy. In his heyday a decade ago, Thaksin shrewdly deployed vested interests and loyalists to penetrate and capture the inner workings of the 1997 constitution. After its demise by way of the September 2006 coup that effectively sent Thaksin into exile, Thailand's constitutional pendulum swung the other way against the very reforms so sought after in the mid-1990s.

When a new constitution came into place in 2007 after the coup in the preceding year, the upper chamber became half-appointed and half-elected. The executive branch was weakened. More checks and accountability channels were imposed. The judiciary gained more authority at the expense of elected representatives. It became easier for courts to dissolve political parties and ban politicians. Yet all that was not enough to put down the Thaksin challenge as his proxy parties kept winning at the polls, partly because the opposition Democrat Party was unable to mount a serious challenge. The Thaksin party machine's landslide victory in July 2011, led by Pheu Thai under his sister Yingluck Shinawatra, set the stage for the coup last year.

The draft constitution of 2015 indicates the pendulum is now swinging even farther back in time. In this round, only 77 of 200 senators are to be derived from elections, one for each province. The remainder will be drawn from occupational fields, dominated by active and retired civilian bureaucrats and military personnel. Even for the 77, their elections will be indirect, as unspecified committees in each province come up with a list of 10 qualified candidates for voters to choose from.

Not seen since 1991-92, the premier no longer needs to be an elected representative. In Section 172, the lower house can choose an extra-parliamentary political player as PM with a two-thirds majority, as opposed to an MP candidate who would require a simple majority. This sounds rigorous for an outsider to become prime minister but Section 173 then says that if these numbers are not met, the candidate with the highest lower house support would carry the day. In effect, a non-MP with lower than two-thirds majority support can still be PM as long as he or she beats out MP candidates who cannot acquire a simple majority.

In a novel twist contained in Section 7, in extenuating circumstances that lead to political paralysis, such as the case of Ms Yingluck's final months in view of street rallies and the impotency of her administration, the Constitutional Court will be the final arbiter of issues and claims made by other relevant state agencies. In addition to the bureaucracy, the judiciary is also given more authority.

The spirit of the current draft charter is premised on the very understandable notion that elected politicians are the drivers and architects of a corrupt electoral system. As a remedy, the democratic institutions inherent in the electoral system must therefore be de-fanged and placed under closer scrutiny. Not only state agencies and the courts are to perform the accountability-enforcing functions, but individual Thais will also have more leeway to take public officials to task for graft by collecting signatures for impeachment motions.

Moreover, a host of councils to ensure "good" leaders are to be set up. How so and who will select these council members remain undetermined. In another unprecedented development, the coup-spawned National Legislative Assembly and the National Reform Council will outlive the coup by forming a 120-member National Reform Steering Committee comprising NLA and NRC members, in addition to outside experts.

Certainly, the 36-member CDC is trying to do what's needed in its expeditious effort to cultivate and enforce a kind of democratic rule that is different from the past. It genuinely wants to get rid of corruption and bring about good governance. Its four principal objectives are appealing, namely to focus on citizen empowerment, eradicate corruption, promote social justice and bridge and heal Thailand's raw divide. But because the CDC is selected by the NLA, NRC, the cabinet and the military junta known as the National Council for Peace and Order — the latter two under Prime Minister Prayut Chan-o-cha — the constitution drafters may have overdone the draft with their zeal for the few "good people" to run the country on behalf of the rest.

Thailand is stuck in a convoluted constitutional conundrum. The current draft charter is unlikely to be its last. When the time comes for more constitutional considerations, the best bet might be to re-adopt the 1997 charter and making amendments to it the main task of constitution-crafting. It remains the only document that is wholesome, balanced and popularly legitimate.

After the past decade of volatility and turmoil that has sidelined Thaksin and crippled his party machine, and shown how his opponents have hardly done better at huge cost to Thailand's well-being, dusting off the 1997 charter and making changes to it — instead of starting from scratch, yet again — makes most sense.