Prison overcrowding is a major concern in many countries. With more than 10 million people in prisons worldwide, this issue has been raised by the United Nations on a number of occasions to call for responsive action from its member countries. 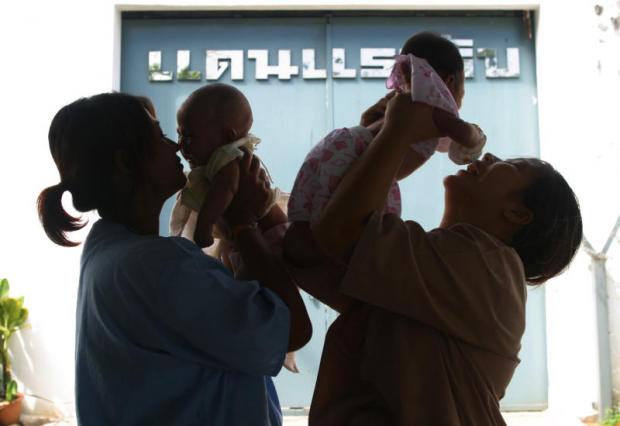 Female inmates play with their babies. Last year, there were more than 260 pregnant women in Thai prisons and over 250 babies living in prison with their mothers. Jetjaras na Ranong

Despite their small share of the prison population, the number of women prisoners worldwide has  increased at a significantly faster rate than men over the past decade. In Thailand, the female inmate population has risen from 26,321 in 2008 to 47,685 in 2015, or an 80% surge.

As a result, Thailand ranks as having the fourth-largest female prison population (following the United States, China and Russia), and has the highest rate of female incarceration in the world at 73 per 100,000 population.

When we take a closer look at the nature of female offenders, we find that most of them are not dangerous criminals or a serious threat to society. Most women are in fact in prison for non-violent crimes. This includes 80% of female inmates in Thailand who are convicted of drug-related offences.

As the criminal justice system continues to put so many women in prison for non-serious crimes, it raises the question as to whether or not women's individual circumstances and the social context of the offences have adequately been taken into consideration.

In addition to the fact that the continuous growth in the number of females in prison results from complex interplays between a number of issues, such as socio-economic inequality, the severity of penal policy, and even the attitude of the general public towards offenders, here are some more reasons why we should care.

First, across the globe, women prisoners share a common background which shapes their pathways to prison. Many have similar histories of abuse and trauma, limited access to education and work. Some have substance abuse, mental and physical health problems.

A study of 533 Thai female prisoners conducted by the Thailand Institute of Justice (TIJ) in 2013 revealed that 66% of women in prison are first-time offenders while more than half of them did not have enough income to live on.

Second, when women are sentenced to prison, they can face numerous difficulties because of strict prison regimes and the impact of imprisonment on their lives during their sentences and after release.

Prisons in most countries were originally designed for men. For that reason, they do not adequately respond to the specific needs of women such as their personal hygiene and reproductive health needs and higher risk of psychological problems.

Some groups of prisoners also face further challenges as a result of their specific requirements. For instance, pregnant women, breastfeeding mothers and women with dependent children in prison require special attention regarding medical care, food, exercise and facilities.

Lastly, incarcerating women not only negatively impacts the prisoners themselves but it also indirectly affects their families and children.

A large proportion of women in prisons worldwide are mothers. This includes 87% in Brazil, 80% in the United States, 66% in the United Kingdom, and 82% in Thailand. In November 2014, there were 267 pregnant women in the Thai prison system and 256 children living in prison with their mothers.

Imprisonment of mothers damages the maternal bond and causes life-long problems in children. Research shows children of jailed parents have twice the risk of having behavioural problems and poor psychological health, while they are also at greater risk of committing crimes.

In short, it is of paramount importance that we know more about these women offenders. Why did they commit their crimes? What will be the impact of detention of one individual who may be also a mother to innocent babies?

In 2010, there was a serious discussion on the strategies and best practices against overcrowding in correctional facilities at the 12th United Nations Congress on Crime Prevention and Criminal Justice (the UN Crime Congress). The United Nations Rules on the Treatment of Women Prisoners and Non-custodial Measures of Women Offenders (or the "Bangkok Rules"), adopted in the same year, is one positive change.

The Bangkok Rules provide a useful framework for international efforts to reduce the prison population and unnecessary use of jail sentences by introducing non-custodial sanctions and diversionary measures while also calling for a more gender-sensitive approach to dealing with women prisoners.

Five years after the adoption of the Bangkok Rules, prison overcrowding remains a fundamental challenge.

As pointed out by a representative of the United Nations Office on Drugs and Crime (UNODC) at the 13th UN Crime Congress in April "prison overcrowding can also be considered a symptom of a malfunctioning justice system, and the problems of overcrowding have to be dealt with by the prison administration, although the solutions are seldom within their reach".

As one of TIJ's goals is to promote international human rights standards and efficiency within the justice system, we consider the issue of prison overcrowding, including the promotion of the Bangkok Rules, our top priority. At the congress, TIJ worked to draw international cooperation to support the implementation of the Bangkok Rules. Although there are some positive developments to be celebrated, significant challenges still exist and the overall effort needs to continue.

We believe that the unresolved problem of prison overcrowding will always pose a significant threat to the quality of women's lives behind bars and hinder the effort to promote gender sensitivity in correctional practices. Therefore, criminal justice agencies should aim to reduce unnecessary imprisonment and increase the use of alternative forms of sentencing such as restorative justice approaches and community-based treatment where the offence is not serious.

Only when the chronic problem of prison overcrowding is sorted out - ending staff shortages and resource constraints once and for all - can we genuinely look forward to assuring the protection of basic human rights of all those in detention.

Kittipong Kittayarak is Executive Director of the Thailand Institute of Justice (TIJ). He is formerly Permanent Secretary of the Ministry of Justice.