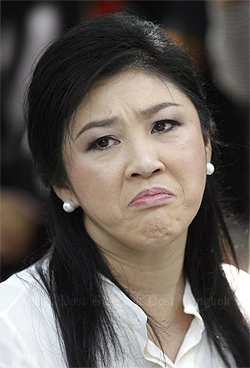 Readers should not get too excited by the fact that former premier Yingluck Shinawatra’s assets rose by 38 million baht during her time in office. While that may seem like a big increase to some, it actually represents a rather meagre return on the base assets that the former prime minister held prior to assuming office.

In fact, 38 million baht return on base assets of 541 million baht represents less than a 2.5% return per year. Surely, this is nothing to indicate illegal or illegitimate acquisition of assets. In reality, this is an extremely conservative and modest return that any investor could easily expect to achieve through legitimate investments.

The “surge in Yingluck’s assets” story and “spoils of office” graphic is, more than anything, an indication of the bias of the Bangkok Post against the last legitimate government of Thailand.

An increase of 38 million baht over three years amounts to only 6% in total, or about 2% per year, which is less than the rate of inflation. If anything, it shows that Ms Yingluck wasn’t very adept at investing her assets at a time when world stock markets were rocketing.

Re: “Gun a Thaksin plot?” (PostBag, June 27). Somsak Pola is suspicious that the case in which former Bangkok police chief Kamronwit Thoopkrachang was arrested at Narita airport in Tokyo — for having a handgun with him while boarding a plane — might have been a conspiracy masterminded by “that big guy”, to give the Thai junta government a bad reputation. I don’t think so.

Most Thai smart men and women — once they have gone into politics, or the bureaucracy — become so obsessed with their power and self-importance that they tend to do unimaginable things.

This is not a conspiracy in any way. It has something to do with hubris and, perhaps, imbecility.

NOT FIT TO SECURE OUR SKIES

Suvarnabhumi airport deputy director Phet Chancharoen should immediately be transferred to an inactive post for his ignorant remarks concerning the undetected gun that passed through Thailand’s flagship airport.

Khun Phet states that since the gun was small in nature, it would not have caused any damage to an aircraft. Did I read his comments correctly? Does he understand how little it took to bring down four huge commercial jets and kill more than 3,000 people in the September 11 attacks?

Transfer this man fast. He is not the one that Thailand needs to oversee airport security.

The navy’s deal to buy Chinese subs at 12 billion baht each smells fishy. In 2011, they wanted German subs at 7.7 billion baht each. Why would they now want to spend 56% more of your money, dear reader, to get Chinese subs instead of German? Surely it’s not because of technology: the U-boats of World War II were the dread of thousands of Allied sailors before the People’s Republic of China was even founded.

Even now, it’s not for nothing that the number one car manufacturer in China is German, with 14% (VW), while the best the Chinese can do at home is seventh, with just 6% (Cherry) according to market researchers JD Power.

The navy’s rationale is as opaque as Chao Phraya mud.

PM Prayut should order the navy to justify the plan, post the terms of reference and bids from each candidate on the internet, and ask who can match the German 2011 bid, adjusted for inflation.

As Hamlet would have put it: “Something’s rotten in Thailand.” Might it be the smell of corruption?

MANNERS SHINE IN THE RAIN

It is often very revealing of a person’s true character to observe how they behave in adverse circumstances.

A recent morning here in Chiang Mai well-illustrated this salient point. It had rained earlier, and there were many roadside puddles of water.

Without exception, as I walked along the sodden streets, each passing Thai scooter- or motorbike-rider, and local car drivers too, all slowed down as they went through puddles near the pavement, to avoid splashing the pedestrians.

This is but one of many instances when our dear host country nationals, ever gracious as most of them are, show exceptional levels of politeness and consideration to other people.

Lamentably, many of the foreign drivers that day sped through the puddles, unconcerned at splashing water upon those whom they hurried past.

Reform will take far longer than the prime minister’s estimate. The necessary real reform is not about simple political or administrative issues.

The deep-rooted and traditionally undisciplined nature of Thais must be reformed.

This requires moral education and it must be started from infancy by all Thai parents.