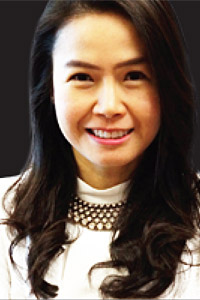 One government policy which has gained much public attention is the creation of Special Economic Zones (SEZs).

The government under Gen Prayut Chan-o-cha has given this policy a strong push by offering generous incentives for investors in the hope it will enhance the linkages between Thailand and other Asean countries and increase Thailand's competitiveness. However, with poorly defined strategies, SEZs are unlikely to increase Thailand's competitiveness, even with generous incentives.

This year the government has announced SEZs in 10 border provinces, consisting of Tak, Mukdahan, Sa-Kaeo, Trat and Songkhla in the first phase, and five more in the second phase.

The first phase of the zones covers 13 target industries, many of which are labour-intensive, such as the manufacturing of garments, leather goods, gems and jewellery, furniture, and ceramic products.

The incentives for doing business in the zones are generous. The maximum benefits granted by the Board of Investment (BOI) include corporate income tax (CIT) exemptions for the first eight years and 50% deduction for another five years and other BOI's benefits, such as double deduction of transportation costs, electricity and power supplies for 10 years and import duty exemptions for raw materials and essentials used in production for export for five years.

Even projects that are not promoted by the BOI are eligible to get 50% CIT deduction for 10 years. Firms in the zones will also enjoy low-interest loans, one-stop services for investment and for immigration, and good infrastructure. More importantly, they are allowed to employ commuting unskilled foreign workers or those working no more than seven days per entry.

Although the government promotes SEZs by providing strong incentives, the zones were poorly designed and thus are unlikely to be effective.

To be a powerful tool to boost Thailand's competitiveness, such zones should play a key role in enhancing complementary links in production chains between Thailand and its neighbours. The zones should also not be used to promote labour-intensive industries because Thailand no longer has a comparative advantage in cheap labour.

More importantly, sticking to these industries will never make any countries competitive in the long run. Large inflows of unskilled workers will inadvertently discourage Thai companies from upgrading to higher value-added activities. 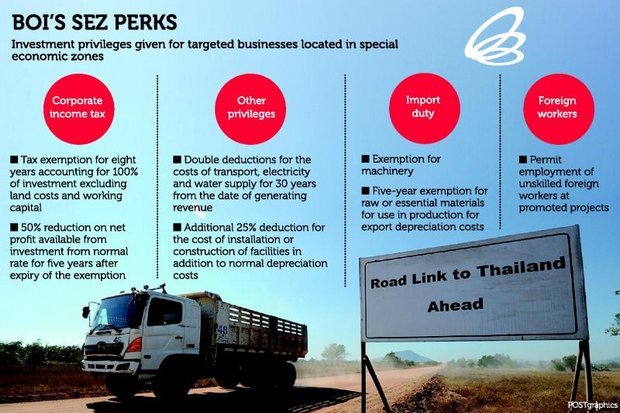 Ironically, the zones will not be able to solve the problem of managing migrant workers in Thailand as long as the national migrant worker policy is unclear and law enforcement is weak. Above all, labour-intensive exporting businesses are not likely to invest in SEZs as they will gain more by relocating to neighbouring countries with cheaper labour costs and preferential import duties from main markets, such as the US and EU.

Based on a Thailand Development Research Institute (TDRI) study, garments produced in Cambodia and Laos are about 15% cheaper than those in Thailand. Only firms selling domestically will get the windfall from the zones.

Rather than focusing on low value-added and low-technology industries, Thailand should promote its competitiveness by turning the zones into Special Innovation Zones (SIZs), production bases for higher value-added activities.

The government is right to invest in improving infrastructure, rationalising customs checkpoints by separating immigration checkpoints and cargo checkpoints, and providing one-stop services for trade and investment in border areas. Again, that should be accompanied by promoting the right kinds of industries, those generating higher added value.

In conclusion, the zones are a way to reach a policy goal, but cannot substitute for good industrial and labour policies. To enhance its competitiveness and linkages with its neighbours, Thailand should seek to relocate labour-intensive activities to neighbouring countries, while upgrading domestic production to higher value-added activities. The government should turn SEZs, catered for producing low value-added products into SIZs, designed for higher value-added activities by encouraging more high-skilled foreign workers and professionals to work in Thailand, while upgrading the technological capabilities of the domestic workforce.

Saowaruj Rattanakhamfu, PhD, is Research Fellow at the Thailand Development Research Institute. Policy analyses from the TDRI appear in the Bangkok Post on alternate Wednesdays.

Research Fellow at the Thailand Development Research Institute. Policy analyses from the TDRI appear in the Bangkok Post on alternate Wednesdays.