The Ratchaprasong bombing on Monday took place one day after the 70th anniversary of the Thai Peace Day when Pridi Banomyong in his capacity as the regent of King Rama VIII announced the declaration that nullified the Jan 25, 1942 declaration of war against Great Britain and the US.

The peace declaration -- together with other non-violent acts such as people secretly helping Allied prisoners, the select economic and cultural non-cooperation with the Japanese armies carried out by Thais of all persuasions from ordinary citizens to elites and royalty -- almost miraculously helped carry Thailand into the embrace of other WWII winning countries. That was a time of occupation and war, with a form of terror besieging human societies. 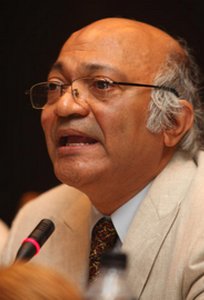 Fed by a climate of despair, extremism and weak state capability to maintain law and order, terrorism attacks cherished human values: Respect for human rights, the rule of law, rules of war that protect civilians, tolerance among peoples and nations, and the peaceful resolution of conflicts.

The Ratchaprasong bombing that killed 20 people, including a four-year-old Malaysian girl, and wounded 125 others -- 68 of whom are still in hospital at the time of writing -- is by all measures an act of terror. Apart from the efforts to find those responsible for this heinous act and the government's responsibilities, a more pertinent question is what should and could be done by ordinary people, preferably with non-violent actions, to help prevent such an atrocity from happening again?

I know this question is indeed a tall order, but extremely necessary at this time. Paraphrasing Churchill's remark about democracy, Professor Tom Hastings of Portland, Oregon wrote in his book Nonviolent Response to Terrorism (2004) that: "Nonviolence is the absolute worst way to react to a terrorist attack, except for all the rest of the ways we might react to a terrorist attack." To deal with terrorism nonviolently, I would argue, is to counter the work done by such an act of terror on political society.

To be able to do so is to understand how terrorism works. First, it works by severing the link between the targets of violence and the reason for violence -- those who are killed and wounded have suffered from violence without relating to why it was carried out. Second, because it can affect anyone at any time or place, a sacred space such as the Erawan shrine or a transportation hub such as the skytrain station near Sathon bridge, the act of terror aims to rob a society of a precious sense of certainty that allows members to continue their lives in normality. Third, the act of terror reaches its zenith of success when it can transform a society that mourns the tragic fate of victims with kindness and sorrow into a society of victimisers bent on using violence in an emotional climate of hatred.

Among other things, what the act of terror on Monday did is to reveal the nakedness of the instrument of violence which can never be justified, not by the noble goals of fighting in the name of democracy, equality, global justice against religious persecution, or self governance. It cannot because what such violence does is to spit in the face of humanity which lies as the basis for all these noble goals. By that I mean the way violence works as revealed by this act of terror is to degrade a living and breathing human with all the love and care the person has through time into nothingness, meaninglessness.

For a society to fight against terror with nonviolence, ordinary people have to do three things. First, to refuse any reductionist persuasion to relegate human importance to meaninglessness and to recreate the others as a one-dimensional enemy informed by hatred and void of any human decency; second, to return one's society to normality as quickly as possible; and third, to continue to cherish the value of kindness to all regardless of who they are, as evident in the tireless and selfless efforts by ordinary Thais, professionals and otherwise, to come out in the night and offer assistance including donating their own blood, to those who lay dying and in pain without asking who these people were. As we have done in different contexts in the past, perhaps, with these actions, Thai society can stand up against the threat of terror without losing our own humanity.