Xi Jinping may govern one-fifth of humanity, yet when the Chinese president arrives in Washington he risks being upstaged by the leader of another billion-strong flock: Pope Francis.

Hours before Mr Xi's plane touched down yesterday, Pope Francis would become the first pontiff to address a joint session of Congress. As he prepares for a summit with US President Barack Obama Friday, the head of the world's smallest state will address the United Nations.

That evening, as Mr Xi dons his formal wear for a White House state dinner, Pope Francis will play Madison Square Garden with a prime-time Mass for thousands in Manhattan. 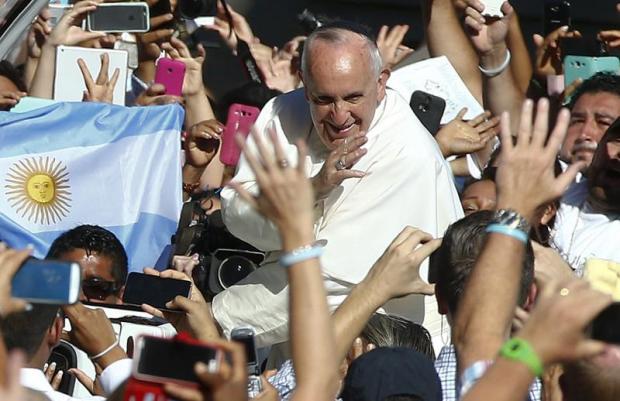 Pope Francis waves to crowds gathered to see him as he arrives at Basilica of the National Shrine of the Immaculate Conception in Washington on Wednesday. REUTERS

"There's no question Francis will be the star of the show when he's in town," John L Allen, author of Against the Tide: The Radical Leadership of Pope Francis said in an interview. "Anyone else will be on the B-list. Princess Diana, maybe, could have rivalled him when she was alive. It's a short list and Xi is not on it."

Dubbed the "rock star" pope for the electrifying effect his 30-month pontificate has had on the world, Pope Francis is a tough act to follow, though Shakira will give it a go with a 10-minute concert after his UN speech.

Mr Xi, 62, has the misfortune of trailing the spry 78-year-old Argentine by a day when he arrives to the US capital and then follows him up to New York.

With the Communist Party's chokehold on Catholicism in China and the Vatican's support for Taiwan straining relations, it's no surprise the two leaders won't overlap -- the pope's plane departs New York hours before Mr Xi touches down.

Divisions aside, China is seen as a potential growth market for the Church at a time of stagnation in the faith in Western Europe, and Pope Francis has made improving ties a priority of his papacy.

Under Mr Xi, China has also signalled a willingness to engage, allowing the pope's plane to fly over Chinese airspace when Pope Francis was travelling to South Korea in Aug 2014, a courtesy denied Pope John Paul II on his Asian trips.

Pope Francis sent Mr Xi a personal message from the plane extending his "best wishes to Your Excellency and your fellow citizens". He also sent a message on the return flight.

One may be a humble Jesuit and the other a godless Communist, but there are similarities between the two leaders.

They came to power within a day of each other, with Mr Xi taking over as Chinese president on March 14, 2013 a day after the familiar cry of Habemus Papam introduced a little-known cardinal named Jorge Mario Bergoglio to the crowds in St Peter's Square as the first pope to hail from Latin America.

Upon taking power, the two embarked on campaigns to weed out corruption in the respective institutions and both regularly criticise the excesses of Western capitalism and the blind pursuit of material wealth.

Mr Xi and Pope Francis will need to find more common ground to end over a half a century of mistrust and suspicion.

The Chinese government broke off diplomatic relations with the Vatican after coming to power in 1949 and the two sides remain divided over the level of influence that the Vatican can exert over the country's estimated 12 million Catholics.

The officially atheist Communist Party insists only its surrogates can name the bishops that guide the flock and that their loyalty must be to the state-sanctioned Chinese Patriotic Catholic Association, not the pope.

Despite the 1982 constitution's guarantee of religious freedom, Mr Xi's government has cracked down on Christianity in Zhejiang province, home to a growing number of underground churches viewed as a potential threat to one-party rule.

Much of the campaign, which involved tearing down crosses and destroying some churches, was largely directed at Protestant denominations, though the clampdown rattled the country's Catholics, who participated in protests against the actions.

"The most controversial question to be resolved relates to the nomination of bishops, but there are also other issues to be resolved including the fundamental issue as to the level of religious freedom that the Church leadership can have in mainland China," said Gerard O'Connell, associate editor and Vatican bureau chief for America magazine.

Since both leaders came to power, there are signs that back-channel talks may be yielding results. Last month, China ordained its first bishop in three years with Vatican-backing.

Father Joseph Zhang Yinlin, 44, was anointed bishop of Anyang diocese in Henan Province on Aug 4. About 100 priests were at the ordination, with only Vatican- approved bishops attending the event.

Three years ago, the 2012 ordination of Thaddeus Ma Daqin as an auxiliary bishop in Shanghai reaped a radically different outcome. Bishop Ma denounced the Chinese Patriotic Catholic Association at the ceremony and has been under house arrest since, Vatican Radio reported.

"We can see the improvement and development of the relations over the past year," said Wang Yiwei, professor of international relations at Renmin University in Beijing. "The pope has been sending goodwill gestures to China and China's ambassador to Italy has close communication with the Vatican."

But Taiwan remains a stubborn obstacle to a restoration of ties.

The Vatican is one of fewer than two dozen sovereign nations that maintain full-diplomatic relations with the mainland's civil war foe.

Pope Francis would need to drop the island, which China considers a breakaway province, to secure renewed ties with the world's second-biggest economy.

Mr Xi, too, stands to gain from a closer relationship with the Holy See, the central government of Catholic Church.

It "remains the only European state that still keeps diplomatic relations with Taiwan, it feels like a big missing piece for Beijing," said Kung Lap Yan, an associate professor at the Divinity School of Chung Chi College at the Chinese University of Hong Kong.

"So if they can establish formal ties, it can boost China's international status and reputation." ©Bloomberg