Migrant crisis is proving very lucrative for some
Opinion

Migrant crisis is proving very lucrative for some 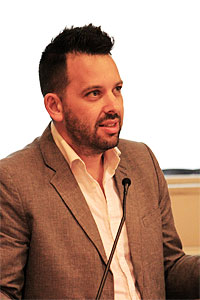 Monetising the waves of refugees surging into Europe is not the most common human response to tragedy. One of the greatest mass movements of people in modern history has caused a huge outpouring of solidarity with those on the move. But it has also created anger, suspicion and violence.

A grim reality of the current migrant crisis sweeping Europe -- a continent that prefers surveillance over humanitarian support -- is the growing number of corporations seeing financial opportunity in the most vulnerable people. Refugees become numbers to be processed; the profit motive is paramount in the minds of many multinationals.

Immigration is big business. Globally, companies' like European Homecare and ORS Service have grim records -- treating both inmates and guards with contempt. There's no financial incentive for the firm to provide the best training, healthcare, food or mental health. I've witnessed this first-hand in detention centres in both the US and Australia.

Politically, the arrangement also suits both the company and the government, blaming the other when something inevitably goes wrong. Publicly run detention centres and prisons are hardly utopian and remain replete with problems -- but at least there's one level of public accountability.

In Europe, today, many nations are struggling to cope with the influx of refugees. Some citizens in Greece have seen an opportunity to turn a profit and are asking new arrivals for far too much money for water and to charge their smartphones. More significantly, private housing firms in Sweden are massively overcharging for properties. Companies have been accused of profiteering in a country that takes large numbers of refugees, including unaccompanied children. Some private sector contractors are "cowboys who are only there because they want to make heaps of money", Marie Sallnas, professor of social work at Stockholm University, told The Guardian.

In Germany, housing company European Homecare is working for the government to provide refugee shelters. "We're doing something some people consider dirty: we make money," said company spokesman Klaus Kocks. With 1,000 staff caring for 15,000 refugees across the state, the company has become a major player in the immigration industrial complex. Cash starved mayors and officials often find a privately run-company more attractive because costs are initially lower. But examples in other nations, such as America and Australia -- where vast parts of the refugee network has been outsourced -- shows that human rights are breached when the profit motive is the primary, determining factor.

Traiskirchen camp in Austria, the largest migrant facility in the country, has seen food shortages, poor hygiene and overcrowding. The United Nations refugee agency said it was "beneath human dignity".

Responding to this claim, the chief executive of ORS said the company is working to improve conditions.

"Any professional would be brought to the limits of what is possible," he said. "The team there does its very best, and in extremely difficult conditions."

Still, those conditions are unsurprising and unacceptable for anybody who has seen unaccountable and secretive privatised detention camps in America, Britain or Australia. The Independent

Antony Loewenstein is an independent journalist and author of 'Disaster Capitalism: Making A Killing Out Of Catastrophe'.

Antony Loewenstein is an independent journalist and author of 'Disaster Capitalism: Making A Killing Out Of Catastrophe'.