Aung Zaw Founder and editor of the Irrawaddy Magazine

Myanmar voters head to the polls on Sunday for a general election that could be a milestone moment for the country, provided it is free and fair.

If the process runs smoothly, there may be many new faces when the parliament convenes in early 2016. However, many in Myanmar are looking to Sunday and beyond with a degree of trepidation, their past experience having taught them to take nothing for granted.

Individual expectations for Sunday's poll may depend on whether you're an optimist or a pessimist.

Observers in the latter camp may fear the worst, including the potential for violence on or soon after the election; the rising political and social influence of the Buddhist nationalist group, Ma Ba Tha; and the questionable integrity and impartiality of the Union Election Commission -- despite it receiving foreign funding and technical assistance. 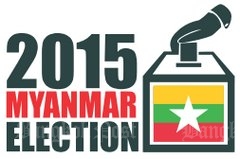 In spite of repeated promises to hold a free and fair election, many think that, by hook or by crook, the establishment will largely remain in power, including, quite possibly, Thein Sein as president for a second term.

The fear is that, despite the potential for the National League for Democracy (NLD) to gain significant traction in the 2016 parliament, the army and ruling party may find a way to dilute or disregard the result.

In any functioning democracy, the losing party has little say in the formation of the subsequent government. However, in Myanmar, several constitutional clauses gift the military an ongoing political role, regardless of the election result.

Indeed, it has long been pointed out that the army is the key institution in Myanmar, not the government. Some worry that the army may cite national security grounds to take over governance, as enshrined in the country's 2008 army-drafted charter which mandates the commander-in-chief's "right to take over and exercise state sovereign power" in a state of emergency.

While Myanmar's military chief Min Aung Hlaing has repeatedly vowed to respect the election result, he has also raised eyebrows in recent weeks by calling on military personnel to vote for the "correct" candidates who can "protect race and religion".

Others in the pessimist camp have also raised the prospect that some Western governments and donor countries would not be displeased to see Thein Sein continue as president, for the sake of stability and continuity.

In contrast, those of an optimistic bent will be looking to the election as a key driver of meaningful change in a country still reeling from almost 50 years of direct military rule.

In this rosy scenario, the NLD and ethnic political parties will win a majority of seats and the government will transfer power, in good faith and without violence. The international community will hail the country's transition as a bright spot in a region of authoritarianism.

With an NLD victory, more foreign investors would hone in on Myanmar and the US would remove remaining sanctions, as the story would go; Myanmar would be ready for full engagement with the international community.

However, even supreme optimists would realise that a free and fair election is not the panacea for all Myanmar's political ills. The military, for example, still commands a quarter of parliamentary seats and security posts in the executive.

Thus, optimists also acknowledge the military's strength and would anticipate further change only after meaningful negotiations involving the army's top brass, Aung San Suu Kyi and allied stakeholders. These negotiations would most likely proceed on the assumption that Ms Suu Kyi would not seek justice and accountability for past abuses.

Furthermore, in order to appease the existing hierarchy, a coalition government is a possibility.

An NLD-majority parliament would also be expected to set the country on the path to genuine and lasting peace, including bringing those armed groups that have not signed the so-called nationwide ceasefire agreement into the fold and instituting meaningful political dialogue.

Ms Suu Kyi's supporters believe that, beyond shortcomings in her leadership, "The Lady" is, after all these years, still destined to lead the country.

However, there remains the not-insignificant matter of the constitution, which contains a clause effectively barring her from the presidency.

Whichever camp voters belong to, the majority in Myanmar will be hoping for a better, brighter future when the ink dries on ballots on Sunday.

Aung Zaw is founder and editor-in-chief of 'The Irrawaddy'.

Founder and editor of the Irrawaddy Magazine

Founder and editor of the Irrawaddy Magazine