It is a long walk on rugged terrain. The nearest traditional rice field of the indigenous Karen is five kilometres away from the village, tucked away in a dense forest. Yet Mueno, while carrying her three-old son, shows no sign of fatigue even as I am gasping for breath.

"You have to see it with your own eyes," says the widow of Karen land rights activist Porlajee "Billy" Rakchongcharoen. "If you don't understand how rotational farming works without destroying the forests, land conflicts between state authorities and indigenous Karen forest dwellers can never be solved," she speaks in her calm, stoic voice.

It will be two years this April since her husband disappeared without a trace after being arrested by then Kaeng Krachan National Park chief Chaiwat Limlikhitaksorn. Billy was on his way to collect information about violent forest evictions in 2011 which involved the torching of Karen peasants' thatched-roof shacks and rice barns, to file a lawsuit against Mr Chaiwat.

Mueno's quest for justice remains elusive. The court rejected her petition for an urgent hearing against Mr Chaiwat over Billy's mysterious disappearance. The much-feared ex-park chief has finally been transferred, but not relieved of duty, even though police also charged him with ordering the murder of another local activist, Karen land rights advocate Tatkamol Ob-om. That case is struggling for lack of evidence.

There was a glimmer of hope recently when the Public Sector Anti-Corruption Commission (PACC) took up charges of malfeasance in office against Mr Chaiwat for evicting and burning Karen villagers' homes. But even if punishment is meted out, Mueno still sees no end in sight to systematic evictions and other attempts to uproot indigenous Karen forest dwellers.

She is right. The crux of the problem is the negative stereotyping of hilltribe people as major forest destroyers. While authorities turn the other way when mountain after mountain is denuded by agro-giants' cash crop plantations, mining companies, big dams, state highways and encroachment by local mafia, the hill peoples are villainised and evicted, if not arrested and sent to jail. "We have to address the problem at its heart -- misunderstandings of our traditional way of life," she says.

The eviction fear has heightened in the past few years now that Kaeng Krachan is being proposed as a World Heritage site without addressing the land rights of indigenous Karen there. It is why Mueno decided to leave her four children with her mother to visit Huay Krasu village, also in Kaeng Krachan National Park, for one weekend. The Karen Network for Culture and Environment in the West is organising an annual ceremony after the harvest season to pay respect to Mae Posop, a rice goddess and Mae Toranee, the earth goddess. A visit to a rotational rice field is part of the event to explain to city visitors why it is key to the Karen forest dwellers' subsistence way of life. 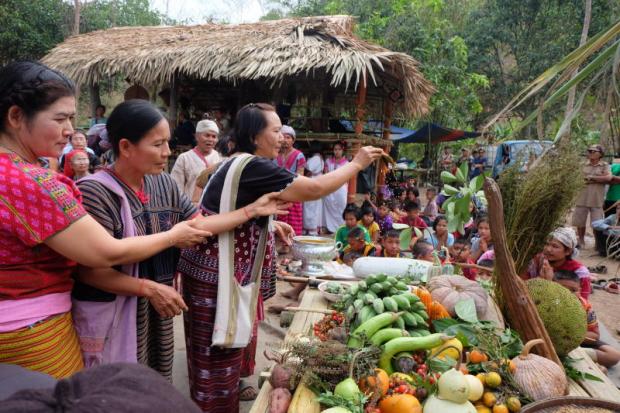 A Karen female elder sprinkles sacred water on rice and food from a Karen mixed rice field in a ceremony to pay respect to the rice and earth goddesses. (Photo by Sanitsuda Ekachai)

Eventually we arrived at a rai khao. It is wrong to translate it as a paddy field as seen in low-lying areas. Instead, the Karen's rai khao is a garden of diverse vegetables mixed with indigenous rice plants. Like magic, Ratree, a Huay Krasu Karen mother, pulls from a thicket of greenery a handful of wild tomatoes for me. The plot also has chillies, cucumbers, sesame, different kinds of local gourds and eggplants, banana trees, and lots of other plants I don't know. "This is where we get our food without having to buy anything." As part of a rotational farm system, the rai khao plot is left fallow for several years until the forest grows back, which retains the richness of the soil and preserves the local biodiversity. They have several plots to till in their rotation cycle. But when they return to clear and burn one of their old plots for the next planting season, they are accused of engaging in slash-and-burn farming. Hence the forest evictions and forced relocations.

Authorities refuse to accept the Karen rotational farming is ecological. Yet they cannot explain why the forests remain lush despite hundreds of years of rotational farming there. After forced relocation, the Karen are given small plots of land, mostly rocky with poor soil and without water. They are forced to follow the standard farming method of tilling on the same plot year after year. Harsh poverty and hunger follows. Many Karen head back into their own homes deep in the jungles. Hence, the ex-park chief's attempt to bring back them back by burning their houses and rice barns.

The new park chief, Kamol Nuanyai, seems more conciliatory. "It's okay to till on your old plots. But not new ones," he told the Karen gathering at Huay Krasu. But arrests continue, perpetuating fear and resentment on the ground.

Ratree, a mother of three, is angry. And she should be. Forced to till on her same small plot, she was able to gather only 22 buckets of rice. While hunger looms in her family, a neighbour who risked arrest to return to his old rotational plot gathered over 100 buckets of rice plus year-round vegetables and other food. "It's clear that our traditional system works better, for people and for nature. Yet authorities refuse to listen to us," she says, tears welling in her eyes.

The centenarian Ko-ee, whose house was also burned in 2011, is at Huay Krasu too to preside over the rice ceremony, and ask forest authorities if he can return to his forest home. "What does it mean when he was told his safety cannot be guaranteed?" asked Mueno.

While Unesco's rejection of Thailand's proposal to make Kaeng Krachan Forest Complex a World Heritage site is based on violations of indigenous forest dwellers' rights, there has been little effort so far to fix the problems.

Regional forest chief Saratcha Suriyakul Na Ayutthaya blames it on the law. Forest officials cannot recognise the Karen's ancestral land rights because the law only recognises one's ownership when the land is tilled every year. The Karen's rotational farming, however, leaves the land fallow for several years. "You fix the law so we can allow you to continue with your farming system," he says.

For Mueno and other Karen, this is just a bucket-passing game. Why leave the burden of legal change to the powerless? Why refuse to accept the merits of the rotational fallow system when there is already much research in its favour.

The Karen at Huay Krasu have proposed a plan that will allow the 26 families to do rotational farming on their original plots in exchange for protecting the forests from outsiders. The plan meets with silence. "Why are they refusing to listen to us?" asks Mueno. The answer is not lack of knowledge. It is the authorities' fear of losing of central control. Conflicts are inevitable when the Karen's fear of hunger and starvation overpowers their fear of authorities. "There will be more Billys," says Mueno. "It happens when our voices remain unheard."