Three days after the publication of the second attempt at presenting an acceptable draft constitution, there appears to be little cause for optimism. The chief drafter of Constitution 2.0, Meechai Ruchupan, doubts he can make the November2017 deadline for the first post-coup election. No political party or politician has had a kind word for his work. Newspaper headlines run along the lines of "Thumbs down for charter". The prime minister already believes voters may reject it at the planned referendum.

Despite all of the above, the governing National Council for Peace and Order (NCPO) under Gen Prayut Chan-o-cha intends to push ahead with the draft. It is not clear why. The government and military spokesmen have told the country it is all about the political roadmap controlling the return to civilian government.

But it is all a shambles. Gen Prayut's original roadmap has been torn up and continually rewritten. The roadmap produced shortly after the May 22, 2014, coup promised elections would be held in 2015. A subsequent roadmap promised elections in mid-2016. That then became 2017 -- and last Friday when Mr Meechai presented his draft constitution, 2017 looks like becoming 2018.

The question is, why is the military regime pressing ahead with Mr Meechai's draft like it was an optimistic and publicly anticipated proposal? Mr Meechai's effort appears to have followed regime guidelines. But its major failing is the simple lack of public input. The junta has kept the people's voice at bay -- a lamentable error. The lack of participation by the real stakeholders means a draft charter without support.

The decision to go with Mr Meechai's offering is a questionable one. The referendum on his draft, which must be held, will cost about 3 billion baht, on top of the usual dislocations of any poll. That is a lot of money to throw at something that as of today seems little more than an exercise in futility.

The strongest advocate of the constitution heard so far is the government's legal expert, Deputy Prime Minister Wissanu Krea-ngam. His reasoning for voting in favour of the draft is that while it is not democratic, it has extra powers to check political corruption. As an endorsement of Mr Meechai's draft, that is weak. Then there is this: last week, a grim prime minister promised that if the referendum fails, he will bring back a constitution from the past. He did not say which former charter he favours. 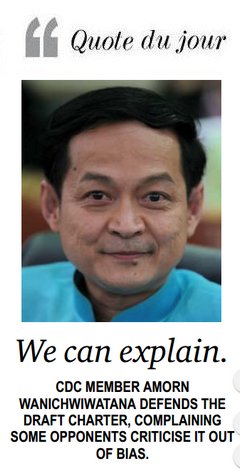 Gen Prayut still has a range of choices. That includes, once again, going back to square one. Another attempt to write a constitution, this time with different guidelines, could work. Alternatively, the premier and the junta could simply call up the popular 1997 constitution and make a few minor tweaks to modernise and fix its loopholes. Better still, it could call on the public to participate in this effort.

This would probably be less risky than sticking with Constitution 2.0 in the name of the roadmap. It is already clear the draft charter is a major disappointment across broad sectors, and that includes this military government.

Gen Prayut must weigh the choices extremely carefully. The constantly slipping election deadline is not acceptable to many -- combine that with increasing crackdowns on dissent, and the old suspicions of the military seeking ways to cling to power are resurfacing. Gen Prayut must remove those misgivings. The best way to regain trust for a smooth exchange of military rule for civilian government is to allow the stakeholders to have a voice in drafting a constitution.