Since 2009, Thai governments have had a general nationwide migration policy to meet strong national economic, demographic and lifestyle demands that enabled -- but didn't necessarily ensure or promote -- the regularisation of irregular-entry lower skilled migrant workers from Myanmar, Cambodia , Laos and Vietnam).

This policy enabled an origin country nationality verification (NV) process for these workers.

Almost all low-skilled migrant labourers prior to 2009 entered Thailand irregularly through lucrative smuggling and trafficking routes and networks. A formal (memorandum of understanding or MoU) worker import system for migrant labourers only became functional from 2010. 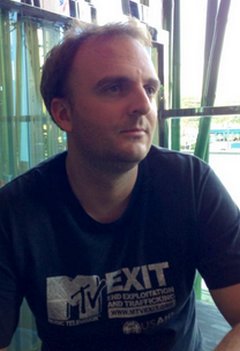 Andy Hall is international affairs adviser to the Migrant Worker Rights Network (MWRN) and State Enterprise Workers Relations Confederation (SERC). He can be reached at andyjhall1979@gmail.com and on Twitter as @atomicalandy. (Photo by Chaiyot Yongcharoenchai)

Since 2009, temporary or permanent passports and certificate of identity (CI) documents have been issued by a migrant worker's origin country within Thailand through the NV process at One Stop Service Centres to millions of these irregular workers who have become a cornerstone of the country's economic development.

With these documents, the workers then applied for Thai visas and work permits valid for two years at a time, which eventually -- after much policy confusion and lack of advance clarity -- enabled a stay in Thailand of up to a maximum of six years.

Passports and CIs issued through this non-transparent NV process were of three, five, six or 10 years' validity. Thai visas allowed two, four or six-year stays in the kingdom. Corruption and confusion was rampant in these seemingly well-designed processes which were never fully clear, nor well-organised. This policy and these regularisation systems have brought huge profits to brokers, agents and Thai/origin-country officials, as well as employers' HR staff.

However, fully regularised NV workers and new MoU workers coming into Thailand benefited from these regularisation process as follows: freedom of movement in Thailand and to/from home countries was possible (temporary Thai issued migrant ID cards restricted movement to province of registration only); access to social security systems was open (although not always clear benefits and access) as well as eligibility for bank accounts and driving licences. Workers were more strongly protected with their regular or fully legal status than before, however difficult access to rights remained in practice.

Workers with passports or CIs too often, however, have simply ended up throwing away valid or expired (4/5/6-year) documents when visa, passport or CI renewal processes since 2013/14 became unclear, impractical or exorbitantly expensive. This was because Thai and country-of-origin migration policies were often quietly and confusingly announced only once expiry dates had passed.

Many of these workers then applied for semi-regular temporary ID cards instead when the Prayut government allowed this regularisation. In addition, others returned home and entered Thailand anew with fresh names or identity documents at great expense.

Under the threat of a EU red flag for illegal fishing, the government trumpeted high regularisation statistics in fisheries and across the country when in fact many newly registered workers were formally registered with passports anyway. In addition, as a result of this policy chaos, hundreds of thousands of migrant workers often lost all accrued worker and social security benefits by starting anew with changed names and ID numbers. Bonuses and work incentives started afresh. Social security pensions and health benefits vanished.

In another important migration policy development, or U-turn, the cabinet on Feb 23 allowed all migrants in Thailand to move back to a temporary, semi-legal migrant ID card system as was the case pre-2009, whatever their current regular or irregular documentation status.

So are we now, after seven years, seeing a deregularisation process for migrant workers? Will migrant workers once again lose their identity status and nationality to a short-term, irregular or semi-legal registration status that will benefit primarily in the short-term Thailand's economic security and business needs for a flexible easily expendable lower skilled migrant workforce?

It's not clear yet whether the new policy move back to a semi-regular pink card migrant worker status will be compulsory, or if existing or expired migrant worker passports can still be renewed or extended with workers coming in and out of Thailand on a four-year limited formal or regular MoU entry scheme, as exists already.

Also, it's not yet clear what origin countries think of this migration policy U-turn which could make more of their workers irregular, with fewer rights protections and less formality of status. In particular, the Migrant Worker Rights Network (MWRN) will be working closely with Myanmar's new government, which is expected by many to champion stronger migrant worker rights during its first term in office.

In particular, the MWRN is deeply concerned at potential negative implications of the vague Thai government announcement for the future of millions of migrant workers in the country and is closely monitoring policy development announcements.

The MWRN cannot accept a return to the pre-2009 semi-legal or irregular status for millions of migrant workers in Thailand which will possibly lead to the eroding of basic migrant worker rights as past worker benefits -- such as pensions, health care and employee welfare benefits from long-term service for employees -- simply disappear.

If what we fear becomes a reality, the international community and buyers of exported goods manufactured in migrant labour-intensive industries should not accept these developments that fail once again to prioritise the security of millions.