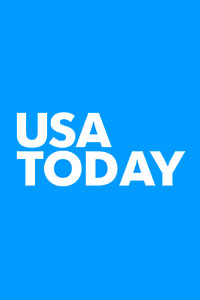 A Republican presidential race that has been dominated by economic anxiety and outsider politics heads toward important primaries today under the cloud of a troubling new issue: the prospect of violence.

The violence that has marred Donald Trump rallies -- forcing him to cancel one event on Friday night in Chicago -- has put the Republican front-runner on the defensive as rivals argue that his rhetoric is encouraging chaos and mayhem.

Mr Trump's opponents over the weekend seized on ugly incidents in recent days as the natural outgrowth of his rhetoric.

Ted Cruz, chasing Mr Trump in the fight for delegates, told NBC's Meet The Press on Sunday that it's wrong for protesters to try and shut down Trump rallies, but "at the end of the day in any campaign, responsibility starts at the top. And it is not beneficial when you have a presidential candidate like Donald Trump telling his supporters, 'Punch that guy in the face'."

Ohio Governor John Kasich, who faces a critical primary in his home state today, blasted Mr Trump on Saturday for creating "a toxic enivornment" that "has allowed his supporters, and those who sometimes seek confrontation, to come together in violence".

Ohio is among five states holding primaries today, along with Florida, Illinois, Missouri, and North Carolina.

Florida Senator Marco Rubio, who also desperately needs a win at home this week, said on Sunday the businessman exploits US citizens' anger and anxieties.

"There are people out there that listen to this stuff and we don't know how they're going to react," Mr Rubio said during an appearance on ABC's This Week. "And he keeps putting this stuff out there. We're going to have an ugly scene here; we already have seen these ugly scenes."

Mr Kasich and Mr Rubio each raised doubts over the weekend over whether they would back Mr Trump in the general election should he win the nomination.

On Sunday, peace -- and more unorthodox campaigning -- broke out at a Trump event in southern Illinois. Mr Trump pulled a man with a hand-scrawled message about immigration from the crowd at his appearance in Bloomington, Illinois.

Mr Trump sought, and received, permission from the Secret Service to allow the man, who identified himself as Alex Stypik, on stage after he spotted him wearing a T-shirt with the handwritten message "Legal Immigrants for Trump".

"We want people to come into our country," said Mr Trump, after seeing the man. "But they got to come legally like you, right?"

The man said that Mr Trump, who has called for building a wall along the US-Mexico border and faced criticism for once saying Mexico sends the US its "rapists", is not properly understood on the issue. Mr Stypik said his father brought him to the US, when he was 5 and did it "by the book".

During an evening rally in Boca Raton, Florida, Mr Trump praised his own decision to cancel the Friday Chicago rally and defended his campaign's handling of protesters in general.

"We want peace. We want happiness," Mr Trump said at a waterside park. Mr Trump arrived at the site via helicopter.

The event came off without incident until the end, when security officers forced out a small group of protesters who gathered near the media pen.

As Trump supporters yelled out support for Mr Trump, one of the protesters replied loudly: "Make America hate again!" Mr Trump apparently did not see the ejection.

Protesters also appeared at the Illinois event, but their demonstrations were muted compared with the chaos elsewhere in the Midwest on Friday and Saturday.

On Friday, the same day as the aborted Chicago rally, police arrested 32 people at a Trump rally in St Louis. Kansas City Police broke out pepper spray twice outside a Trump event on Saturday night to deal with protesters. That incident came after the Secret Service tackled a man who rushed a stage as Mr Trump delivered a speech earlier in the day in Vandalia, Ohio.

On Sunday, Mr Trump blamed organised liberal groups, including supporters of Democratic candidate Bernie Sanders, for the confrontation in Chicago. Mr Trump suggested his backers may retaliate by protesting at Mr Sanders' events.

"Bernie Sanders is lying when he says his disruptors aren't told to go to my events," Mr Trump tweeted on Sunday. "Be careful Bernie, or my supporters will go to yours."

Mr Sanders said Mr Trump is the one creating an atmosphere of violence and his campaign has had nothing to do with protests at Mr Trump's rallies.

"As is the case virtually every day, Donald Trump is showing the American people that he is a pathological liar," Mr Sanders said.

It's hard to know how, or if, the increasingly rough nature of the campaign might affect Mr Trump's performance at the ballot box, either tomorrow or in a general election.

Don Brucker, 46, who described himself as a Republican/Libertarian-leaning voter, said at the Bloomington, Illinois, rally that Mr Trump's Republican rivals are treading into dangerous territory that will alienate voters like him.

"I am very disappointed in those guys," said Mr Brucker, of Lexington, Illinois. "If the people elect Mr Trump, then he should be supported. I wouldn't say I'm pro-Trump, but I sure would say I'm pro anti-establishment."

Susan MacManus, a political scientist at the University of South Florida, said "the Trump people will dig in", figuring the billionaire is standing up to his enemies. But she said others who may have been considering the billionaire will re-think their options "in fear that this [violence] will spread just like a cancer across the country".

She added: "I think that's going to be truer of women voters than men."

Republican consultant Bruce Haynes said "it is completely fair for those who reject Mr Trump's rhetoric to call him out in the public square" and added that two wrongs don't make a right.

"Violence isn't going to create a single job or help a single family," Mr Haynes said. "Americans of all convictions should consider whether their words and actions are hurting and helping. Leadership is demonstrated by rising above the ugliness, not generating more of it."