Justice Minister Paiboon is unassuming, but he makes a lot of waves - The row between Adm Phajun and the police force has PM Prayut not a little perplexed - An uneasy stand-off is occurring over the military regime’s latest charter ideas

Since taking office after the 2014 coup, unassuming Justice Minister Paiboon Koomchaya has become one of the most high-profile cabinet ministers of the Prayut administration.

He is different in many ways from his cabinet peers in that he is often more than willing to speak out on controversial issues. 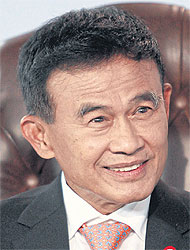 Paiboon: An asset to the government

Gen Paiboon appears on television often, and viewers would be hard-pressed not to have heard his comments on a number of major cases including alleged irregularities in the Rajabhakti Park project for which Deputy Defence Minister Udomdej Sitabutr has come in for a lot of public scrutiny.

Lately the justice minister has lambasted the legal team of Somdet Phra Maha Ratchamangalacharn of Wat Pak Nam for being uncooperative when they didn't provide a statement from the senior monk when investigators met him at the temple earlier this week.

In addition to corruption, Gen Paiboon is known to be concerned about tackling drugs. His focus on graft and drugs is said to, at one point, have frustrated Khunying Porntip Rojanasunan, the former director of the Central Institute of Forensic Science under the Justice Ministry.

On the illicit drug suppression front, Gen Paiboon has stressed the need to target the movement of precursor substances from countries that produce them. He has set his sights on making the Safe Mekong Coordination Centre instrumental in suppressing precursor chemicals as the drug-fighting body enters its third phase of operations this year.

The Safe Mekong Coordination Centre was initiated in 2013 to prosecute and block illegal drug smuggling in the region known as the Golden Triangle. This region comprises remote parts of Myanmar, Laos and Thailand, and is one of the largest illicit drugs-producing areas in the world. It is reported that an estimated 673 tonnes of opium, 50 tonnes of heroin, 20 tonnes of crystal methamphetamine and more than one billion speed pills are produced in this area each year.

This third phase will see the countries involved in the drug crackdown operations increased from four to six with Cambodia and Vietnam joining Thailand, China, Myanmar and Laos.

When he attended the 59th Session of the Commission on Narcotic Drugs (CND) in Vienna recently, Gen Paiboon did not hesitate to plead with the global forum to pay attention to the manufacturers of precursor chemicals that pose challenges to Thailand’s and the region’s efforts in wiping out drugs.

The CND brought together some 1,500 delegates from member countries, inter-governmental organisations, and civil society for a global discussion on the world illicit drug problem. The meeting is a preparation for a UN General Assembly Special Session on the World Drug Problem (UNGASS 2016), to be held in April.

In his speech to the Vienna gathering, the justice minister called on the international community to step up pressure on countries that produce precursor chemicals and to engage them in solving the drugs problem. He described this as an “ethical issue”.

According to a political source, Gen Paiboon is seen by observers as an asset to the National Council for Peace and Order which put him in charge of legal and judicial affairs from the outset of the regime.

As the days go by, he has proved to be up to the job, especially when narcotics and corruption are the administration’s top priorities. Gen Paiboon could also play a bigger role as the military government is preparing to take the country into a transitional period after the next general election.

In his Return Happiness to the Nation weekly television programme last week, Prime Minister Prayut Chan-o-cha voiced concern over the quarrel between the police and Adm Phajun Tamprateep, who blew the whistle on alleged position-buying in the police force, and mulled ways to defuse the row. 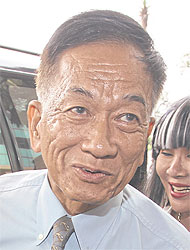 The Royal Thai Police are suing Adm Phajun, a National Reform Steering Assembly member, for defaming the force and for violating the Computer Crime Act by sharing a message on Line suggesting some officers paid money for their positions.

A former close aide to Privy Council president Gen Prem Tinsulanonda and former head of the Office of the Statesman’s Foundation, Adm Phajun was accused of forwarding the chat message claiming that an army general had a role in position-buying among police officers. He denied the accusation.

During his weekly talk programme, Gen Prayut said he might have to bring the two conflicting parties together for talks to thrash out their differences.

Gen Prayut said Adm Phajun may be well-meaning, though his remarks could cause damage.

“I discussed the issue with the deputy prime minister [Gen Prawit Wongsuwon who oversees the police force] and we agreed that they need to talk it through. I don’t want to see any conflict. If there is position-buying, you must go through proper channels so a probe will be launched. Stop trading accusations,” Gen Prayut said.

Gen Prayut said there are still claims of police receiving kickbacks and bribes, and national police chief Chakthip Chaijinda will look into them and punish any officers involved.

“In the future, those who pay kickbacks to officers will have to face penalties. If you don’t want to break the law, just don’t give anything [to the officers]. If they demand [kickbacks], file complaints against them.

“Today, everyone fights over everything, so how can we reform the country?” the prime minister complained.

When it comes to reform, police must be allowed to have their say and any proposals should gain recognition from police officers because they are the ones who must handle their own affairs under the chain of command, Gen Prayut said.

The prime minister stressed that police are important as they are the first stage of judicial proceedings, linking with the prosecution and the courts of justice. He said they must continually improve and boost their efficiency, and that long-term reform of the force is necessary.

Restructuring of the police is no easy task and involves a gradual process, the prime minister said. He believed that drastic and sudden changes would leave the police force no better off.

Meanwhile, Lt Gen Phitsanu Phutthawong, Gen Prem’s present close aide and the current head of the Office of the Statesman’s Foundation, insisted that Gen Prem was not involved in a conflict with Deputy Premier Prawit or anyone else in the National Council for Peace and Order.

Lt Gen Phitsanu revealed that Adm Phajun remains a “son” to Gen Prem, even now that Adm Phajun no longer serves as Gen Prem’s close aide following his retirement from the navy.

Gen Prem wanted Adm Phajun to take a rest after working for him for a long time, Lt Gen Phitsanu said.

A cat and mouse game

The latest constitution amendment proposals put forth by four of the “five rivers” have been met with a huge exclamation mark, even from within the charter-writing body, despite its members having prepared themselves for surprises. 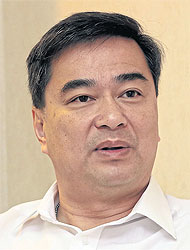 As expected by critics, the most provocative proposal has to do with the appointment of 250 senators — including military leaders who would take up key positions — to safeguard the constitution and ensure the continuity of national reforms.

However, some analysts are already looking beyond the general election, slated for the middle of next year, and making guesses as to who will lead the executive branch and who will assume the parliament presidency.

Occupants of the two posts will play a vital role in creating political stability in the post-poll period. Something that is feared by the National Council for Peace and Order (NCPO) is the potential for more turbulence. Once the council steps down from its predominant role, political unrest could return, fuelled by jockeying for posts and power struggles by politicians fresh and anxious after a forced hiatus of more than three years.

But critics harbour a growing concern that the NCPO will try and exert power even after the election. That, they say, could be manifested in the form of an appointed Senate, to be vested with the power to censure an elected government.

The Senate’s tenure will be five years during the transitional, post-election period, as proposed by the four rivers (the cabinet, the NCPO, the National Reform Steering Assembly and the National Legislative Assembly).

Its prime function would be to rein in the government if it fails to follow through with reforms, although such obligations could be misused as an excuse to purge the government of the day.

Analysts say the NCPO has been astute enough to design a way through which it can “dismount the tiger without being bitten” after the election is over and done with and its power fades.

The analysts agree the game that determines the future of the NCPO is about who gets what posts after the election. It has been speculated the prime minister could be someone who is both friendly to the major political parties as well as to the NCPO, which looks certain to remain influential post-poll.

The speculation doing the rounds is that Democrat Party leader Abhisit Vejjajiva may be in line to take the seat of parliament president. However, Mr Abhisit insists the post has never aroused his interest and it is not exactly his dream job.

A political source said Mr Abhisit is known to have delivered critical comments about the NCPO’s policies.

His most recent barb on the appointed Senate was hurled at the council only this week, several days after his party members urged the Constitution Drafting Committee to be brave and stand its ground in resisting any pressure from the NCPO and the military government to amend the charter in a way that pays lip-service to democracy.

Although Mr Abhisit is not thrilled by the idea of presiding over the House of Representatives, the post comes with the all-important power to nominate a premier and see to the royal command endorsing that person.