Caught on video were the separatists who occupied the Cho Airong district hospital, who gave every indication they had received large-unit training. (Photo courtesy Isoc)

Coming just less than two weeks apart, the recent car bomb on the outskirts of Pattani city and a major insurgent assault that invaded a hospital in Narathiwat indicate that beneath the surface of the violence sputtering across the southern border provinces the ground is shifting.

The latest attacks which occurred against a backdrop of a spike in daily shootings and bombings underscored a new insurgent emphasis on political messaging and mobilisation while effectively undermining three comforting assumptions implicit in the current official narrative.

Common currency as recently as January, those assumptions have been that, first, after a steady decline in violence since mid-2014, the separatist conflict is ebbing; second, that the dominant rebel faction, the Barisan Revolusi Nasional (BRN) has been militarily weakened and is politically divided between moderates and hard-liners; and third, that a peace process of sorts involving BRN moderates or at least individuals associated with them is back on track.

It is now difficult to give much credence to any of these propositions. It appears in fact that the security forces are confronting a challenge which is far from under control and may well be about to escalate.

A worst-case but not improbable interpretation of recent events suggests that BRN has used the 18-month lull since mid-2014 to recruit and train fresh intake while reassessing and recalibrating a strategy that after a decade of revolt has failed to achieve any substantive breakthroughs.

With that process behind it, the party may now be ready to push the conflict into a new phase of military and political operations.

Any such escalation would hark back to the 2011-2013 period which arguably marked the high point of the BRN's campaign to date. Those years saw sharp increase in car-bomb attacks including two -- in Phuket and Sadao -- outside the insurgents' traditional area of operations, though these were not acknowledged by the authorities as insurgency-related. From three in 2010, car-bomb incidents doubled to seven in 2011 and then surged to 13 in 2012 -- before falling to four in 2013, five in 2014 and just two last year.

More importantly, the 2011-2013 period was punctuated by a series of complex assaults on security force bases mostly in the strategic central region of Narathiwat which involved insurgents concentrating in platoon strength of between 30 to 60 fighters for single attacks.

Aimed primarily at seizing weapons, these operations began at an army base in Rangae district, Narathiwat, on Jan 19, 2011, when some 40 insurgents partially overran the camp, killing four soldiers and making off with some 50 assault rifles and machine-guns. The sub-district where the attack unfolded, Mareubo Tok, lent its name to the BRN's new tactic -- the "Maruebo Model".

Those attacks came to an abrupt halt in the early hours of Feb 13, 2013, when a breach of operational security resulted in at least 16 insurgents dying in an abortive assault on a Marine Corps base in Bacho district for which the Marines were ready and waiting.

The Mareubo Model or something like it is now appears to be back. Tactics employed in the March 13 attack on a ranger base staged from the compound of Cho Airong District Hospital were straight out of the same BRN play-book. A large force of well over 50 insurgents carried out a three-pronged operation involving a diversionary force, a primary assault group and a third team using an improvised explosive device to interdict reinforcements and cover the insurgent withdrawal.

CCTV footage of the brazen daylight attack through the hospital was also telling -- as the BRN intended it to be. It showed combatants dressed in black fatigues and balaclavas moving tactically and with good discipline between and in and out of buildings in a manner that strongly suggested unit-level training.

But there were also differences with earlier attacks in that the objectives of the latest operation were political rather than military. Given open ground and a wall between the hospital and the ranger base the attackers clearly had no intention of attempting to overrun the base and seize weapons.

Underscored by a massive expenditure of ammunition by the attackers -- over 1,800 spent shell-casings were later found -- the entire exercise appeared to be a dramatic show of force intended to bolster the BRN's profile and embarrass the security forces. Seven rangers and one insurgent -- but significantly no civilians -- were wounded. 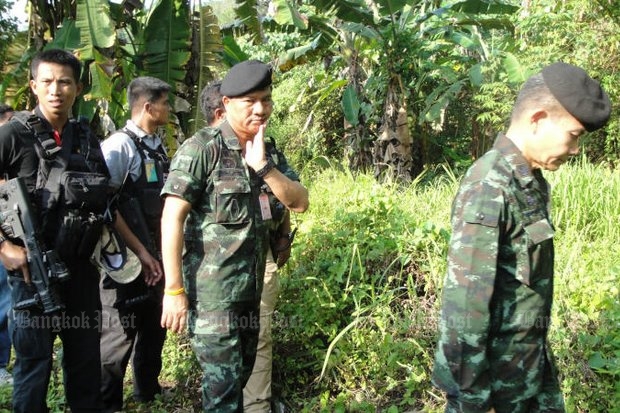 Security forces conducted a lengthy investigation of the attack on the Cho Airong district hospital. (Photo by Waedao Harai)

Both the Pattani car bomb and the Cho Airong raid took place in very specific political contexts. In the Feb 27 car-bomb attack the political objective of the day almost certainly related to the peace process involving the group of separatist factions known as Mara Patani which with Malaysian facilitation has come together to negotiate with the Thai government.

The initiative is one that the BRN's senior leadership has angrily and publicly disavowed issuing a rare communique reinforced by a media interview last October. Not by coincidence, the car-bomb attack occurred one day before a peace conference at Pattani University addressed through video presentations by the Malaysian facilitator, Ahmad Zamzamin Hashim, and Awang Jabat, a purported representative of the BRN. Similarly, the Cho Airong Hospital raid was intended to send a political message about a lot more than just the anniversary of BRN's founding in March 1960 -- an anniversary the BRN has never before "celebrated" with major attacks. The real message can be safely assumed to have related to one or both of two other issues.

Again, the Mara Patani process -- a red rag to the BRN bull -- was one. In this context the raid provided a pointed response to the Thai negotiation team's proposal that Cho Airong might be part of a violence-free "safety zone" aimed at confidence building. An armed attack through the district hospital spoke volumes for the prospects for any "safety" not agreed on by the insurgents themselves.

The other issue of the day was a public fund-raiser held six days later at the Jihad Witaya pondok (Islamic seminary) in Yaring district of Pattani following a court order last December authorising state seizure of the school's land for its alleged involvement in insurgency-related activity.

Attracting crowds of at least 40,000-50,000 from across the region, the day-long event was the largest public expression of Muslim dissatisfaction with state policy in decades.

It was also unquestionably seen by the BRN as a catalyst for anti-state political mobilisation, a type of struggle towards which the party now appears increasingly to be leaning.

The potent symbolism implicit in a loud but carefully calibrated display of military power in the run-up to a mass mobilisation of political dissent can hardly have been overlooked by BRN planners.

For the security forces the take-away is hardly comforting: the BRN is not only still a force to be reckoned with militarily, but one which is seeking to shape its tactics and strategy to the wider end of long-term political subversion.