Ethnic Karen forest dweller Kamthorn Srisuwanmala, 47, and other victims of the lead poisoning at Klity Lang, Kanchanaburi, arrived at the provincial court with high hopes. They left with heavy hearts.

The Supreme Court was scheduled to issue the final verdict in their court case against Lead Concentrates (Thailand), the mining company which released toxic waste water into their creek for decades, resulting in numerous deaths, illnesses and disabilities.

Since the First and Appeal courts already ruled in the Klity forest dwellers' favour, they were hopeful that their exhausting 13-year-long legal battles would finally be over. They were wrong.

To their huge disappointment, they were told to turn up again in June. The ruling was ready, but it could not be read because the defendants had still failed to put up an amount of money as legally required to ensure they would be present for the ruling.

It took one whole day for the Klity villagers to travel from their remote forest home to Kanchanaburi Court. It would take another day to go back. The journey is difficult and costly for the Karen peasants, but they have been enduring it stoically for the past decade, hoping for justice.

"We just have to tell ourselves to be patient," said Mr Kamthorn. "What else can we do?

When the lead poisoning tragedy at Klity Lang, a remote village in a national forest in Kanchachanaburi became public 18 years ago, the country was stunned.

The Klity creek, the village's only stream and heart of community life, contained more than 10,000 tonnes of lead-contaminated sediment. The sediment contains 165,720 to 552,380 ppm (parts per million) while Thailand's safety standard is 200 ppm.

Lead levels in the bloodstream of villagers and children are also dangerously high, enough to cause permanent damage to brain cells and the nervous system. It is no wonder that many children suffer from slow learning and mental disabilities.

In the wake of media spotlight, the government ordered the temporary closure of a lead separation plant which released toxic water into the Klity creek for several decades. The plant was fined 2,000 baht.

The plant, no longer able to resume operations due to local protests and public concerns, was eventually closed down, leaving Klity creek permanently polluted.

Meanwhile, the villagers' calls for the creek's clean-up and medical treatment for lead poisoning continued to fall on deaf ears, which led the forest dwellers to take their case to court in 2003 to ask for compensation, medical expenses and rehabilitation of the creek.

Mr Kamthorn has many burning questions. "The evidence is clear. The mine has polluted our creek and destroyed our health. Why doesn't the government prosecute the criminals?

"Our suffering is clear. The government can just give us medical treatment. Why does the government refuse to do so?

"We are poor villagers with few resources. Why do we have to shoulder the legal burden to sue the lead mining company ourselves? Why do we have to continue pressuring government officials to clean up our creeks when it is their duty?"

What is most hurtful for Mr Kamthorn and other Klity villagers is the total indifference of public health personnel to their illnesses.

Despite previous court rulings on lead poisoning caused by the lead mine, public health personnel refuse to give the villagers medical treatment; they don't even dare identify the villagers' illnesses as symptoms of lead poisoning.

"When doctors find we have malaria, they immediately give us medicine to treat us. But when they find dangerous levels of lead in our blood, they refuse to give us medical treatment. Why?"

Eighteen years after lead poisoning in Klity became known, the villagers remain only under "surveillance" by public health personnel. Once in a while, the villagers receive blood tests. "But they never tell us the results of our blood tests. And when we complain of illnesses, we receive only painkillers," he said.

Such indifference bordering on cruelty is mind-boggling. Once I followed a Klity toddler named Tukata to a hospital in Bangkok. Her head is oversized for her body and her blood contains a very high level of toxic lead.

A female doctor said Tukata's head size is normal. I wonder if she would have said the same thing if her own child had health problems similar to Tukata's.

The only physician who has the moral courage to support the Klity forest dwellers is Dr Orapan Methadilokkul, an occupational health expert. She not only testified in court, but also gave medical treatment to Mr Kamthorn and seven other villagers.

"We got better after the treatment. It's why we decided to take the lead mine to court. We want other villagers to receive medical treatment too," he said. 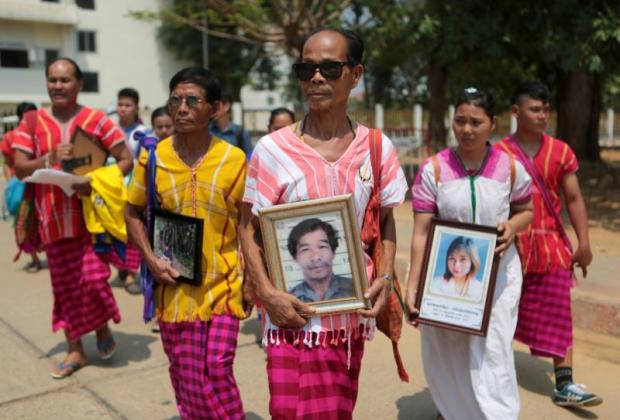 A group of ethnic Karen forest dwellers from Klity, Kanchanaburi, hold photos of villagers who died from lead poisoning before the Supreme Court Tuesday postponed its ruling on the case until June. Chanat Katanyu

Even if the final Supreme Court ruling in June is supportive of the Klity villagers' cause, experiences over the past decade have informed them not to be hopeful about change.

Three years ago, the Supreme Administrative Court ruled the Pollution Control Department guilty of negligence and ordered it to clean up the creek within three months. Nothing has happened to date.

Officials insist they want to do more studies, dragging out the clean-up game with impunity, while villagers complain they do not have any say in the PCD's clean-up project, if there even is one.

"The same problem might happen after the Supreme Court verdict," said Mr Kamthorn. The call for financial compensation may drag on for years because the owner of the lead mining company already died and the company folded as court procedures continue.

This is why Mr Kamthorn is against a draft mining law which already passed initial approval by the National Legislative Assembly. The law allows all areas with mineral deposits to be mined, including pristine forests.

The Department of Primary Industries and Mines (DPIM) has been lobbying for this environmentally destructive law for years. Past civilian governments failed to push it through due to fierce local resistance. This legal nightmare is set to become reality under this military regime.

Mr Kamthorn also disagrees with state concessions for more gold mines when past environmental and health disasters have not been addressed.

The father of four is at a loss why the system rewards the polluters by turning a blind eye to their crimes and punishes their victims by denying them justice. And why policymakers are determined to continue on the same destructive path despite the suffering on the ground.

"Look at what happened at Klity. Once you allow destructive industries to operate, the damage to nature and people's health is irreparable.

"It's better to prevent the environmental and health tragedies from taking place in the first place," he said.

"For when we choose to fight for legal justice, it will take years if not decades to prove and win our cases. The rich can use their money and legal games to prolong court procedures till the poor are exhausted.

"But after fighting this long, we won't give up easily. All we want is to make our home village safe again. And we don't want people elsewhere to suffer like us."