The CAC certifies companies after inspection of their business models. The group was founded in 2010 by the late Charnchai Charuvastr, then president and CEO of the Thai Institute of Directors Association (Thai IOD) and Dusit Nonthanakorn, who was chairman of the Thai Chamber of Commerce (TCC).

Last week was a golden opportunity for global anti-corruption movements and for Thailand's Private Sector Collective Action Coalition against Corruption (CAC) to engage in anti-corruption at a global level. Heads of state and leaders from business and civil society from around the globe gathered for the London Anti-Corruption Summit 2016 on May 12.

The event, sponsored by the UK government, aimed to orchestrate a synchronised path to eradicate corruption through concrete measures to expose it, penalise those committing or supporting it, protect those taking part in solving it, and wipe out existing corrupt cultures.

The summit grew from concerns over the growing dimension and severity of corruption world-wide. UK Prime Minister David Cameron rightly said corruption is the cancer at the heart of so many of our problems in the world today. It destroys jobs and holds back growth, costing the world economy billions of pounds every year. It steals from the poorest as corrupt governments siphon off funds and prevents hard-working people from getting the full benefits of growth that are rightfully theirs. It can even undermine our security. As Sarah Chayes argues in her essay, the perceived corruption of local governments makes people more susceptible to the poisonous ideology of extremists.

The recent release of the so-called "Panama Papers" is another demonstration of how the international financial system has been abused and how a gigantic non-transparent business has evolved, with potential linkages between politicians and businessmen in shady deals of companies established in tax havens. The leaked information also reveals money trails and the roles of financial institutions in facilitating dubious transactions.

Corruption and corporate secrecy damage business and are a tremendous drain on global development -- squandering resources which could have otherwise been used to build schools, health clinics, roads and bridges or to deliver vital social services. Instead, corrupt people illegally squirrel away public resources for their own benefit and use proxy companies to hide assets or launder through various investments.

To this end, leaders from business and civil society around the world, through the initiative of the British government, jointly issued the Leader's Anti-Corruption Manifesto at last week's summit. The manifesto was co-signed by leaders of 41 organisations, including the CAC, putting forward clear proposals to the heads of state to fight corruption by taking the following steps:

Firstly, governments should establish public beneficial ownership transparency over companies and close down corporate secrecy which is a tool for the corrupt.

Secondly, governments should establish a more level playing field in business markets and open up government contracting so that citizens and business can follow a clear public record of how their money was spent.

Thirdly, governments should end impunity for the corrupt who escape justice for their actions in their own countries and they should take concrete steps to support whistleblowers who stand up against graft.

It is clear that governments have direct roles and duties to support and lead in the fight against corruption. Without seriously committed leadership and determination, effective solutions to corruption will not be possible, while weak law enforcement will make the task even more difficult. 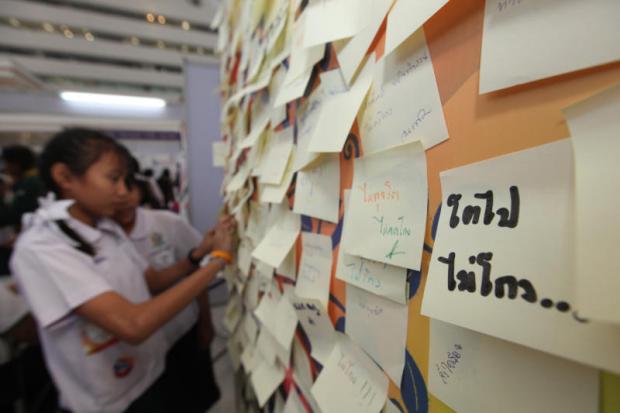 A student writes on a piece of paper in support of rooting out graft, at an event organised by the National Anti-Corruption Commission last year. WICHAN CHAROENKIATPAKUL

Economically, corruption distorts markets and adds hidden costs to production. It prevents fair competition and innovation, while weak rule of law deters investment. By contrast, greater business transparency will reduce corruption risks and costs while enhancing investors' confidence, encouraging investment and competition. Opening up government contracting will also reduce opportunities for corruption and ensure fairer competition for large-scale projects and government procurement. Transparency will help investors and analysts better assess the risk, save taxpayers' money, and enhance quality of goods or services procured by the state.

The invitation to the CAC to join the manifesto at the summit indicates acceptance of the CAC's anti-corruption roles and works internationally. Also at this special event, the CAC issued its own statement that was published and distributed at last week's summit. The key messages from the CAC statement are as follows:

Firstly, the fight against graft cannot be won without strong commitment and determination from governments to take the lead and set an example from the top. Governments must also do business or have financial transactions only with firms that have clear anti-corruption policies and strong compliance procedures in place.

With regard to services that governments provide to the citizen such as the issuance of licences and other official documents, governments should adopt full transparency on such processes with a clear timeline, documents required, and the fee involved. Any deviation from the specified timeline and conditions is subject to scrutiny for corruption by law.

The battle between small-time traders and hedge funds that has shaken US and European stock markets moved into Asia on Thursday, with surges in several Australian companies joining a list of social-media hyped moves that have cost financial institutions billions of dollars.

Anyone can register to grow, trade and have in possession hemp under a new ministerial regulation coming into effect on Friday.

MANILA: According to one rumour circulating in the Philippines, the coronavirus vaccine will allow President Rodrigo Duterte to kill people at the push of a button.