WHO bets on Rio Games
Opinion

WHO bets on Rio Games

Lara, a 3-month-old baby born with microcephaly, is examined at a Brazilian hospital. It is strongly believed, but not yet absolutely proved, that the Zika virus is responsible for terrible damage to unborn children when their mothers contract the disease - in particular microcephaly. (AP photo)

The World Health Organization is causing many to be concerned about the Zika virus. In many places, including Thailand, the WHO seems to be acting perilously. About a month ago, the world health authority announced it was dropping Thailand from its worldwide alert, because there were no new reported Zika cases. Two weeks later, a Thai man entering Taiwan was diagnosed with the virus. On Sunday, health authorities declared a "Zika virus alert" after finding another infected man in Udon Thani's Sang Khom district.

While the WHO has declared Thailand "Zika free" -- not merely prematurely, but falsely as many had warned -- other agencies have openly disagreed. Last week, Australia's Department of Foreign Affairs and Trade added Thailand to the list of 35 countries it advised pregnant women to bypass because of the risk of Zika infection. The European Centre for Disease Prevention and Control put Thailand and Vietnam on its Zika transmission map.

The US Centers for Disease Control and Prevention has been especially active in monitoring the virus. Last week, US professional baseball teams cancelled two games scheduled to be played in Puerto Rico over fears of Zika infections. Zika cases have been confirmed in the US. Because of the fear that the virus can severely affect a foetus, it is vital to keep track of Zika.

In the face of such strong concern around the world, it is difficult to understand the WHO's stance. The agency has downplayed the dangers of Zika, even after a troubling last week. The WHO received letters from nearly 200 distinguished figures, must coming from the fields of science and medicine, requesting the organisation to lend its support to cancelling or moving the 2016 Olympic Games from Rio de Janeiro "in the name of public health". While absolute proof is still lacking, it is scientific consensus that Brazil is the centre of Zika-infected mosquitoes, and of the disease's spread. 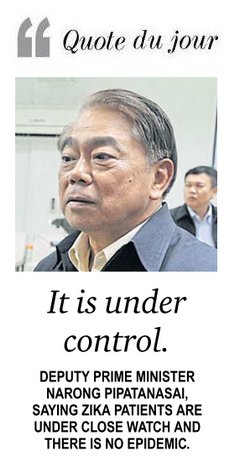 The WHO treatment of the request was cavalier, and its reasons for dismissing the letters were troubling. The agency claimed there was no public-health justification for postponing or cancelling the Games. But of course there is. Many countries have already issued warnings against travel to the Rio Olympics, which are scheduled to begin on Aug 5. And the fears extend well beyond pregnant women. In addition to foetal brain damage, the Zika virus is also being associated with the Guillain-Barre syndrome, a (so far) uncommon immune system disorder.

But if the WHO was dismissive of the call to cancel the Olympic Games, its high-handed treatment of those who signed the letter was appalling. The signatories were waved off as if they were uninformed juveniles. "Two thirds", a WHO spokesperson sneered, "are neither medical professionals nor clinical disease experts." Singled out for abuse, along with three other signatories, was Ananya Tritipthumrongchok, who is the general manager of the International Peace and Development Ethics Centre.

This point of the letter flew over the head of the WHO. Signatories represented a wide swath of expertise -- public health, paediatrics and bioethics, as was the case with Ms Ananya.

The elephant in this possibly unsafe room is an agreement that the WHO signed in 2010 to work with the International Olympic Committee. The IOC, of course, wants the Games to go ahead, no matter what the cost. It should deeply disturb everyone that this question of IOC-WHO "cooperation" is hardly ever raised. WHO actions over the spread of Zika seem to go against medical advice.