A computer repairman, believed to be under the influence of drugs, stole two cars, shot and killed a policeman and a taxi driver, took a doctor hostage and shot and wounded several police before finally being killed by police fire in Bangkok. Thada Inthamas, 37, commandeered a Toyota Camry from Nonthaburi, stabbed, shot and killed traffic policeman Likasit Pilasri of Dusit police station. He stole another Toyota Camry and took hostage the owner, Dr Pipatra Sailohit, 28, a doctor at Suranaree Army Camp Hospital. He also shot and killed a taxi driver who tried to stop him.Thada opened fire, injuring several police. Police fired back at the car, killing Thada and seriously wounding the doctor who was taken to Rajavithi Hospital. Photos by Post Photographers 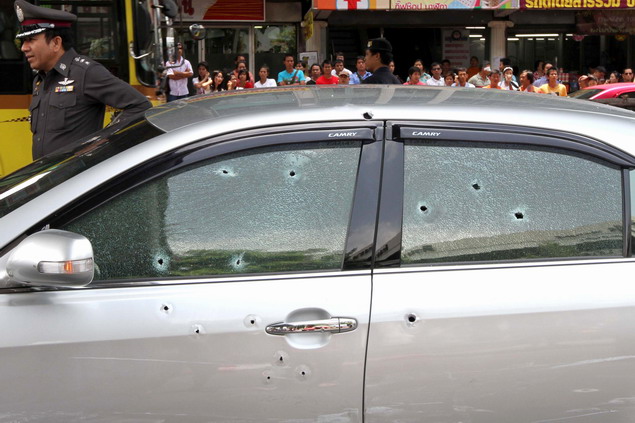 A bullet-riddled Toyota Camry. Police fired at the car to stop Thada. Photo by Apichart Jinakul 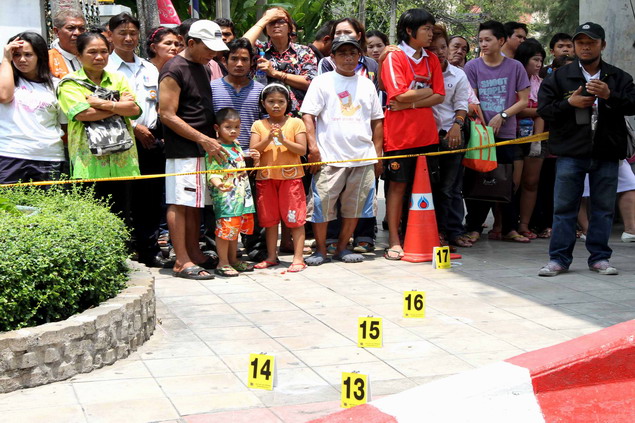 Police mapped out the spots where the bullet shells from the shootout were found near Phaya Thai Road. Photo by Apichart Jinakul

Forensic science officers take a close look at the car.Photo by Apichart Jinakul

People watch the scene from a footbridge above. Photo by Apichart Jinakul

The family of Snr Pol Sgt Likasit Pilasri, of Dusit police station, cries after they witness his body at the hospital.

Police gather details of the taxi involved in the shootout. Thada shot the driver when he tried to stop his car being taken.Photo by Prikit Jantawong

Pol Snr Sgt Maj Jirote Boonthongkam, a Phaya Thai traffic policeman, is in critical condition after he tried to stop Thada near the Si Ayutthaya intersection.