An increase in the price index for vacant land near the extension of the northern section of the Green Line from Ku Kot to Lam Luk Ka, and along the Pink Line from Kae Rai to Min Buri, exceeded the average for Greater Bangkok for four consecutive quarters.

"Construction of the Green Line from Ku Kot to Lam Luk Ka has not started yet, but prices of vacant land along this section jumped 61.3% in the first quarter this year," said Vichai Viratkapan, acting director-general of the Real Estate Information Center (REIC).

The price of land near this line also saw the highest year-on-year increase.

The remaining stations are scheduled to open by the end of 2020. 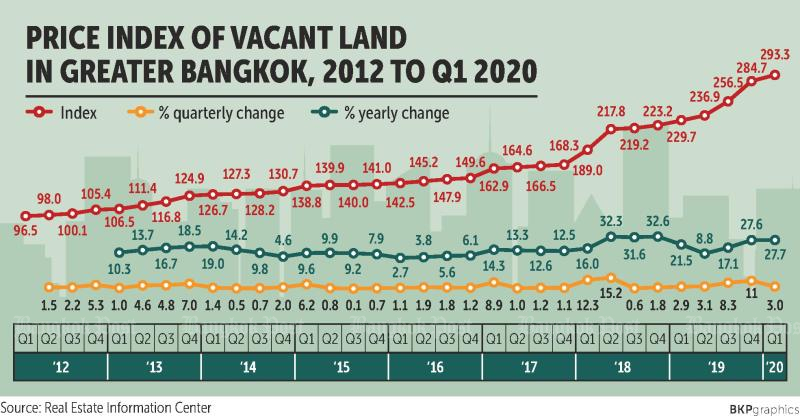 Locations along the extension from Ku Kot to Lam Luk Ka also saw the highest year-on-year increase for four consecutive quarters since the second quarter of 2019 at 33.5%, 39.7%, 66% and 61.3%, respectively.

This location ranked among the top five highest increases since the first quarter of 2019, a period when it was ranked third with a rise of 38.7%, while the average increase in the price index at that time was 21.5%.

The Pink Line from Kae Rai to Min Buri has construction 55% completed as of March 2020. The price index for vacant land there in the first quarter of 2020 was up 45.1%.

The Kae Rai-Min Buri location emerged among the top five from the second quarter of 2019, when it had the fourth highest increase, before jumping to No.2 from the third quarter of 2019 to the first quarter this year.

Areas adjacent to mass transit lines also took the rest of the top five spots for year-on-year increases in the price index for vacant land.

The third highest increase in the first quarter of 2020 was the Light Red Line from Taling Chan to Sala Ya, up 20%. Bidding for this line is scheduled for June.

Fourth was along the Blue Line extension from Bang Kae to Phutthamonthon Sai 4, slated to start bidding next year. This location saw a rise of 15.3%.

Fifth was the extension of the Green Line from Bearing to Samut Prakan, with plans to continue to Bang Pu. This location tallied an increase of 11.7%.

Land transferred to or by companies at the Lands Department were used, as most companies quote actual prices.