Despite a new wave of Covid-19 cases in Thailand, Chinese buyers are prepared to purchase Thai properties in the second half of 2021, driven by the expectation of a distribution of vaccines and the reopening of inbound tourism. 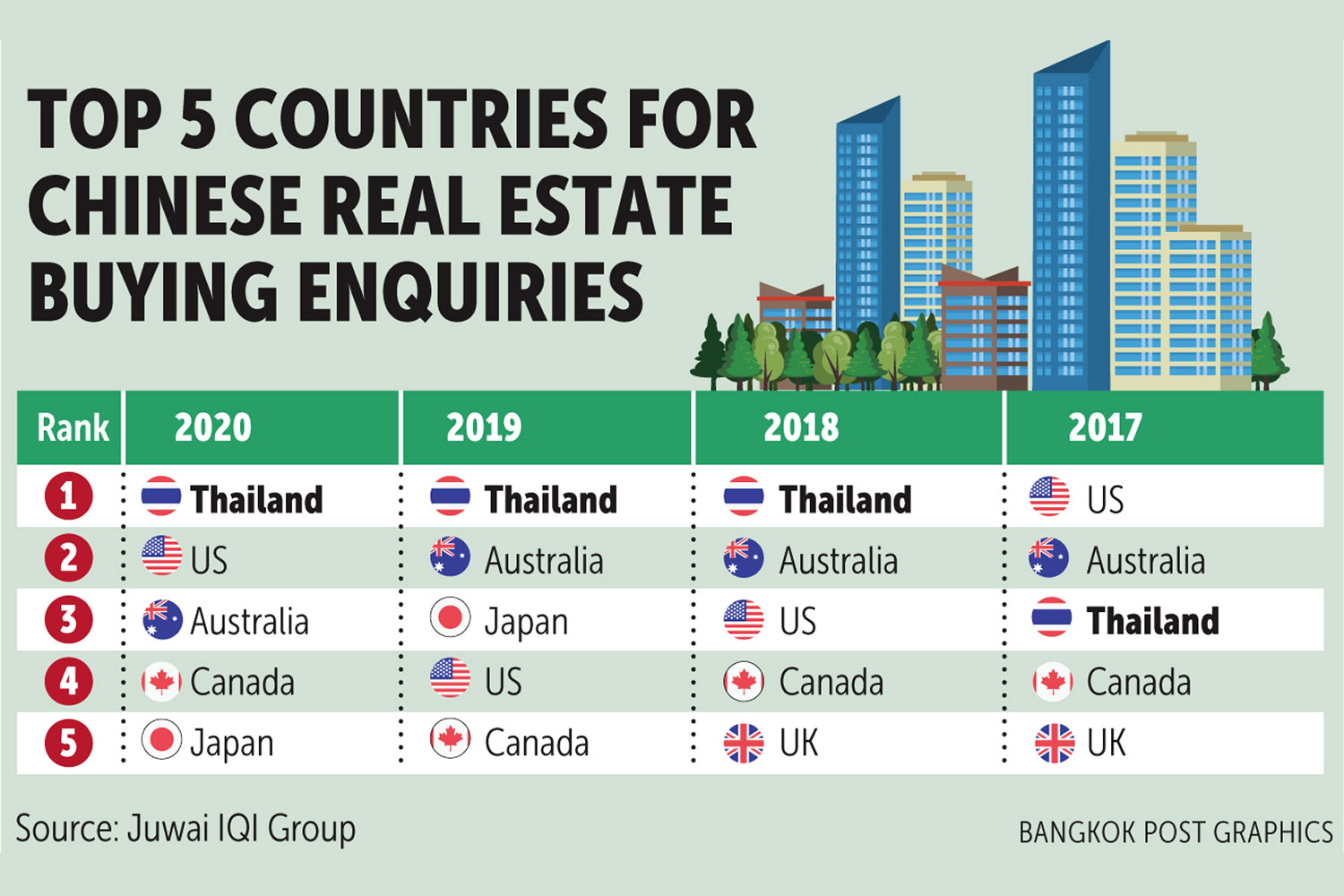 "We don't think the recent wave [of Covid-19 infections] will delay the reopening of the economy or recovery of foreign real estate investment," he said.

"What's probably more important is when Thais and foreign nationals who wish to travel here can be vaccinated. The sooner vaccinations are obtained, the quicker life can go back to normal."

Juwai IQI forecast the Thai economy would begin reopening to large-scale international travel in the second half of 2021 if the vaccination regime is not delayed, said Mr Ansari.

"The Thai property market will rebound spectacularly when mass tourism resumes. Travel will bring tourists back, which will support economic growth and employment, helping boost local buyer demand," he said.

It will also bring greater numbers of offshore buyers who are eager to make up for lost time.

Last year, the top five countries where Chinese property buyers made the most enquiries were Thailand, followed by the US, Australia, Canada, and Japan. In 2019, Thailand also led the way, followed by Australia, Japan, the US and Canada, respectively.

While enquiries in Thailand were down substantially from the extremely high levels they reached in 2019, it held the leading position for Chinese property buyers considering purchasing property overseas.

"Chinese and other foreign buyers consider Thailand to be an affordable destination with a high-quality lifestyle. They believe the EEC and high-speed rail will help contribute to strong economic growth and real-estate price growth in the 2020s," Mr Ansari said.

He said international buyers, and particularly Chinese buyers, wanted to resume purchasing Thai properties as the Thai government had taken some critical steps to support the property market.

"Offering long-term residency visas in exchange for property investment [of at least 10 million baht] was a smart step," he said.

Three luxury condo projects had already signed up with Thailand Privilege Card (the operator of Thailand Elite Card), with about 200 sales expected. That would result in some two billion baht in investment into the country.

He said if 30 additional developers that expressed interest also signed up and sold a proportionate number of units under the plan, it would increase investment significantly. With 33 developers signed up, the group estimated a total of 2,200 sales under the program and a total investment of at least 22 billion baht.

"Other ideas have been proposed by the Finance Ministry and industry groups. The government should offer residency for a shorter period for investment in lower-priced units of as low as US$100,000," he said.

He suggested the government raise a quota on foreign condo ownership in buildings in selected areas from 49% to as high as 70% and extend a leasehold period for low-rise houses from 30 years to a longer period.