Residential developers should be more careful in terms of unveiling new launches this year as their plans represent the highest level recorded in more than a decade, while unsold inventory could exceed 1 trillion baht, leading to a high level of risk, according to Asia Plus Securities. 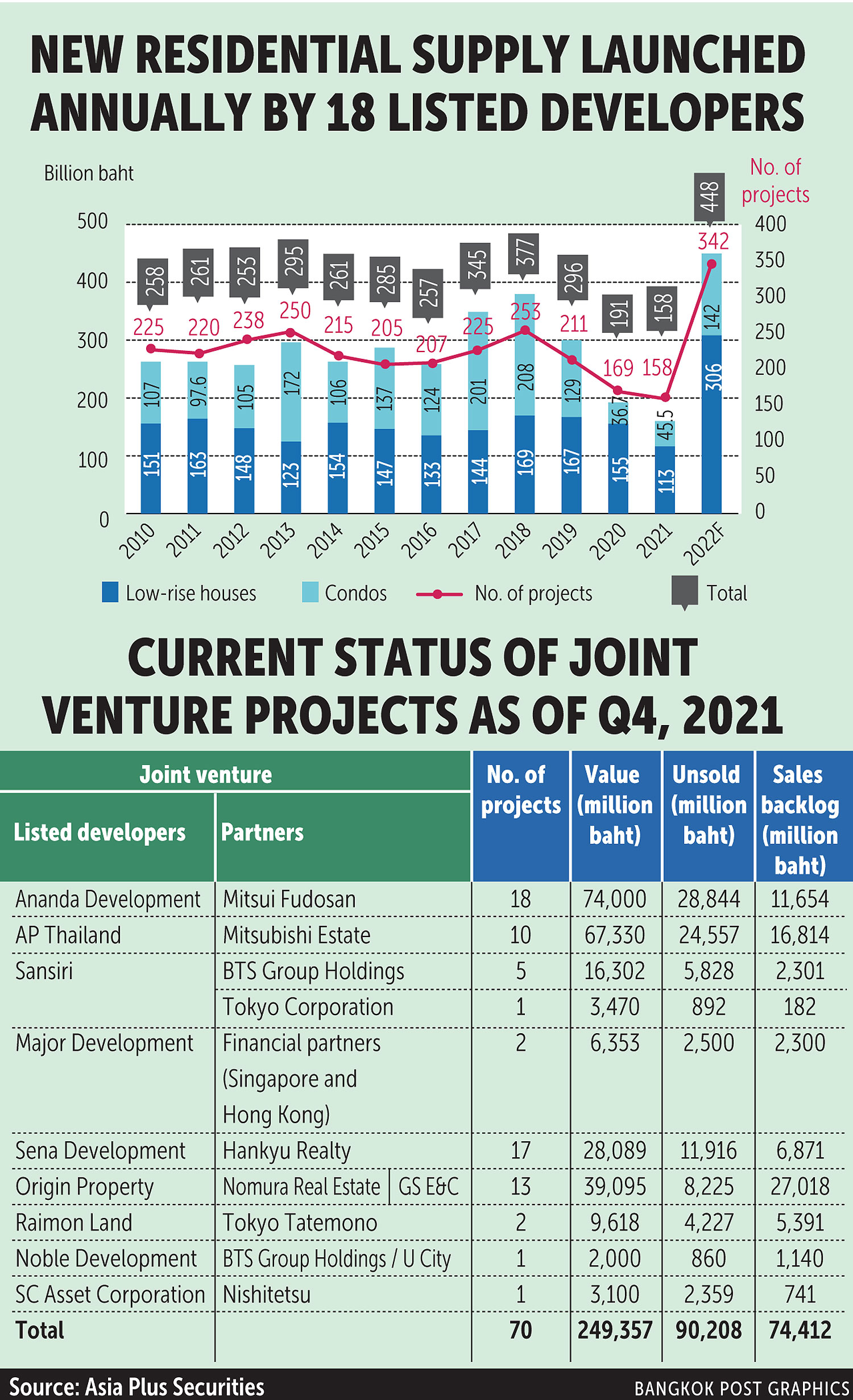 Therdsak Thaveetheerathum, deputy director of the research division, said 342 projects worth a total of nearly 448 billion baht of new residential supply are scheduled to be launched in 2022, derived from 18 listed developers.

When combined with ongoing projects under development, which had unsold inventory worth a total of 557 billion baht from 14 listed firms as of the end of 2021, the amount of available supply would exceed 1 trillion baht for the first time in history.

"Supply will be too great, even though purchasing power still remains in the market," he said. "Developers should be wary as demand will be not as high as in 2018."

In 2018, the 18 listed developers had combined presales of 354 billion baht, the highest level ever recorded. Three years later, presales fell to around 250-260 billion baht per year.

Estimating this year's new launches, Asia Plus Securities expects combined presales in 2022 to pass the 300-billion-baht threshold again at 319 billion, up 22% from 262 billion last year.

"There are a lot of uncertainties today which will disrupt demand," said Mr Therdsak.

"After the Russia-Ukraine conflict eases, there may be a new world balance and it depends on how well each country will be able to adjust."

Global and Thai GDP should be downgraded under these circumstances, he said last week at a property seminar held by the Real Estate Information Center.

Fortunately, the 18 listed developers' debts remained low, with a net gearing ratio of 0.9 times on average as of the end of last year, said Mr Therdsak.

The majority of new launches this year, some 70-80%, are low-rise houses, which can easily be stopped and restarted or divided into phases, he said. This is unlike condos, which must be finished once construction starts, said Mr Therdsak.

He said developers' shift to the low-rise housing sector began in 2019 when 57% of new supply comprised this segment, while condos accounted for 43%, compared with ratios of 45% and 55%, respectively, in 2018.

Newly launched condo supply was significant in 2017-18 as the value of total launches exceeded 200 billion baht per year, compared with an average of 121 billion per year during 2010-2016.

As of the end of last year, the unsold completed condo supply of 14 listed developers stood at around 111 billion baht, down from 114 billion in 2020 due to fewer new launches.