Residential developers should revise down unit sizes and adjust some features to keep housing prices flat, to accommodate sluggish purchasing power after prices were pushed up by higher costs caused by the impact of the Russia-Ukraine war.

Developers will also be more cautious about land purchases to avoid incurring higher costs from a new tax.

Issara Boonyoung, honorary president of the Housing Business Association, said home construction costs would rise by 5-10%, particularly for residential units for which the portion of construction cost was higher than land.

"Inflation and the sluggish economy will cause a decrease in home purchasing power," he said. "While costs increase, developers may be unable to raise housing prices as homebuyers may not be able to afford a unit as their purchasing power has stayed the same or decreased."

To keep housing prices flat, developers should downsize units from 18 square wah to 16 sq w for a townhouse or shift to duplex houses instead of single detached houses, Mr Issara said.

Atip Bijanonda, vice-chairman of the Board of Trade of Thailand, said low-rise housing developers should adjust products to reduce costs, for example, cutting unnecessary features or using design solutions. 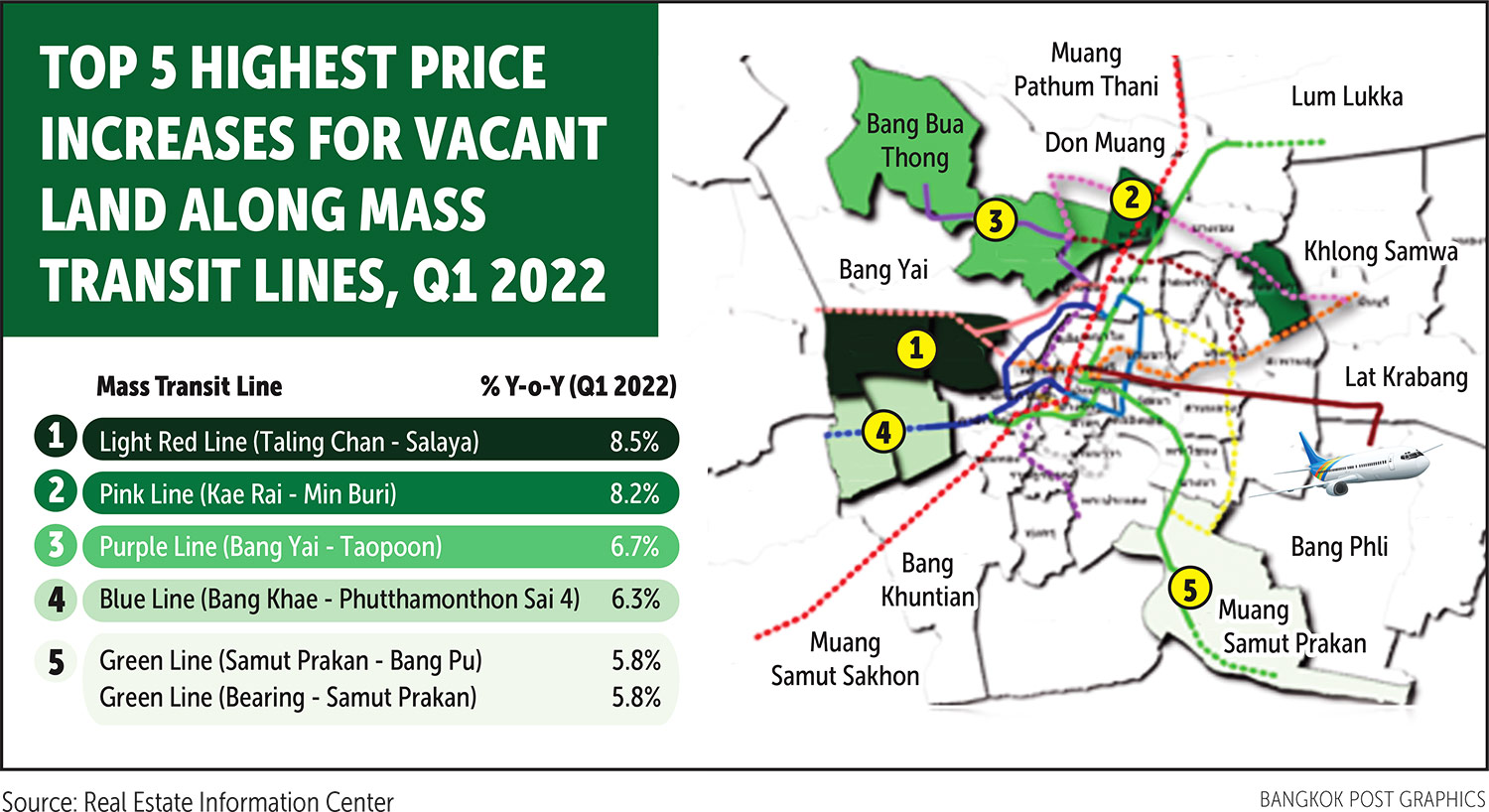 "Some functions or features that incur too high costs should be replaced with choices which will not affect homebuyers' usage," he said.

He said completed, ready-to-transfer condo units would face no impact from the rising costs as their costs were from the period before higher inflation kicked in.

But for condo projects under construction, developers may reduce their profit margin to keep sales prices flat to drain their stocks.

"Higher costs are mainly derived from global inflation," he said. "If the war is prolonged, housing prices cannot avoid an increase."

Vichai Viratkapan, acting director-general of the Real Estate Information Center (REIC), said prices of vacant land had been rising more slowly for a period of over two years due to the economic slowdown caused by the pandemic.

"The situation got worse with the Russia-Ukraine war. The Thai economy will likely have a lower growth than expected which will have an impact on home purchasing power," he said. 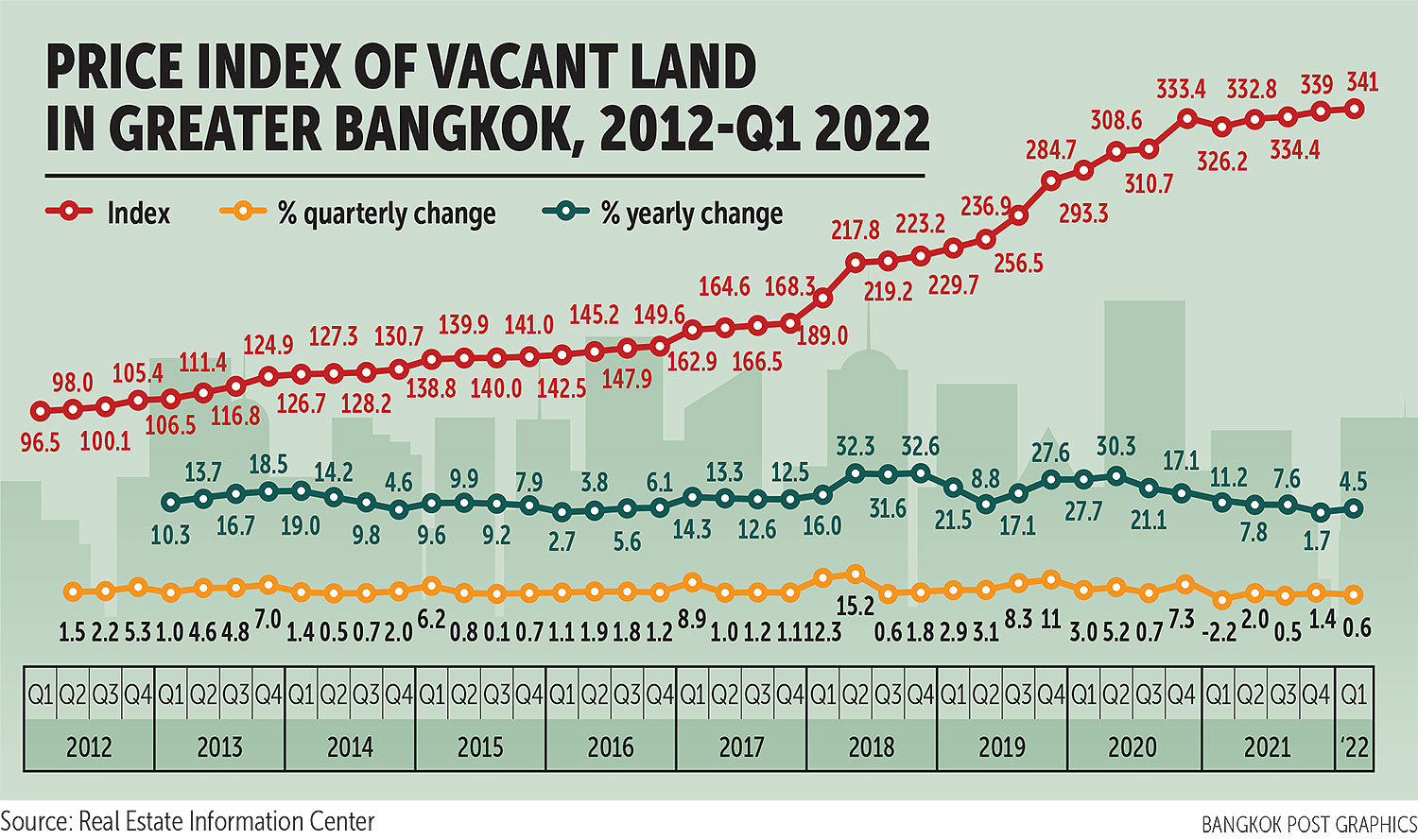 Over the past two years, many developers froze new project launches and slowed down land purchases.

A discount in the land and building tax in 2020-21 has not been extended this year, as a result, developers will be more cautious about purchasing land to control costs incurred from the tax.

According to the REIC, the price index of vacant land in Greater Bangkok from the second quarter of 2020 to the first quarter this year had a quarterly rise of only 1.93% on average, compared with 4.1% during 2015-19.

The index experienced the highest increase in 2018 when the government invested in many new mass transit lines in Greater Bangkok such as the Yellow, Pink and Orange lines, said Mr Vichai.

The increase eased in the second quarter of 2019 after lending curbs were announced during that period.

The land price index soared again during the third quarter of 2019 until the first quarter of 2020 before slowing down due to the pandemic.

The top five locations where the land price index rose were in areas where new mass transit lines are slated to be built.

BEIJING: Chinese regulators have approved the country’s first domestically produced large passenger jet, with Beijing hoping the plane will challenge foreign models such as the Boeing 737 Max and Airbus A320.