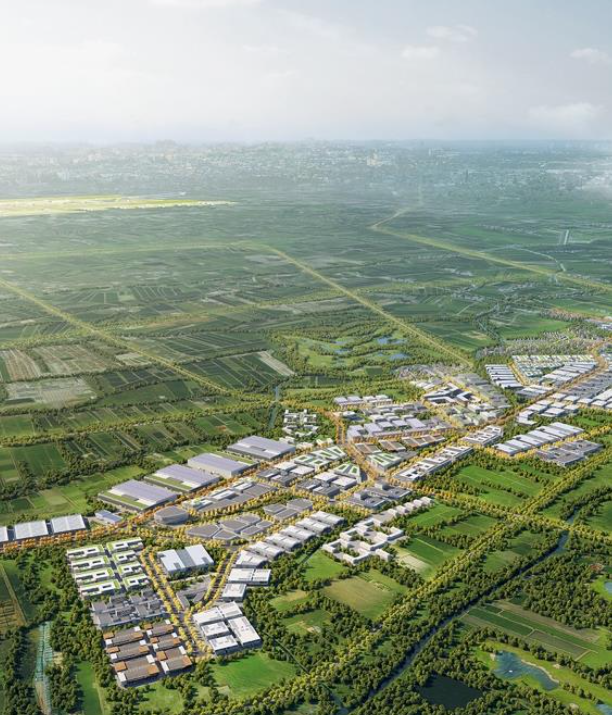 An artist's rendition of an industrial township project on a 4,700-rai plot on Bang Na-Trat KM32 in Bang Bo, Samut Prakan.

Sopon Racharaksa, chief executive of FPIT, said this year and next would be "exciting" years for the industrial estate sector as other countries outside China would significantly benefit from the China Plus One policy, which calls for businesses to diversify operations by adding locations in Asia.

"Both Chinese and foreign investors that have factories in China are looking for additional locations outside the mainland to set up new factories, not for relocation but rather expansion, before scaling down the existing ones in China," he said.

The first sectors expected to venture out, as they will be greatly affected by tax barriers, are technology and electronics businesses, said Mr Sopon. He said they are expected to opt for Thailand, Malaysia or Vietnam.

Mr Sopon said Vietnam has a large manufacturing base for IT businesses and is building an IT-related supply chain, resulting in investment from mobile phone producer Samsung and technology manufacturer Foxconn.

"Thailand can benefit from the first wave with its skilled labour and new S-curve industries that can support smart products such as smart electric appliances," he said. "For Malaysia, the focus is highly skilled employment."

Investors that want a manufacturing-based relocation are looking for attractive promotions and packages from governments because relocation can be costly, said Mr Sopon.

"Potential destinations should have political and economic stability to entice relocation investors," he said. "Countries like Thailand, Vietnam, Malaysia and Indonesia are neutral enough and don't take sides in disputes between China and the West."

To capitalise on this potential demand, FPIT plans to spend 3 billion baht to develop a total of 150,000 sq m in three locations, including Samut Prakan's Bang Phli district, where it has 100 rai near a drainage canal.

In Ayutthaya's Wang Noi district, the firm has 500-600 rai remaining for the development of distribution and logistics centres, and 300-400 rai allotted for factories.

In the Eastern Economic Corridor provinces, FPIT has a total of 500-600 rai.

The plots in the three locations are sufficient for development over the next couple of years, said Mr Sopon.

He said the company and partners were constructing infrastructure, roads and utilities in the 1,500-rai first phase of a new industrial-led township joint venture project.

"The first phase, with an investment of 4 billion baht for a five-year development span, will have infrastructure and roads completed by the end of 2023," said Mr Sopon. "Around 100,000 sq m of space will be ready for rent in 2024."

He said the plan called for industrial spaces initially because the land is located in an industrial zone. Business activities should follow, with residential development last.

The industrial-led township joint venture is on a 4,700-rai plot on Bang Na-Trat KM32 in Samut Prakan's Bang Bo district. It is owned by TRA Land Development Co, in which Frasers Property Thailand Plc, the parent firm of FPIT, holds a 50% stake, while Rojana Industrial Park Plc and Asia Industrial Estate Co hold 25% each.

TRA acquired a 4,315-rai plot through an auction in 2018, paying around 8.91 billion baht before also buying surrounding plots.

In Vietnam and Indonesia, FPIT plans to spend 2 billion baht to develop spaces totalling 100,000 sq m this year, which will comprise ready-built factories in Vietnam, and warehouses and built-to-suit spaces in Indonesia, said Mr Sopon. FPIT has plots spanning 300 rai in Vietnam for future development and will talk to local partners about buying more land as demand for industrial space is strong, he said.