An aerial view of buildings in Bangkok. (Photo: Arnun Chonmahatrakool)

Higher interest rates and the end of property measures weakened housing developer sentiment, while the comeback of Chinese tourists boosted confidence, according to the Real Estate Information Center (REIC).

Vichai Viratkapan, the centre's acting director-general, said housing developers in the fourth quarter last year had greater concerns over the impact of higher interest rates on their business.

"Their sentiment on performance, sales, employment and new launches dropped 1.7-2.3 points after the announcement of interest rate increases in late September and November 2022," he said.

However, their sentiment on investment and development costs rose 1.8 and 4.4 points, respectively. This reflected their confidence in housing development in 2023.

According to the REIC, the current situation index of housing developers in Greater Bangkok in the fourth quarter of 2022 dropped slightly to 51.5 from 51.8 in the third quarter, which rose from 47.1 and 49.8 in the first and second quarters respectively.

The lowest index was sentiment on development costs at 33.0, though this is up from 23.6 and 28.6 in the second and third quarters, attributed to the start of the Ukraine-Russia war early last year.

Listed developers' current situation index for the quarter dropped to 55.2 from 58.0 in the third quarter, while that of non-listed firms picked up from 42.6 to 46.0.

"The current situation index for non-listed firms increased for every issue as their concerns gradually eased, though it was still lower than the median of 50," said Mr Vichai. 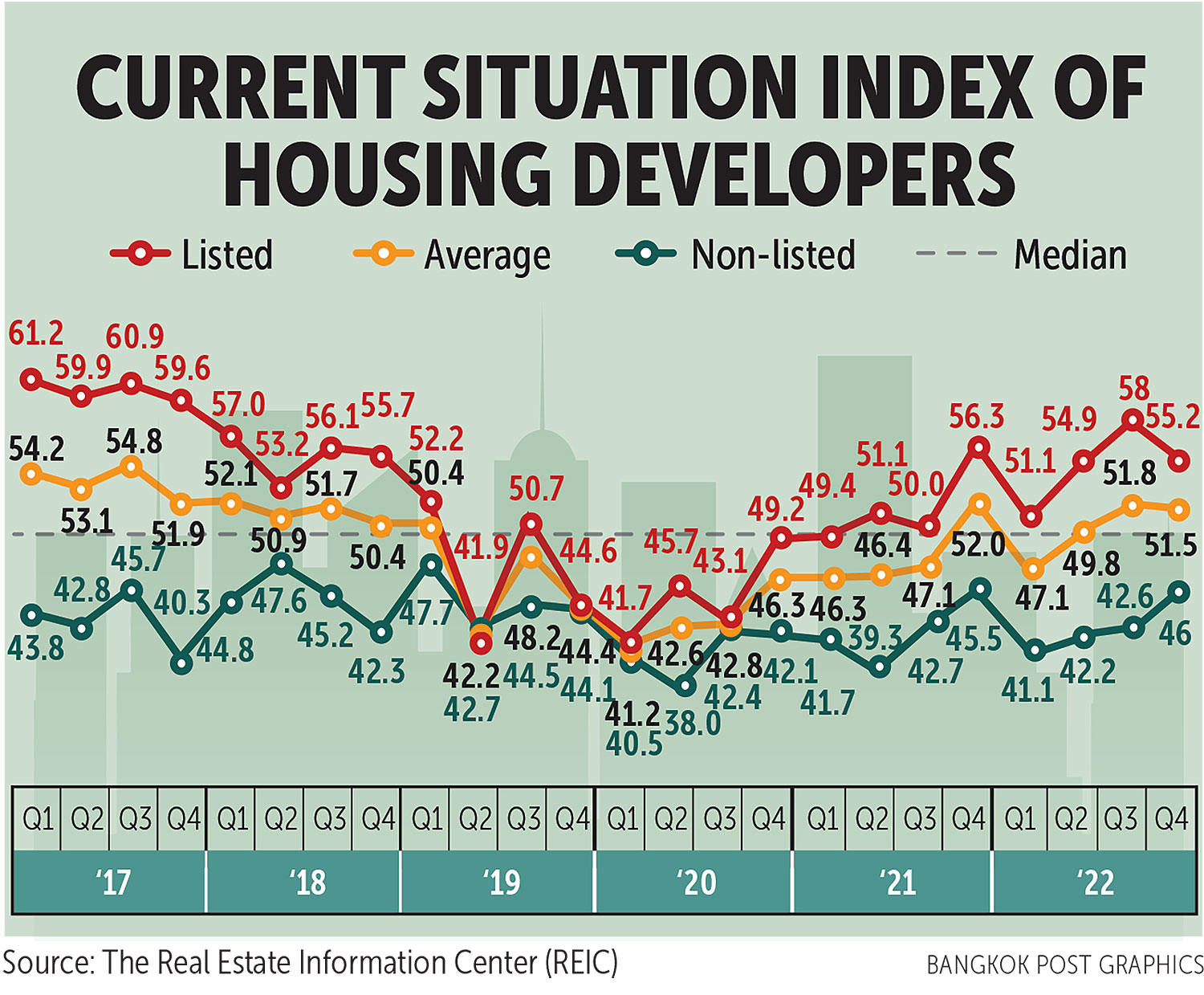 Chaiyan Chakarakul, board chairman of Lalin Property Plc, said competition in the housing market this year would continue to rise as developers are more confident about tourism.

"The number of foreign arrivals in November and December last year was positive. The relaxation of China's Covid policy last weekend can boost the Thai economy this year," he said.

REIC also reported the expectations index for the next six months improved to 60.5 in the fourth quarter of 2022 from 57.9 in the third quarter.

Sentiment about the future of investment, employment, development costs and new launches rose because of the economic recovery, but the index for performance and sales dropped due largely to the end of incentives, said Mr Vichai. The easing of loan-to-value limits expired on Dec 31, 2022, as well as the cut of transfer and mortgage fees from 2% and 1%, respectively, to 0.01% each, with the former rising to a cut of 1%.