ALGHERO (ITALY) - Triple world champion Sebastien Ogier seized the early lead at the Rally of Sardinia on Thursday as the Volkswagen driver won the opening super special at Alghero. 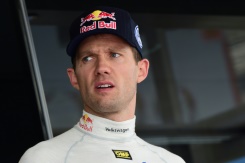 French driver Sebastien Ogier is pictured on the first day of the 2016 FIA World Rally Championship in Sardegna on June 9, 2016, in Alghero

The Frenchman completed the 2km course in 2min 0.4sec to edge out Estonia's Ott Tanak in a Ford Fiesta who along with Finland's Jari-Matti Latvala is just 0.3sec adrift.

Ogier admitted earlier in the day that he may not complete this weekend's race and even has a private plane waiting to whisk him away to his pregnant wife, television presenter Andrea Kaiser go into labour.

Their first child is due some time between the Italian race and the next one in Poland from July 1-3.

For Friday's first day there are more than 100km over eight specials with large crowds and fierce sun expected on the dry, dusty roads.

Ogier won the first two rallies of the season but has failed to climb the top step of the podium in three since then.

Yet the three-time world champion has nonetheless extended his lead over that period and has a comfortable 47-point gap to Norwegian Andreas Mikkelsen in the standings.

YANGON: Two women, one pregnant, were killed and seven other people injured after Myanmar troops shelled a Rohingya village on Saturday, according to a lawmaker and a villager, two days after the UN’s highest court ordered the country to protect the minority.

Hong Kong on Saturday declared the outbreak of the Wuhan coronavirus an “emergency” — the city’s highest warning tier — and cancelled all official Chinese New Year celebrations.