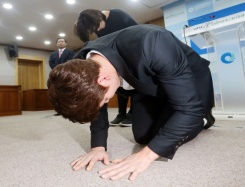 South Korean swimmer Park Tae-Hwan makes a formal deep bow to express his regret for his doping during a press conference in Incheon, west of Seoul, on May 2, 2016

The multiple Olympic medallist completed an 18-month drug suspension in April after testing positive for an anabolic steroid in out-of-competition controls before the 2014 Asian Games.

But he remains barred from competing in Rio de Janeiro under a rule of the Korean Olympic Committee (KOC) that prohibits athletes from representing the country for three years after the expiration of any doping ban.

"The spirit of this protocol is to make sure that national athletes be armed with high morality.

"Doping runs against the spirit of fair play and it must be sternly dealt with, especially for the sake of educating young athletes," Han said.

The KOC said it would inform the international Court of Arbitration for Sport (CAS) of its decision and would respond to any subsequent mediation efforts.

Park has argued that the KOC regulation is unfair and he filed an appeal with the CAS back in April.

In the meantime he has begged for a chance to compete in what would be his third, and almost certainly last, Olympics -- at one point getting down on his hands and knees during a press conference.

The 26-year-old was once the poster-boy of South Korean swimming -- courted by advertisers and idolised by fans.

His positive doping test was only revealed in January last year, and was initially blamed by Park's management team on the incompetence of a doctor at the hospital where the swimmer was receiving treatment.