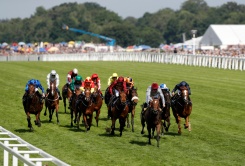 The monarch -- for whom Dartmouth was the final chance of a win as her other runners in the most prestigious race meeting in England had failed to find royal favour -- made the last of her previous 22 visits as a winning owner when Estimate won an epic Ascot Gold Cup in 2013.

She greeted the victory with a grin of delight alongside her racing manager John Warren in the Royal Box but then had to survive a stewards enquiry for possible interference with Irish raider Highland Reel.

However, Dartmouth's French jockey Olivier Peslier -- who had pinned the Queen's silks together at the neck with his trademark lucky butterfly brooch -- persuaded the stewards there was no case to disqualify him.

"This is the Olympics to even have a horse run here let alone win is fantastic," said Warren, after the Queen had stepped up to receive the trophy from her granddaughter Princess Beatrice.

"This means a lot to the Queen. Halfway through the race the Queen turned to me and said 'things are going well' although that final furlong was a tough one to endure!" he added.

For Michael Stoute it was also a landmark victory as not only was it his 10th win in the race -- seventh in the last 11 renewals -- but he equalled his late great rival Henry Cecil's modern day post World War II record of 75 winners at the Royal meeting.

The 70-year-old Barbados-born handler -- who had paid handsome tribute to Cecil when he pulled to within one of him on Friday -- took it all in his stride.

"That's great well I hope I don't stop there," he said.