US swimmers 'not confident' of clean Rio Olympics
Sports

US swimmers 'not confident' of clean Rio Olympics

OMAHA (UNITED STATES) - The doping scandal engulfing Russian athletics and suggestions it could also taint the country's swimmers were on the minds of US swimmers as they prepared Friday for the start of their Olympic trials. 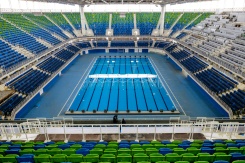 General view of the Olympic Aquatics Stadium at the Olympic Park which will host the swimming events during Rio 2016 Olympic Games in Rio de Janeiro, Brazil, on June 7, 2016

Two-time Olympic medallist Elizabeth Beisel said she was "definitely not" confident of a level playing field in Rio.

"Just the talk, the rumors, speculation, just knowing people from around the world and other countries and hearing stuff," she said. "It's always going to be in the back of your mind."

FINA, swimming's world governing body, said this month they would investigate "very serious allegations" made in a joint newspaper probe by The Times in Britain and Frankfurter Allgemeine in Germany which alleged that two men at the center of the athletics doping allegations were said to have offered to exempt Russian swimmers from drug testing in return for an annual fee.

FINA is also grappling with the case of breaststroke world champion Yulia Efimova, who is among dozens of Russians to test positive for meldonium since it was banned as of January.

FINA lifted Efimova's suspension as the World Anti-Doping Agency continues to study how long it takes for meldonium to leave the body.

That could allow her to swim in Rio, even though she has previously served a 16-month ban after testing positive for the steroid DHEA in late 2013.

But David Marsh, head coach of the US women's Olympic team, said there was a long way to go.

But both said anti-doping officials globally need more resources and scope for "investigative" procedures beyond testing of individual athletes, such as following up on allegations by whistle-blowers.

Marsh noted that while much has been made of the "systemic" doping uncovered in Russia, which included sports beyond athletics, "that's not the only nation that has had patterns of behavior that seem to go beyond the norm".

China has again come under scrutiny this year.

The country whose star distance freestyler Sun Yang served a brief drugs ban in 2014 was alleged to have covered up positive tests in an article in The Times.

"There's nothing that we can say or do right now that's going to impact what's going to happen with the Russian or Chinese swimmers," Wielgus said.