PARIS - Gareth Bale's Wales meet Northern Ireland in the Battle of Britain at Euro 2016 on Saturday with mounting pressure on the last 16 teams to claim a quarter-final place. 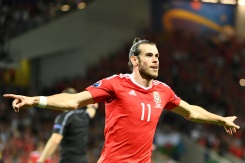 Tens of thousands of fans from Wales and Northern Ireland poured into Paris on every available plane and train for the match at the 45,000 capacity Parc des Princes.

"We don't have tickets but just had to be here," said Gerry Floyd of Belfast who arrived with his wife Deirdre. "I'll pay if we can get places if not we will go to a bar with the others."

With Real Madrid star Bale scoring in every game he has played so far, Group B winners Wales start as favourites against Northern Ireland who squeezed through as one of the best third placed sides.

"We've been in some bad places. We were 112th in the world and now we're in the last 16 of the Euros. These are the days to enjoy," said Bale.

"I want my team to play with loads of emotion; I want them to fully understand the significance of the game," O'Neill said.

The prize will be a quarter final against the winner of Sunday's game between Hungary and Belgium.

The winners' of Saturday's other two games will play each other in the quarter-final.

Ronaldo will be the only captain in the last 16 not to have won a game yet at the tournament. Portugal drew their three group games to claim one of the spots for leading third-place nations.

He is likely to face a Croatia who will welcome back his Real Madrid teammate Luka Modric and striker Mario Mandzukic from injury.

"Ronaldo is their main player, the aim is not to allow them to show how strong he is, we have to limit him," said Cacic.

Portugal coach Fernando Santos bemoaned his side's luck in front of goal in their group games and hopes they get some in the rest of Euro 2016.

"If we continue to draw and reach the final (on penalties) it is no problem."

Poland are one of only two teams left, with Germany, who have not yet conceded a goal. But they will need star striker Robert Lewandowski to start firing against Switzerland.

The 27-year-old Bayern Munich star was the top scorer in Euro 2016 qualifiers with 13 goals. But he has yet to open his account at the finals in France.

Polish fans are nervous, even if coach Adam Nawalka said there is no problem with Lewandowski's play. "He is doing a great job for our side and is an important part of the team."

Switzerland have scored only twice so far and coach Vladimir Petkovic said: "We need to focus on the killer pass and killer cross to players inside the box."

A host of top clashes will follow including hosts France against the Republic of Ireland and world champions Germany against Slovakia on Sunday.

The France game will be in the spotlight because of an incident between the two nations in November 2009.

During a 2010 World Cup qualifier, French striker Thierry Henry handballed to set up an equalising goal for William Gallas. Irish fans have never forgot even though the Irish team say now that revenge is not a factor.

Euro 2012 finalists Italy and champions Spain play Monday in the most awaited clash. England play Euro fairytale side Iceland in the final game of the last 16 in Nice.