RIO DE JANEIRO - Officials in Brazil claim the Rio Olympics will bring lasting benefits, but did the country's hosting of the World Cup two years ago manage to help local people? 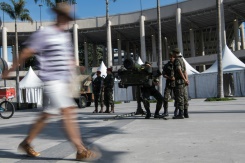 Brazilian paratroopers stand guard with an anti-aircraft missile outside the Maracana stadium in Rio de Janeiro. the stadium was renovated for the football Wortld Cup

"There were parties, music, great food and fun people, but we continue to cultivate this image of doing things under the wire at an elevated cost, without adequate planning," said Paes.

The Brazilian government told AFP hosting large events is an education, and helping the South American nation to grow.

"Brazil is a developing country that has taken advantage of opportunities to organize major events like the 2013 Confederations Cup, the 2014 World Cup and the 2016 Olympics to build a culture that puts more emphasis on planning and efficiency," a spokesman at the sports ministry said.

Newly constructed or renovated football stadiums are the most obvious World Cup legacy.

Some are regularly used, like the Sao Paulo Corinthians Arena or Rio's Maracana stadium, but others sit vacant.

The much touted Arena da Amazonia in Manaus -- where England lost to Italy -- now hosts just a handful of matches a year.

Local leagues complain that their low attendance can't support the high costs of holding matches there. To prevent the Amazonia from becoming a ghost stadium, prestigious Rio clubs occasionally play there.

The sports ministry says it's not responsible for maintaining World Cup stadiums, and that managers must seek out partners to find alternative, multi-purpose uses for the arenas.

Corruption allegations swirl around World Cup legacy projects in places like Fortaleza, where tram stations have become dumps, and Sao Paulo, where elevated monorail construction has dragged on into 2016.

The renovation of Rio's Maracana stadium is the focus of a corruption probe linked to the Petrobras mega-scandal that has shaken Brazilian politics to its foundations.

The project soared past its anticipated cost of 705 million Brazilian reais (about $214 million today) to 1.2 billion reais ($364 million), billed to Brazilian taxpayers.

In the lead-up to the world's premier football event, millions of Brazilians took to the streets demanding the government invest in education and health rather than sports arenas.

Public anger continues to swell as Brazil descends into political and economic turmoil.

Now, after a World Cup that seemingly left little benefit -- not to mention the host's humiliating 7-1 semi-final loss to Germany -- many question the prospects of a positive Olympic legacy.