RIO DE JANEIRO - Michael Phelps, who worked late to bag his 19th Olympic gold medal, was back at it on Monday, securing his semi-final berth in the 200m butterfly in Rio de Janeiro. 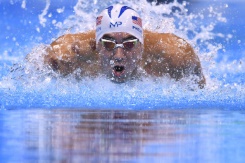 The 31-year-old superstar admitted he wasn't at his perkiest after helping the United States to a scintillating 4x100m freestyle relay win shortly before midnight on Sunday.

"I probably got to sleep at 3:00 am and was on an 11:00 am bus, so quick turnarounds," Phelps said. "But the good thing is we have a long time between the prelims and finals, so we are able to rest. Hopefully I'll get home and get a quick nap in and be ready for tonight."

Katie Ledecky and Sarah Sjostrom also had a quick turnaround as they tackled the 200m freestyle heats after world record-setting wins on Sunday night.

"It was pretty hard coming off of last night," said Ledecky, who was accepting her 400m freestyle gold as the clock struck midnight.

"Just got a couple hours of sleep, but I think that was probably going to be my hardest swim of the week so I'm glad it's over with."

As usual, Ledecky didn't make it look hard, winning her heat in 1:55.01 to lead the way into the semi-finals ahead of Australia's Emma McKeon (1:55.80) and Sjostrom -- who became the first Swedish woman to win an Olympic swimming gold when she lowered her own world record in the 100m butterfly on Sunday.

World record-holder Federica Pellegrini of Italy, the two-time 200m free world champion, produced the fifth-fastest time of the morning of 1:56.37, ahead of China's Shen Duo.

"I'm going step by step towards the final," Pellegrini said, "but I think it's going to be the fastest 200m in history. We have never seen heats as quick as this."

Hungary's Katinka Hosszu, with a world record and gold medal under her belt in the 400m individual medley, opened her bid for a medley double with an Olympic record of 2:07.45 in the 200m IM heats.

Hosszu's "Iron Lady" reputation will be tested Monday night as she swims the medley semi-finals slightly more than an hour after going for gold in the 100m backstroke final -- in which Australia's world champion Emily Seebohm will be out to improve on the silver she claimed in London.

Other finals on Monday include what promises to be a men's 200m freestyle thriller, with world record-holder Paul Biedermann of Germany, world champion James Guy of Britain and China's Sun Yang among the contenders.

There's an extra edge to the women's 100m breaststroke final as American Lilly King, a first-time Olympian who topped the semi-final times, and defending champion Ruta Meilutyte take on Russian Yulia Efimova -- who was cleared to compete in Rio after a convoluted doping case.

Efimova was banned, reinstated, banned and reinstated again this year as governing body FINA and Olympic officials wrestled first with her positive test for recently banned meldonium -- which came after an earlier suspension -- and then with the fallout of revelations of state-sponsored doping in Russia.

She was showered with boos in the heats and semi-finals, and King admitted taking her on added spice to the final.

"I'm up for the challenge," King said.