SALTA (ARGENTINA) - Argentina have retained the team that started in a last-gasp defeat by South Africa last weekend for the Rugby Championship return match in Salta Saturday. 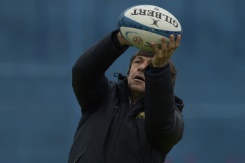 Coach Daniel Hourcade named the same XV Thursday and made only one change to the replacements with utility back Lucas Gonzalez Amorosino taking the place of Ramiro Moyano.

The Pumas led the Springboks by 10 points with 10 minutes left in Nelspruit last Saturday only to concede two tries and lose 30-23 in the opening round.

"We controlled the game for 70 minutes in South Africa before making mistakes that proved costly," said Hourcade.

"There are issues to correct and others that we have to repeat in order to prevent the Springboks playing their game."

The teams have met once before at Estadio Padre Ernesto Martearena in north-western city Salta with a late penalty giving South Africa a 33-31 victory two seasons ago.