HONG KONG - Formula E's chief played down comparisons with F1 and said the all-electric racing series had pointed the way to the future of motoring as it gears up for its third season. 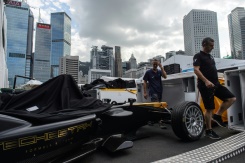 An influx of major manufacturers and a schedule that includes Hong Kong, Paris and New York underline the momentum of the electric car trend, chief executive Alejandro Agag told AFP.

"I think the objective of Formula E is to change the perception of electric cars and encourage people to buy electric cars," the Spanish businessman said, ahead of Sunday's season-opening race in Hong Kong.

Formula One has proved a potent tool in promoting Hong Kong's Asian rival Singapore, but Agag said it was unfair to compare Formula E with its much larger precursor.

While high-octane F1 has built up its following over decades, Formula E, the world's first electric racing series, only started in 2014 and has different objectives, he said.

"But racing electric cars promotes a different technology. And I think the association with Hong Kong, the values of sustainability and a clean city, go together well with Formula E.

"So if you want to promote those values it's going to have a major impact."

Manufacturers Renault, Jaguar, Audi and BMW are already involved in Formula E, while Mercedes has taken an option to enter a team from 2018.

Agag said he was also in talks this week with Brazilian driver Felipe Massa about joining a Formula E team when he retires from Formula One this season.

"The momentum is fantastic, not only for Formula E but for the electric car concept in general," Agag said.

"Now there is a belief that the future is going to be electric and that electric cars are going to be the main way of moving around in 20, 30, 40 years.

It is the template for Formula E, whose compact tracks can be squeezed into built-up areas, allowing it to go to cities including Buenos Aires, Monaco, Berlin and Montreal this season.

"We don't think we compete at all with Formula One. Also because Formula One couldn't race here," Agag said.

"This is ideal for Formula E: the track is shorter and we can fit on the streets and we make a lot less noise... we are ideal for small tracks in the heart of cities."

The technology is still evolving: even in a race that only lasts 50 minutes, drivers have to swap cars halfway as their batteries won't go the distance.

But Agag said advances made in Formula E were now migrating to road cars, with Renault recently unveiling a prototype electric car with similar technology.

"Major manufacturers are coming into Formula E because they see this is a platform to develop technology that then they can use on road cars," he said.

The death toll from the Mountain B nightclub fire has risen to 16, officials said on Wednesday, with dozens more still in hospital.

What we know of the symptoms and spread of monkeypox

With monkeypox surging across the world, experts are gathering more evidence on how people catch it and its typical symptoms.

KYIV, Ukraine: Ukraine on Wednesday accused Russia of rocket strikes that killed 13 civilians in areas near a Russian-held power plant, where renewed fighting has raised fears of a nuclear disaster.

Michael serious about getting job done