WATFORD (UNITED KINGDOM) - The future of next month's Turkish Airlines Open golf tournament was called into question after rocket attacks in the tourist region of Antalya on Friday. 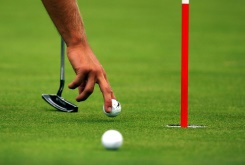 "As a matter of priority, we are currently investigating today's incident in the Antalya region with our security consultants and local authorities," said a European Tour spokesperson

Several ambulances and police vehicles were sent to the scene on the road between Antalya city and the resort of Kemer to the west, the Dogan news agency reported.

Although the attacks took place some 90 kilometres from Belek, the venue for the European Tour golf tournament, they prompted officials to contact organisers and security consultants to see if they should still go ahead with the November 3-6 event.

"As a matter of priority, we are currently investigating today's incident in the Antalya region with our security consultants and local authorities," said a European Tour spokesperson on the sidelines of the ongoing British Masters event at The Grove course near Watford, north of London. "We will update further as soon as possible."

Four-time Major winner Rory McIlroy was set to headline the third staging of the event, to be held on the Regnum Carya Golf & Spa Resort course in Belek.

Just 70 players are due to tee-up in the first of the three Final Series events on the European Tour.

Tiger Woods had been due to compete but he withdrew saying he felt his game was not up to playing a tournament golf -- the same reason the American star gave for pulling out of this week's US PGA Tour's Safeway Open in California.

In June, the Ladies European Tour cancelled their Turkish Airlines Open Women's Open, also due to be held in Belek, after expressing fears over player safety.

No one was wounded or killed during Friday's attack but reports said one theory was that the attackers were trying to hit a tanker ship moored nearby.

However there was no official confirmation of this. Situated on the sun-drenched Mediterranean coast, the Antalya region is one of Turkey's most popular tourist destinations, although numbers have plunged this year as repeated terror attacks in the country have kept visitors away.