WELLINGTON - Shot put queen Valerie Adams received one of New Zealand's highest awards on Saturday, being made a dame in the New Year honours list. 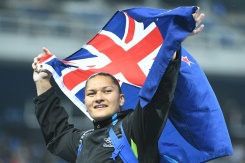 The four-time World champion, double Olympic gold medallist and one of New Zealand's most popular sports stars, has been made a dame companion of the New Zealand Order of Merit for services to athletics.

"Thank You NZ. Very honoured and humbled to be bestowed this award," Adams tweeted.

At 32, Adams is the youngest person to be made a dame or knight in New Zealand. World squash champion Dame Susan Devoy and Mt Everest conqueror Sir Edmund Hillary were both 34 when they were honoured.

A dame or knight companion is the country's third highest honour behind the Order of New Zealand, which is restricted to 20 living members, and the knights and dames grand companion, which is limited to 30 living people.

Adams finished second to American Michelle Carter at the Rio Olympics this year but she said that was not a sign her stellar career was on the wane.

"One thing I have said is that I'm not done yet so watch this space," she told Fairfax Media, although she has yet to confirm if she will compete at the world championships in London next August.

Adams said she could not compare her elevation to damehood to her sporting success.

"With an Olympic gold medal, basically people look at the strength of the person, the high performance," she said.

"You can't really rank it. This is a very prestigious award that you would never imagine was possible."