Kiatisak confident of getting right result 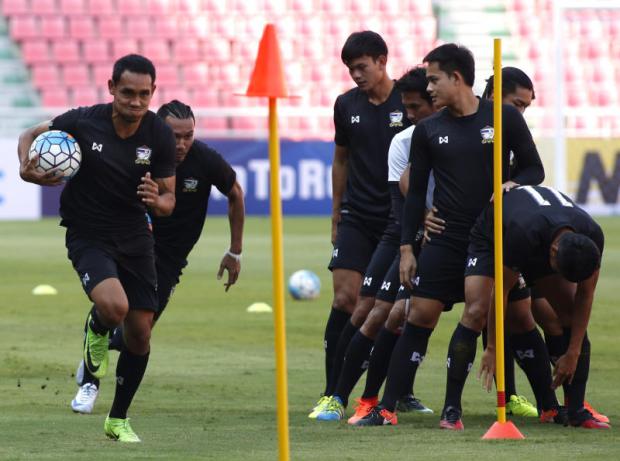 After five games in the six-team Group B of Asia's final qualifying round for the 2018 World Cup, the Saudis have 10 points while the Thais have only one from their 2-2 home draw with Australia in the previous match.

However, Thailand coach Kiatisak Senamuang is brimming with confidence that his men will secure their first win of the campaign.

Thailand narrowly lost 1-0 to Bert van Marwijk's men in Riyadh in their opening game thanks to a debatable 84th minute penalty.

Kiatisak still believes it was not a penalty and said Thailand do not need luck to beat Saudi Arabia today.

"I told my players on that day that the Saudis were lucky. Tomorrow we will beat them. We do not need luck or biased officiating. We know what to do to beat them,'' Kiatisak told yesterday's press conference.

"Although we are at the bottom and Saudi Arabia are leaders of the group, we are not afraid of them. We will play without pressure because we have nothing to lose. The Saudis will be under pressure because they want to beat us. I have told my players to show them that we are not a team they can beat easily.

"We will play for late King Bhumibol Adulyadej and His Majesty the King."

"I think Saudi Arabia were much better than they are now. In those days, we often lost to them by four to five goals. In our first meeting [of the current World Cup qualifying round], we played well and lost only by one goal."

Thailand's strike force will be led by Teerasil Dangda who scored both goals against Australia, while the defence will be marshalled by captain Theerathon Bunmathan.

Van Marwijk said: "This is an important game for both teams. We arrived here six days earlier to prepare the team and I think we are ready for the game with Thailand."

The Dutch coach, who guided his country to the 2010 World Cup final, will be without defenders Osama Hawsawi and Hassan Fallatah through suspension and he admitted this could affect his team.

"I will be a different game from the first game in Riyadh. We cannot underestimate Thailand. We know that they are strong at home," he said.

"We know that the Saudi Arabian people want to see our team qualify for the World Cup finals in Russia.

"Pressure is good for the team but there should not be too much pressure. We are here to play our best and win the game."

The other teams in the group are Japan, the United Arab Emirates and Iraq.

The top two teams of Group A and Group B earn tickets to Russia 2018.

The two third-placed teams meet in a play-off with the winners facing a Concacaf side for another berth.

In today's other Group B games, Japan are at the UAE while Iraq host Australia.

At Al Ain, Japan coach Vahid Halilhodzic is confident that his players can overcome the loss of captain Makoto Hasebe for today's vital World Cup qualifier away to the UAE.

But the Bosnian coach refused to reveal who would take the captain's armband.