Last year, Leicester City won the Premier League title at pre-season odds of 1,500-1 for one of the most stunning achievements in sporting history. 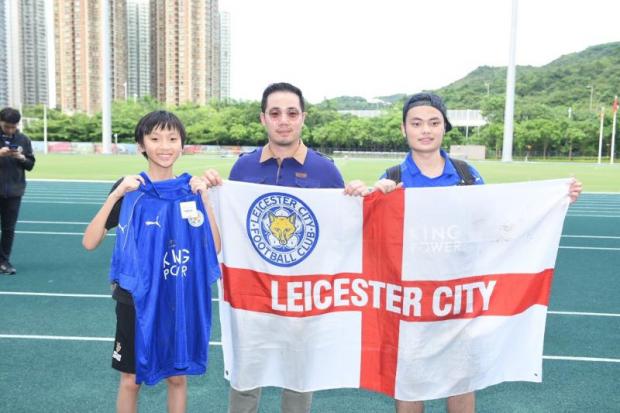 This year, the Foxes were only able to secure their status in the English top flight with a fine run in the home stretch after they sacked manager Claudio Ranieri and replaced him with Craig Shakespeare.

"Everybody at the club wants such a 'miracle' to happen time and time again," said Leicester vice-chairman Aiyawatt Srivaddhanaprabha.

"But that is a difficult task. We may be a 6,000-1 underdog to win our next Premier League title."

Knowing that Leicester are no match for the likes of Manchester City, Manchester United and Chelsea in terms of financial prowess, Aiyawatt said his club will only buy players who can go straight to the first team.

Leicester have brought in only three players in the current transfer window -- midfielder Vicente Iborra from Sevilla for £12.5m, defender Harry Maguire from Hull City for £17m, and goalkeeper Eldin Jakupovic from Hull City for an undisclosed fee.

"We only buy players who can play for us," said Aiyawatt.

"We will sell players who can't play for us."

On the other hand, Leicester lost a couple of fine players after their shocking success, particularly combative midfielder N'Golo Kante who was a key player in Chelsea's title-winning campaign last term.

This time, the Foxes could see the departure of Algeria winger Riyadh Mahrez, who is reportedly being targeted by several clubs especially Arsenal.

Ahead of Leicester's match against Liverpool in the Premier League Asia Trophy final in Hong Kong last Saturday, Aiyawatt was asked on several occasions about the future of the dazzling winger.

"We have not yet received a 'serious' bid for Mahrez," said Aiyawatt.

"He is still our player. He still has to work hard and play well for us if he wants a move."

However, Aiyawatt knows that the club may be unable to prevent him from leaving King Power Stadium.

"Everybody wants to play for a big club. If he is to move, then his transfer fee should be higher than what has been reported by the press [in the region of £50 million]," Aiyawatt said.

Also in Hong Kong, Shakespeare said the club had turned down an offer from Italian side AS Roma for Mahrez.

"The bid was politely declined because it was a low offer," said Shakespeare.

Mahrez was a key figure for the Foxes in their remarkable title-winning run in the 2015/16 season, scoring 17 goals and making 10 assists, which earned him the PFA Player of the Year award for 2016.

Despite not being as prolific last season, the 26-year-old who joined the Foxes from French side Le Havre in 2014 still netted 10 goals last season.

But it will be extremely difficult for Leicester to rub shoulders with the likes of Manchester United and Liverpool in terms of popularity, even in Thailand, the country of their owners.

Hong Kong Stadium became a sea of red when Leicester played Liverpool there.

Aiyawatt admits that it is not likely that Leicester will be as popular as United or Liverpool in Thailand.

"We just want Thai fans to treat Leicester as their second beloved team after the likes of Manchester United and Liverpool," said Aiyawatt.

King Power Group has launched a project called "King Power Thai Power" with the goal of supporting a sustainable society through sport.

The group's CEO Aiyawatt said: "King Power wants to see Thais demonstrate the power of creativity on the global stage. The company has therefore initiated a project called King Power Thai Power to enhance and sustain the potential of the Thai people in all dimensions."

The first component of the initiative is "Sport Power" which is the first football project to create a roadmap for the promotion and development of young footballers throughout the country, he said.

As part of the Sport Power scheme, King Power is investing more than 200 million baht to construct international-standard artificial turf fields at schools nationwide, allowing the Thai youth to have places to exercise and hone their skills, Aiyawatt said.

He said this year, the company aims to contribute these fields to 20 schools and reach its target of 100 schools by 2022.

Moreover, the company will contribute one million soccer balls, enabling the young Thai people to practise their football skills, he added.

In addition, the company has organised various activities that support the youth in pursuing their dreams of becoming professional football players.

These include the Fox Hunt, Leicester City football clinic and King Power's Cup.

The King Power's Cup and Fox Hunt provides scholarships for footballers to study and train in the UK.

"The company is working to increase opportunities for the Thai people to become professional football players on the global stage," Aiyawatt said.

Young Thai players Tawin Mahajindawong and Somprasong Promsorn have been selected to play for the club in Belgium's second tier.

Tawin said he was glad to get this opportunity as this marks not only a new step in his life but also provides a learning experience that will improve his skills.

Now, Tawin is ready to show off the power of the Thai people and gain international recognition.

"I have Khun Aiyawatt as my role model. He successfully strengthened Leicester to win the Premier League and that has helped enhance the reputation of the Thai people," Tawin said.

A non-conquering hero! Flitcroft: The Phantom of the Open