The draw for the FA Cup semi-finals takes place at Rajapruek Sport Club.

The president of the Football Association of Thailand (FAT), Pol Gen Somyot Poompunmuang, has left the door open for national team coach Milovan Rajevac to make a move to China but expressed hope that the veteran Serb would stay with the War Elephants.

Somyot was on Thursday reacting to reports that a Chinese Super League club is interested in the services of Rajevac, under whom the Thai national side has shown signs of improvements in a short span.

"It will be his [Rajevac's] decision," said Somyot. "We cannot afford to pay him large sums of money, but if he wants to stay, it will be a great pleasure for us.

"I believe that he will not go anywhere because he has just submitted his plan for the national team to me. 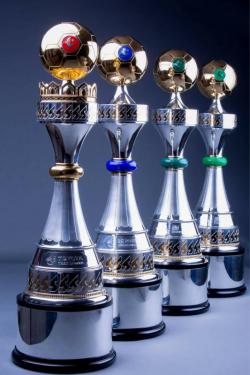 "I know about this so I had a talk with him a few days ago and he gave me his plan for the next year, which is quite important to us.

"Rajevac wants to take the national team to Europe. He believes that countries drawn to face Japan, South Korea, Iran or Saudi Arabia at the 2018 World Cup in Russia will be looking for some warm-up matches with Asian teams.

"It is a sound proposal and Rajevac has good contacts in Europe so such matches can be arranged for the national team during the international and Fifa breaks."

"His plan gives me hope that he will stay."

Somyot added: "Right now, we can see that some teams in the Chinese Super League are spending big amounts of money to bring some good players and coaches.

"If Rajevac wants to go for financial or any other reasons, we will have to let him go."

Rajevac's contract with the FAT will end in May 2018.

Meanwhile, Bangkok United are fancying a crack at this year's FA Cup title as they have been drawn to face Thai League 4 side JL Chiang Mai United in the semi-finals.

The official draw for the semi-finals of the tournament was held at Rajapruek Sport Club on Thursday.

Both matches will be played at neutral venues in Bangkok on Nov 1 at 7pm.

Chiang Rai and Muang Thong will face off at Rajamangala National Stadium, and JL Chiang Mai, the first fourth-tier side to reach the FA Cup semi-finals, will play Bangkok United at Supachalasai Stadium.

These trophies have been designed by the same company that made the English Premier League trophy and will be presented to winners of the league contests this year.