On Sunday evening an ageing Thai rock star with hooped earrings, signature bandana and a wispy moustache will be at the home of English football to present the Carabao Cup to either Arsenal or Manchester City.

His prominence will baffle many football fans, not to mention some of the players celebrating the first silverware of the season at London's Wembley Stadium. 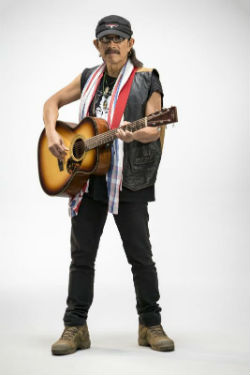 But here in Thailand, the 63-year-old Yuenyong Opakul is a legend.

He is the lead singer of the band Carabao, and co-founder of the energy drink company now sponsoring the English Football League (EFL) cup.

Its giddying ascent since 2002 now sees Carabao outsell Red Bull in Thailand, where hundreds of millions of dollars' worth of the sugary beverages are slurped down each year.

With an eye on new markets, Carabao has ploughed cash into English football, hoping for a fast-track to global brand recognition.

The company has spent 30 million pounds (1.3 billion baht) to sponsor Chelsea's training kit, a further £18 million on a three-year EFL cup contract as well as paying to have its name emblazoned on Reading FC's strip.

It's been a "very successful" investment so far, says Add.

"English people are very focused on football. They didn't know us before but people are talking about the brand now," he says sitting in his large garden in a Bangkok suburb.

Thai money and English football have had a strong chemistry ever since billionaire ex-prime minister Thaksin Shinawatra bought Manchester City in 2007.

He flipped it just over a year later for a handsome profit to Sheikh Mansour of Abu Dhabi whose oil fortune has hoisted City into football's elite.

Thailand's duty-free magnate Vichai Srivaddhanaprabha was next in, buying Leicester City for about £40 million (1.8 billion baht) in 2010 and clearing the club's large debts.

Sheffield Wednesday are owned by Dejphon Chansiri of the Thai Union family -- the world's biggest tinned tuna producers -- while Singha beer has partnered with Manchester United.

"This strategy is not new. Red Bull has done it before with Formula 1 and extreme sports," she added of the part Thai-owned energy drinks firm. 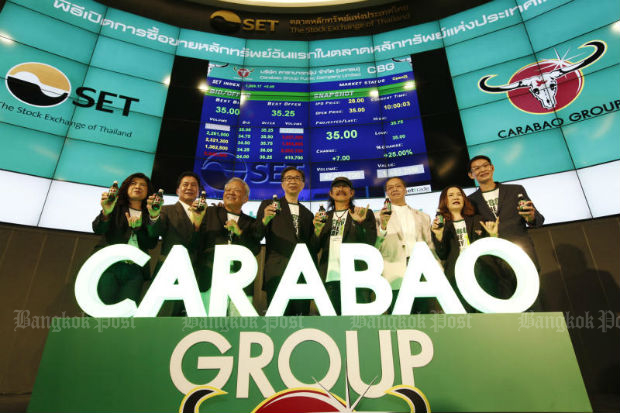 Executives of Carabao Group (CBG) and the Stock Exchange of Thailand (SET) celebrate the debut of CBG shares on the SET on Nov 21, 2014. (Photo by Pattanapong Hirunard)

Add Carabao is no stranger to brand-building.

The one-time architecture student who studied in the Philippines, hence the band's Tagalog name, has spun fame and fortune from his distinctive pheua chiwit country-rock style, rasping voice and acerbic lyrics skewering corruption, inequality and forces of reaction.

He designed the skull-and-horns Carabao logo, which is across band paraphernalia -- and even copyrighted a hand sign that represents the eponymous buffalo.

The band has toured Thailand for more than three decades cultivating a loyal base of nostalgic fans but also youngsters drawn to his stage presence and lyricism.

"Like BB King I'll keep playing until I die," Add says with a smile, tucking a streak of black hair into his bandana, a Carabao-branded mug on the table in front of him.

The band emerged in the early 1980s with an unabashed pro-democracy agenda following a decade of political turbulence when crackdowns killed hundreds of student activists.

Several songs were banned by authorities, gifting Add something of a bad-boy reputation.

But age and commercial success have diluted Add's taste for controversy, more so in the social media age where junta-run Thailand's sharply polarised politics tend to chew up anyone who speaks out.

"I am not on anyone's side," he says, rejecting criticism he has sold out. "But if the people aren't educated about democracy, we cannot move forward."

Carabao is a colourful name for a trophy that has traditionally relied on more parochial sponsors, including Britain's milk board and Rumbelows, a now-defunct white-goods retailer.

In June, the EFL was forced to apologise after error-strewn graphics appeared on their online broadcast of the first-round draw for the Carabao Cup.

The third-round draw stirred more consternation after it was held in Beijing, demanding a pre-dawn wake-up by British fans to follow it live.

As he prepares to travel to London for the cup final, the genial singer is in similarly uncompromising mood.

"I'll be dressed cool... maybe in a suit because it's cold, but everything else's the same," he said.