Thailand enjoyed their most successful day so far at the Asian Games in Indonesia Wednesday with two expected gold medals in sepak takraw and a surprise victory in paragliding.

The Thais have now won four gold medals at Jakarta Palembang 2018, having claimed the top prize in the women's poomsae (dance) team event in taekwondo on Sunday.

The Kingdom aim to win 17 gold medals at the 18th Asiad which ends on Sept 2.

In sepak takraw, Thailand stamped their supremacy over arch rivals Malaysia with a commanding 2-0 victory in the title showdown of the men's team regu event.

Apart from some scattered unforced errors, Thailand dominated the Malaysians, winning the first two match-ups to make the third redundant as the Thais claimed their fifth straight title in the men's team regu competition. 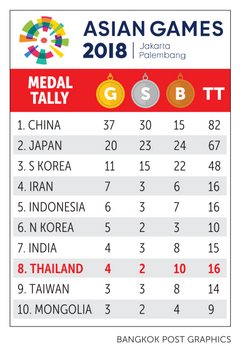 The Thais were led by Pornchai Kaokaew, the country's most decorated Asian Games athlete with nine gold medals.

The Thai women also managed to win their team regu final against South Korea 2-0, but only after being repeatedly challenged by their spirited opponents.

Thailand, spearheaded by Somruedee Pruepruk, took the field as overwhelming favourites but there were occasions when the eventual gold medallists had to play out of their skins to rally past the South Koreans.

The Thai sepak takraw stalwarts are hoping to match their four-gold haul at the 2014 Incheon Asian Games in Indonesia, where they are under pressure to sweep all four events they have been allowed to compete in this year.

There are six events in sepak takraw at the 2018 Asian Games but Thailand's participation has been restricted to four only because of their dominance in the discipline.

It is among a number of regional sports fighting for inclusion at the next Asian Games in Hangzhou, China but Kamol said he is "pretty confident" it will get the nod.

"Every year there is a strong team joining and each country is performing better and better," he said, above the cheers and drums of the travelling Thai supporters.

"It's such an exciting sport to watch so we should get an academy going, teach it more and spread the sport."

Thai sepak takraw star Siriwat Sakha, a giant among his compatriots at 1.86m, said the sport's athleticism, thrills and long history mean it should not be dropped.

He dared to go even further, saying that getting sepak takraw into the Olympics one day is one of his "biggest dreams".

The full programme of events to be included at the next Asiad in 2022 has not yet been confirmed. The Olympic Council of Asia (OCA) has so far only ratified the 33 sports which will be competed at the 2020 Tokyo Olympics.

Nunnapat had a big lead in the individual event and is likely to be crowned champion at the end of the contest Thursday, Thai officials said.

The Thai accuracy team for men's event also did not disappoint, bagging the bronze medal behind winners Indonesia and South Korea.

Thai shooter Naphasawan Yangpaiboon set a new Asian Games record by amassing 34 points in her routine 40 shots in the women's 25m pistol event but had to settle for silver.

Rahi Sarnobat scripted history by becoming India's first ever woman to win a shooting gold at the Asian Games, edging the Thai star in a shoot-off.

Sarnobat also shot a score of 34 in the final to tie with Naphaswan.

There was more drama in store as both Naphasawan and Sarnobat managed to score four in the first series of the shoot-off which necessitated a second series of five shots.

Sarnobat hit the the target on three of those five shots while Yangpaiboon only managed to hit two, allowing the Indian to win 3-2 in the shoot-off.

In taekwondo, Olympic silver medallist Tawin Hanprab was upset 29-21 by Saudi Arabia's Hamad Mabrouk Almabrouk in the opening round of the men's 63kg class.